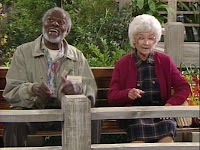 Crazy Continuity
If Fernando is such a treasure to Rose why is he never mentioned again? Canny viewers will also note Rose did have a prized teddy bear companion in Season 1, but his name was Mr. Longfellow.  Perhaps they had a falling out? Also, in a rare moment Sophia references the little person that Rose dated back in season 1.

That’s What She Said
Alvin's daughter: “They're really quite a pair aren’t they?”

Tales from the Old South
Blanche: “It's just so inspiring the way those Sunshine Cadets volunteer for community service. You know, back home, we didn't have a community organization for females. Unless you count Miss Maggie's house on the hill. Those girls would stand on their heads for you. Course I heard that cost you ten bucks extra.”

Product Placement
Daisy: “In Sunshine Cadets, we learn you have to pay for your mistakes. This one’s gonna cost you a ten speed Schwinn.”

Sassy Sophia
Dorothy: “Hi Ma, where you going?”
Sophia: “Down to the boardwalk. I like to sit and watch the old guys rearrange themselves when they come out of the water.”

Lewd Ladies
Sophia: “I never went to bed with Alvin, the thought never crossed my mind which is odd because I always wondered about that myth.”
Rose: “There’s a myth about people named Alvin?”
Sophia: “The myth about black men in the bedroom.”
Rose: “Is that a Greek Myth?”

Zbornak Zingers
Dorothy: “Now look, Rose, this has to stop. Now you have been carrying on for a week. It was only a toy animal.”
Rose: “Fernando was more than that. He was full of life, he was full of love-”
Dorothy: “He was full of stuffing, Rose.”

Insult Watch
Blanche: “This is the best looking outfit you own.”
Dorothy: “You're right. I still look damn good in this thing.”
Blanche: “Well, I don't know about 'damn good.' That particular design does tend to accentuate your behind while simultaneously diminishing your cleavage.”

Best of B.E.D.
Blanche, about the Sunshine Cadets: “I so admire your motto: Spread it around!”
Dorothy: “That’s sunshine. Spread sunshine around.”

Golden Quotes
Rose: “Just cut the crap and get back the damn bear!”

Dorothy: “Listen, Daisy, I don't like being intimidated, I do not like being threatened and frankly, kid, I don't like you. I am not gonna buy you anything, and I am going to tell your folks what you're doing and then I'm going to call the school for bad girls and they will come and pick you up and put you in a sack and take you away and you will never eat ice cream or play jump rope again!”
Daisy: “Get real, grandma.”

Critique: This is a good season opener. The two plots don’t have much in common except for displaying how close two different sets of friends can be. Sophia gets her own delightful B-story though it does get serious and overly sentimental by the episode’s end (though Estelle did deservedly win her Emmy for this episode after all). Most of the comic relief comes from the A-story with Sunshine Cadet Daisy (Jenny Lewis from 80s classics “Troop Beverly Hills” and “The Wizard”) who is evil incarnate. She refuses to return Rose’s teddy bear and even demands a ransom (“Dorothy, she sent me one of his ears!”). Rose’s eventual, and simple, solution is absolutely perfect; Rose is great when she shows her mean streak. B+
Posted by Chris at 11:34 AM