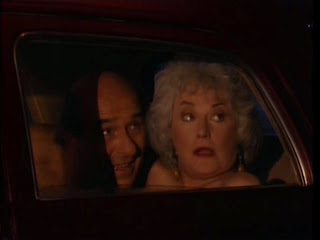 Synopsis: After finding success with the Zbornie, Stan begins to woo Dorothy; Rose deals with a woman at work whom she finds annoying.

90s Flashback
Rose: “Oh, Sophia, did we wake you again?”
Sophia: “No, I'm up because I'm feeling frisky. What say we get out the Ouija board--”
Blanche: “Oh, Sophia, you already said that.”
Sophia: “It's the middle of the night. You want something fresh, turn on Letterman.”

Sophia: “Excuse me, Abby. I'd like to inject some candor here. I'd also like to inject a tranquilizer dart into your backside. But my dart gun was confiscated after the incident with the trick-or-treaters. In my defense, it was dark, and I was unaware of this Ninja Turtle craze. But I digress.”

…Until the Buffalo Pooped
Mr. Percy: “Excuse me. Can I get your attention, please? I'd like to clear the air.”
Sophia: “Don't look at me I haven't had a raw vegetable in six months.”

That’s What She Said
Blanche: “Dorothy, the man sent you meat.”

Lewd Ladies
Blanche: “Dorothy Zbornak, did you do what I think you did tonight?”
Dorothy: “I don't know what on earth you're - YES.”
Rose: “I can't believe this…”
Blanche: “How could you sleep with that man?”
Rose: “She slept with him??”
Blanche: “What did you think she did?”
Rose: “Well, she looks like she was pushing his car.”

Picture It
Sophia: “It's a good thing I'm up, because it so happens that I have a story for you, the sex story to end all sex stories. Sicily, 1922. I stop by a little trattoria... No, wait. I'm thinkin' of the best meal I ever had.”

Insult Watch
Dorothy: “I don't need to rehearse.”
Blanche: “Oh, I think it's a good idea, Dorothy. If you like, I'll be Stan.”
Sophia: “Beat it. I already got dibs on Stan. You be Dorothy.”
Blanche: “Don't be stupid. Besides, Rose ought to be Dorothy.”
Rose: “No, thanks. But I'll play Stan.”
Sophia: “Well, I'm not playing Dorothy, although playing a sap on stilts would be a cakewalk. No offense, Pussycat.”
Dorothy: “None taken, you cankerous little prune.”

Product Placement
Dorothy: “Ma, did you eat all this candy?”
Sophia: “I was lookin' for the prize.”
Dorothy: “Prizes are in Cracker Jacks.”
Sophia: “Boy, you forget something new every day, don't you?”

Sassy Sophia
Sophia: “As we say back in Sicily, sticks and stones can break your bones, but cement pays homage to tradition.”

Back in St. Olaf
Rose: “So there's this cognitive dissonance between her actual and her ideal self which causes her to be practically dysfunctional. But of course, I'm no psychologist.”
Blanche: “No, you're a nitwit. How come you know those words?”
Dorothy: “Blanche, come on, it's not nice calling her a nitwit. But since the cat's out of the bag. How do you know those words?”
Rose: “I guess it's from reading The American Journal of Abnormal Psychology. It's published in St. Olaf, you know. In fact, my Uncle Gunther used to be the editor.”
Sophia: “And what were you, the centerfold?”
Blanche: “I'm sorry, but I refuse to believe you have ever read a scientific journal.”
Rose: “Believe what you want. See if I care. Hypersexual bitch.”

Rose: “Blanche, I can't get Abby off the phone.”
Blanche: “Tell her a St. Olaf story.”
Rose: “What'll that do?”
Blanche: “Give it a shot.”
Rose: “You know, Abby, something like that happened to me in St. Olaf. Sure, I understand. Yeah, this is a good time to replace the batteries in your smoke alarm. That's odd. She hung up.”

Best of B.E.D.
Blanche: “Dammit, Dorothy, if you'd have sex in public more often, this kind of thing wouldn't happen!”

Rose: “What was the best sex you ever had, Blanche?”
Dorothy: “Oh way to go, Rose. Look, Blanche, it's late, there's only one cheesecake left, so let's make menopause the cutoff point.”
Blanche: “Best sex. Oh, it's just so hard to rate these things. There's degree of difficulty, style points, choice of music. Did they land on their feet during the dismount? Different people have different strengths. It's just impossible to tell, but anything over a nine is excellent.”
Rose: “Over a nine?!”
Blanche: “Points, Rose. Points.”

Sweet, Single-Digit-IQ Rose
Rose: “You're right. Put my foot down. Get it off my chest.”
Dorothy: “Hi, Rose. Where you goin'?”
Rose: “Dorothy, I'm gonna get something off my foot.”
Dorothy: “Good for you, Rose. Careful of the carpet.”

Stan: “Babe, you will never guess what I went out and bought today. It's got whitewall tires, original upholstery, and it's the same one we took to our senior prom.”
Dorothy: “Stan, that's impossible.”
Rose: “No, Dorothy, don't give up. We'll get this.”
Stan: “It's in the driveway right now. 1948, bullet-nosed, and it says ‘Studebaker’ right across the back just like my old one.”
Rose: “OK, OK, no more hints.”
Dorothy: “Rose, head down. It's quiet time.”
[later]
Rose: “Well let’s see, is it something that floats?”

Lesbian. Lesbian? LESBIAN??
Dorothy: “Blanche, I need to talk to you privately. There's this person, someone I've known for quite a while, and lately there seems to be this attraction developing, an attraction I've been trying to deny. [Blanche backs away] Blanche, what are you doing?”
Blanche: “It's a curse. My beauty's always been a curse. I'm sorry, Dorothy, but like the fatal blossom of the graceful jimson weed, I entice with my fragrance but can provide no succor.”
Dorothy: “I'm talking about Stanley, you idiot.”

From Feud to Food
Sophia: “Just be careful. And remember what they taught you at parochial school. Keep both your feet on the ground, no patent leather shoes and macaroni and cheese every Wednesday.”
Dorothy: “Thank you, Ma. She's lost it.”

The Boob Tube
Dorothy: “I gave him a little kiss.”
Sophia: “Trust me, that was no little kiss. That was more like a dental checkup. Your whole head was practically in his mouth.”
Dorothy: “All right, Ma. All right.”
Sophia: “‘A little kiss,’ she says. The man almost digested her. It was like watching a Nova special.”

Reel References
Sophia: “Ever since he made a fortune on that baked potato opener, he's been comin' on to you like gangbusters, and I don't like it. Not that I've ever actually seen gangbusters, but I did see Ghostbusters and I didn't like that, either. I mean, they couldn't give the black guy one funny line? And how about that sequel? Dorothy, what the hell were we just talkin' about?”

Golden Quotes
Dorothy: “Card says these are for me. They're from Stanley. ‘Roses are red, violets are blue. I hope you enjoy this candy. It cost me 42.’ You know - and I'm guessing here - I'll bet you that Stan wrote this himself.”

Dorothy: “I don't want to hear any more about this. And you and I can argue till the cows come home.”
Rose [entering with Blanche]: “We're home!”

Stan: “All the memories we had in that car, huh? The cruising, the drive-ins, the road trips.”
Sophia: “And don't forget the accident you had in that car.”
Stan: “What accident?”
Sophia: “I'll give you a hint. It costs me 10 bucks every Christmas and still calls me Grandma.”

Police officer: “My God, what are you kids doin' in there??”
Dorothy: “It's all right, Officer. We're divorced.”

Rose: “Oh Sophia, you're up. Were we makin' too much noise?”
Sophia: “No, I'm awake because I was feeling frisky. What say we get out the Ouija board and scare up our husbands?”

Dorothy: “It was dark, and Stan stopped the car. I swear to you, I thought I was setting the parking brake.”
Rose: “Well, that's good. Safety first.”

Rose: “I remember the best sex of my whole life.”
Dorothy: “Was it difficult to get out of the relationship afterwards?”
Rose: “No, not really. Poor Charlie died in the middle of it… There was something wild about him that night. Although I did think it was strange when he started yelling, ‘Rose, I'm going! I'm going!’”
Dorothy: “Talk about your mixed emotions.”

Sophia: “Wait a minute. Why were we just telling our Best Sex Ever stories?”
Dorothy: “Gee, I don't - I don't know how it started.”
Rose: “Well, sure you do Dorothy. Remember? You thought you were grabbing Stan's parking brake.”

Sophia: “I won't allow it, not while you're living in my house.”
Blanche: “Sophia, this is my house.”
Sophia: “It is? Oh, right. Then let me give you two words of advice - enough wicker.”

Critique: So apparently the comic strip "Apartment 3-G" ran for 54 years, ending in 2015. I wonder if they ever made it to the next day? But I digress. It must be noted that “Zborn Again” marks Arrested Development creator Mitchel Hurwitz’s first writing credit for The Golden Girls. I can’t say the plot here is all that original. It’s hard to buy that Dorothy would actually fall for Stan all over again, (and again, and again for that matter). But Dorothy and Stan have such great chemistry (thanks to Bea and Herb) that you can’t help but somehwat hope for these folks to end up happy together. I also don't buy that Rose would hate one of her co-workers. There was an entire subplot about Rose's co-worker not liking her for crying out loud. What this episode lacks in plot originality it makes up for with really funny, witty humor and dialogue. Six seasons in, the ladies were more than comfortable in their roles and it shows. Though some character traits became more pronounced around this time. Rose became much more stupid than she ever was. Like yeah she was naive but now she’s basically moronic. And Dorothy, while always a punching bag, really becomes the butt of ridicule that entertains but you get the sense it was taking its toll on Bea. But that’s beside the point because this episode is effing hilarious. So many great lines; one of my favorites being “Dahrathy the man sent ya MEAT.” I'm also sad that we never really got to say goodbye to Enrrrrrique Mas! Anywho, does Rose’s co-worker Abby look familiar to you? The character actress appeared as school bus driver Dorothy Harris in “Forrest Gump” among other things Note: I’m adding a new category called “Lesbian. Lesbian? LESBIAN??” for any and all remaining moments of lesbian tension. Too bad Jean never made a return appearance. GRADE: A- 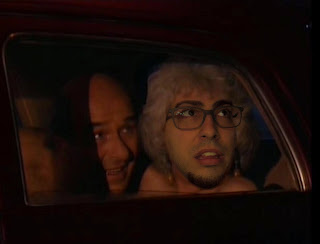