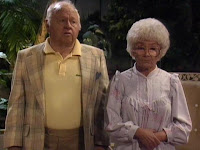 Synopsis: Sophia begins dating a former gangster named Rocco much to Dorothy’s dismay. Meanwhile, Blanche has been secretly reading Rose’s diary and is shocked at what she's read.

80s Flashback
Sophia: “I was at the police station to identify the guy who stole my purse. Rocco was there on a trumped-up charge.”
Dorothy: “Ma, they caught him on a billboard spray-painting something obscene on Spuds MacKenzie.”
Sophia: “The dog they use in those ads is really a female. Rocco was just making Spuds anatomically correct.”

Let’s Get Political
Rose: “Hi, girls. Gee, what's my diary doing here? Next to a pair of pliers.”
Blanche: “Rose, whatever it is you're thinkin', it isn't true.”
Rose: “Good. Then George Bush isn't married to his mother”

Picture It
Sophia tries to tell a story about three friends huddled over a camel cigarette in 1930s Morocco.

Insult Watch
Sophia: “What the hell are you doin' home? I thought you had a four o'clock beauty parlor appointment.”
Dorothy: “I did. They finished with me early.”
Sophia: “On Christie Brinkley, they can finish early. You need every minute they can spare. Now get back there!”

Zbornak Zingers
Dorothy: “I cannot believe my mother is hanging out with that cheap hood!”
Rose: “You mean Rocco?”
Dorothy: “No Rose, I mean Spiro Agnew.”

Tales from the Old South
Blanche: “When George and I were courting and it was getting to the intimate stage, we went for a date in his big old Packard. Well halfway home, we ran outta gas. It was dark, it was cold. So we held each other close. Both of us knew, right then and there, this was the night. Sure enough, pretty soon the windows were all fogged up from the heat generated by our bodies. After we were married, I told George that the only thing that could've made that evening more romantic was if we'd had candles and wine and a big blanket. So, on our tenth anniversary, George fired up the old Packard, and we drove along the same route as on that date, and wouldn't you know, we ran out of gas on exactly the same spot. And George said, 'Blanche, why don't you look behind that tree?' So I did, and there was a basket with candles and wine and two long-stem glasses and a big blanket. We had a perfect evening...”
Rose: “But isn't it a shame you didn't look behind the tree the first time, you could have had two perfect evenings!”

Product Placement
Rose: “I see you’re with two double-crossing ex-friends of mine, I’ll come back later.”
Sophia: “What do you think this is the 7-Eleven? I’m not open all night!”

Sassy Sophia
Sophia: “It’s the last time I let a man toy with my affections, from now on, it’s strictly physical!”

Back in St. Olaf
Rose: “Gee. The most any man ever did for me was getting all his sheep to lie down in a field and spell out my name.”

Crazy Continuity
Dorothy has always maintained that she got pregnant in high school which basically forced her and Stan to marry each other. If they were in high school, how were they old enough to celebrate their engagement with champagne? Not only that, but if Dorothy was pregnant should she really have been gulping down champagne?

Best of B.E.D.
Blanche: “It just goes to show, your hair may turn gray, your skin may wrinkle, but you're never too old to for romance... So don't give up, girls!”

Take Me Out to the Ballgame, Stanley
Dorothy: “Rocco, are you saying that you were in the Mob?”
Rocco: “I ran Detroit.”
Sophia: “The marathon. He ran the Detroit marathon.”

The Boob Tube
Blanche: “Okay, music history. Here goes. What famous Mozart composition, completed in 1787, is a serenade in G for two violins, viola, cello, and double bass in four movements?'”
Rose: “Eine kleine Nachtmusik.”
Blanche: “That's right. How did you know that?”
Rose: “Well they always play it during the chases on The Bugs Bunny-Roadrunner Show.”

Golden Quotes
Dorothy, describing Stan's proposal: “And then I just downed the champagne in one gulp. And it didn't go down smoothly. Later, Stan told me he put my engagement ring in the bottom of the glass… it turned up three days later.”
Rose: “Where’d it turn up Dorothy?”
Dorothy: “On the Home Shopping Network, Rose.”

Critique: First things first. I'm concerned it took Dorothy three days to shit out her engagement ring. Then there's a second thing I always wondered. How exactly does moving in with two pigs save a person money? Speaking of which, I’m still not quite sure why Rose would get so mad at Blanche and Dorothy for reading her diary considering it's only about raising pigs. And why would Blanche just sit in the middle of the living room trying to break open Rose's diary?? But I digress. This is solid episode with a decent storyline for Sophia. I actually kind of find Sophia and Rocco’s romance to be somewhat dull and boring but they are pretty cute together. Mickey Rooney does have great chemistry with Estelle. The episode is notable for some pretty funny moments including the revelation about Rose’s diary (which is kind of stupid but funny anyways) and the story that Dorothy tells about her engagement. That remains one of my all-time favorite “kitchen scenes” (and Rose is particularly stupid in this scene). Overall this is a generally solid, if not particularly outstanding, episode. B
Posted by Chris at 2:45 PM