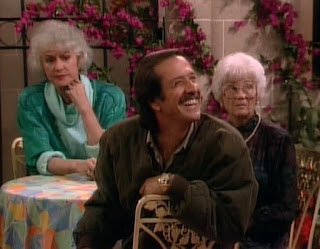 Synopsis: Blanche’s late husband George returns with the news that he faked his death; and as if that isn’t weird enough Sonny Bono and Lyle Waggoner fight for Dorothy’s affection.

Musical Moments
Lyle Waggoner: “I'm so glad we had this time together/Just to have a laugh or sing a song/Yes, it's me.
Hey! Seems we just get started /And before you know it/Oh, go ahead, finish your meals!
Comes the time we have to say, ‘So long.’” [pulls ear]
Dorothy:“I hate it when he does that.”

…Until the Buffalo Pooped
Blanche: “OK, you can all come. But you have to promise me you won't do anything to embarrass me.”
Dorothy: “I promise.”
Rose: “Oh, I promise.”
Sophia: “I'll try, but if they serve me cauliflower it's in God's hands.”

Lewd Ladies
Blanche: “I'm back to my old self. Blanche Devereaux has returned!”
Sophia: “Oh boy, strike up the gland!”

Picture It
Dorothy: “I wanted to tell you sooner, but, well, I was afraid that you might not believe me.”
Sophia: “And why should we, Miss Junior Prom 1946?”
Dorothy: “Ma, you promised.”
Sophia: “’Dating the quarterback,’ she says. Buys her own corsage, spends the evening hiding in the basement, slow-dancing with a rake. Would've gotten away with it, too, but while giving herself hickeys with a vacuum cleaner, she stepped into a puddle.”
Dorothy: “To most mothers, that would be a cry for affection. To you, it's just ammo.”

Sophia: “Picture it - Germany, 1922.”
Rose: “Germany? Were you on vacation, Sophia?”
Sophia: “Spy. Eh, it was a summer job. Anyway, while in Heidelberg, XQ-37 - that's me - meets a man of science. He gives me classified documents, I give him, well, a peek at the hinterland. It's an epic love till it falls to shambles in utter deception.”
Blanche: “He wasn't a man of science?”
Sophia: “He wasn't a man.”
Dorothy: “You're making this up, XQ! I can't believe that you were ever a spy.”
Sophia: “I can't believe I told you. Well, I guess I'm gonna have to kill you.”

Tales from the Old South
George: “Good God, you're as pretty now as the day we met. You remember that first day we met?”
Blanche: “The University Club Cotillion. Our eyes met and I knew you were the only man for me. So when it was ladies' choice, I sent my fiance off for some punch, and I strutted up to you and I said, ‘May I have this dance?’”
George: “And I said, ‘The pleasure would be all mine.’”
Blanche: “And I said, ‘I know it.’”

Product Placement
Blanche: “Oh, come on, Dorothy, how much trouble can I get into in a public place?”
Dorothy: “How soon we forget the Greyhound terminal incident.”

Sassy Sophia
Lyle Waggoner: “Yes, it's me. Lyle Waggoner. No autographs.”
Sophia: “No problem.”
Dorothy: “MA!”
Sophia: “If this is true, I'm rooting for Sonny - you know, the paisan. Besides, there's something about this guy that just honks me off.”

Sophia [referring to George]: “He's alive, all right. I poked him with a stick.”

Back in St. Olaf
Rose: “Someone was actually able to deceive me once.”
Sophia: “Do tell, Rose.”
Rose: “St. Olaf's most famous OB/MAG.”
Dorothy: “What's that?”
Rose: “Obstetrician/magician. The Amazing Shapiro. He delivered Bridget. But it was so confusing. ‘It's a girl! Now it's a dove! Now it's a glass of milk!’ I don't know how he got her in that deck of cards, but there she was, right after the King of Hearts. ‘Is this your baby?’”

Best of B.E.D.
Blanche: “Since the funeral, I've been with other men. Many, many men. I always felt like I was cheating on ya.”
George: “Oh, Blanche, every day I was gone, I always wished you'd find somebody who could make you happy. How-how how many men?”
Blanche: “Two.”

Sweet, Single-Digit-IQ Rose
Blanche: “I feel like I'm goin' insane. My life's been turned upside down.”
Rose: “Just so we're in sync, it's this husband-back-from-the-grave thing, right?”
Blanche: “Yes, you twit!”

Blanche: “George is back. He wants to get together. I don't know what to do.”
Rose: “Oh, pick Lyle! Pick Lyle! Oh, that's Dorothy's problem, isn't it?”

Lesbian. Lesbian? LESBIAN??
George: “I know I could've stayed and faced the music, but it's just this damn Southern pride. It's the same Southern pride that kept me from being a dancer.”
Blanche: “George, please, I've had enough surprises for one day.”

Sophia: “I told you, I heard voices in here, and-- [seeing Blanche and Dorothy in bed] Oh God, it's Dorothy! I tell you, she takes one tennis lesson!”

From Feud to Food
Sophia: “Sonny! Sweetheart! My little cannoli!”
Sonny Bono: “Sophia! Honey! My Mama Celeste!”
Lyle Waggoner: “Of course you remember me, Lyle Waggoner.”
Sophia: “Nah, I don't think I do.”

Literary Intelligentsia
Dorothy: “Last week, I didn't have anything to do one night - shut up, Ma. So I went to the dinner theater and I saw Lyle and Sonny in a production of Equus. Uh. Our six eyes met, Sonny fell into the orchestra pit, Lyle forgot his lines and went into Under the Yum Yum Tree. Except for the reviews, it was a magical night.”

The Boob Tube
Dorothy: “Lyle!”
Lyle Waggoner: “I hope I'm not intruding.”
Dorothy: “Not at all. What are you doing here?”
Lyle Waggoner: “Well, it's just that we did so many restaurant sketches on THE CAROL BURNETT SHOW. I was, uh, waxing sentimental.”

Golden Quotes
Rose: “Blanche, look at all these flowers!”
Sophia: “Oh my God. Who died? Did one of us die??”

Blanche: “What in hell is going on?”
George: “Well, I guess the best thing to do is just give it to you plain and simple. Blanche, I staged my death.”
Sophia: [eavesdropping] “He stained his desk?!”

Sonny: “Excuse me. I've had some experience in marital discord myself.”
Blanche: “Sonny Bono, get off my lanai.”

Dorothy: “Oh now this is ridiculous. Look, I do not want two grown men fighting over me.”
Sophia: “Pussycat, how many chances are you gonna get?”
Dorothy: “Proceed.”

Dorothy: “Sonny, I think that Lyle is the sweetest, kindest man I have ever met. And what you have done here is a totally underhanded, inexcusable abuse of power. Oh, Sonny, THE POWER.”

Dorothy: “Oh, Blanche, just out of curiosity, were they in the dream?”
Blanche: “As crazy about you as ever.”
Dorothy: “Oh. I'm sorry I'm laughing, but the idea of me with one of those two is just so silly”
Blanche: “You picked Sonny this time--”
Dorothy: “YES!”

Critique:
Theory time! What exactly happened with Blanche during the “Greyhound terminal incident?” And what exactly goes on in the west wing of Shady Pines? But I digress. This episode is zany. It’s supposed to be zany. It’s all a freaking dream. The good ol’ sitcom reliable: “the dream episode.” Most sitcoms back in the 80s and 90s had them. At least The GG added a fun twist by not revealing that it was a dream until the end. Though, I’m not sure how the audience is supposed to buy into the fact that Sonny Bono and Lyle Waggoner are fighting over who gets to bone Dorothy but there you go. The episode really belongs to Blanche in what essentially amounts to “Let’s get Rue McClanahan another Emmy.” She does some terrific work here, but I always prefer slutty, funny Blanche, to melancholy, serious Blanche. The writing is as crisp as always, with some great lines, but not many outright classic ones. For what is basically a filler episode, it’s done surprisingly well. Anyways, so does George look familiar? It’s because the actor George Grizzard also played George’s brother Jamie in the Season 5 episode “That Old Feeling.” You can tell them apart because George has a mustache and Jamie does not. That is vital GG trivia right there. You heard it here first. GRADE: B+ 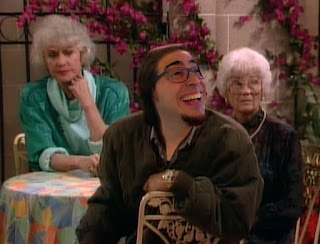