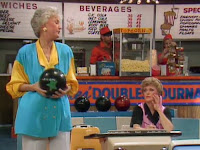 
Sophia: “I can't believe you're denying your own mother.”


We learn that Dorothy's age is 55 and Rose has six brothers. None of whom we ever meet or hear much about.


Blanche: “Don't you throw your bosom in my face!”


Sophia: “Mmm. If this sauce was a person, I'd get naked and make love to it.”


Sophia tells the girls that she was once engaged to a man named Augustine Bagatelli but he left to fight in the war and she never heard from him again. He was crazy about her because she was the only girl in the village who didn't want to be a nun.


Rose: “I need to win, Dorothy. And let's face it, you are no Sonja Nielsen!”


Dorothy [in arguably her deepest voice ever]: “Rose, get professional help.”


Rose: “Blanche, do you want to have a side bet with me?”


Blanche: “Well I would Rose but everything you own is so damned ugly.”


Blanche: “I haven't been dumped since Wade Honeycutt threw me over for Rebecca Wilkinson, a girl who did not value her reputation.”


Blanche: “Slept with his brother.”


Rose: “Sophia that smells heavenly! Is it Chef Boyardee?”


Sophia, clutching a knife: “Why don't you stick it in my heart Rose, it'll hurt less!”


Blanche: “What do you know Sophia has a past.”


Sophia: “That's right, but unlike yours I didn’t need penicillin to get through it.”


We learn that the overly competitive Rose had to transfer high schools because of a field hockey incident.


Dorothy: “You're not superstitious?”


Blanche: “No, it's adjacent to the men's locker room. When that door opens, you can see right in there!”


Blanche: “Well I am stunned. Just stunned. Stunned is the only way to describe how… stunned I am.”


Critique: This episode is a classic season one laugh-fest. The highlight being the first appearance of Rose's notoriously compulsive competitiveness. Betty White is a real standout here. Her facial expressions are priceless. The entire episode consists of the ladies teaming up and then dumping each other for whoever seems to be the better bowler. And then Rose and Sophia finding silly ways to psyche-out Blanche and Dorothy is a highlight. Funny that none of the characters ever bowl again (Then again Blanche says she only ever wanted to just look cute in her new bowling outfit). It's nice that Sophia gets her own subplot, the series' first for the character. The highlight of this highly memorable episode remains the ugly competitiveness that ensues between the ladies and how they're still able to remain such good friends in the end. One item of note is that Rose says that rival bowlers the Nielsen twins attended their lover Lars' authentic Viking funeral and every time they lit his ship on fire the coast guard kept putting it out. This is the first time we ever have any reference to the funny stuff of Scandinavian lore, which will eventually become a trademark of Rose's character. And for those paying close attention at this particular bowling alley a Turkey Delight sandwich costs $1.39. This is easily the best episode of the season so far. GRADE: A-
Posted by Chris at 7:04 AM