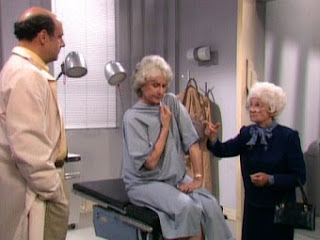 Synopsis: Dorothy struggles with an illness that doctors can’t quite seem to pin point; Sophia worries Dorothy may be dying. Meanwhile Blanche decides to become a great Southern writer.


Blanche: “Listen. Tell me I can't do better than this in my sleep. ‘He grabbed her. She could feel his fingers pressing into her moist flesh. Her heart was pounding, her loins on fire. As he spun her around, her dress ripping open.’ You know how many times I've experienced that?”


Rose: “Your loins have been on fire?”


Rose: “Where exactly are your loins?”


Blanche: “Rose, it doesn't matter. Just listen. ‘She melted into his arms, faint now with the animal musk of him-‘”


Rose: “I didn't know people had loins. I've heard of loin of pork.”


Rose: “You're getting sicker and sicker.”


Blanche: “Just like my heroine. Sicker and sicker. Though, of course, my heroine doesn't look like you. This is a romantic novel, not science fiction.”


Dorothy: “Remind me when I feel better to kick the crap out of her.”


Blanche: “I didn't say she looks fine. I said she was fine. She looks like hell.”


Rose: “Gustav Ljungqvist got sick from something mysterious, and he nearly died. Well, he did die, in fact. Then at the cemetery, Beatrice Ljungqvist - his wife - kept screaming, ‘He's alive, he's alive! I can hear him from the grave!’ Well, everybody thought it was the hallucinations of a grieving widow, so they sedated her. But when she woke up from her sedation, she told them that he said, from the grave, ‘We never paid our '78 through '86 income taxes.’ And his partner said, ‘Only Gustav would know that. He must be alive.’ So they all raced to the cemetery, and the entire town started digging like crazy - kneeling by the grave, using their hands even, dirt flying and Beatrice screaming - and when they opened that coffin, there he was, dead as a doornail.”


Blanche: “What is the point of that ridiculous story, Rose??”


Rose: “The point is Gustav didn't die from his mysterious disease at all. He lived and recovered. Trouble was he recovered while he was buried, so by the time they got to him, he'd died of suffocation… The other tragic aspect was the IRS was waiting at the cemetery to arrest Gustav's partner, Bergstrom. So Bergstrom killed himself right then and there, by grabbing the gun from Sheriff Tokvist and shooting himself. What they did then was, since the grave was still open, and everybody was right there, and Gustav and Bergstrom had been partners, so they put Bergstrom in with Gustav and had a double burial. Unfortunately, later they found out that Bergstrom wanted to be cremated.”


Dorothy: “I was in front of the class and I couldn't talk. I was too tired to talk. Not that they would have listened. They were too busy sniffing the Wite-Out they'd stolen from typing class.”


Sophia: “Well, let me tell you something, Mr. 100% Tiptop Mental. My daughter may be no spring chicken, and her jaw might crack when she chews. And she may have noticeable trouble digesting raw vegetables, but one thing she's not is mental.”


Rose: “We never had a barbecue in St. Olaf after the tragedy.”


Dorothy: “She'll work it in anyway. What tragedy, Rose?”


Rose: “But it had to do with barbecuing elk, a big fire and someone who lost his balance.”


Blanche: “It's just like giving birth, Rose. Once you get started, you can't stop!”


Blanche: “What was she writing?”


Rose: “She wasn't. She was giving birth to Hans and Franz, the twins. And she stopped right in the middle, right after Hans.”


Blanche: “Well, what happened to Franz?”


Blanche: “The fact is, I happen to be very good with sick people. I was once a candy stripper.”


Blanche: “Whatever. You know, volunteer.”


Blanche: “What a waste. Rose Nylund in New York.”


Rose: “It's gonna be a great trip. You wait and see. You're gonna be cured. And I'm gonna get to see the Big Potato!”


Dorothy: “I said she was comforting. I didn't say she was smart.”


Dr. Stevens: “Sorry to keep you waiting, Dorothy, but there was something I had to take care of.”


Dr. Stevens: “A famous person - very, very famous. But I can't tell you who it is, ethics, you know, we have to be quite careful about that. But if this was ‘Win, Lose or Draw,’ I'd draw a crown.”


Rose: “I've never seen so much of everything in my whole life. I went to Bloomingdale's, the store. I swear St. Olaf could fit into it. I went to the top of the Empire State Building. You know what I don't understand? How come the fall didn't kill King Kong instantly? I mean sure, he was big, but that's 102 stories. You look down… I know, it was a sad movie. I cried too. Every time I see it I hope, ‘Maybe this time it'll be different. Maybe this time he won't die.’ But he always does. It was only a movie, Dorothy. That was really a fake gorilla.”


Blanche: “I shall become a great Southern writer, carrying on the tradition of the other great Southern writers like, uh, all those others so famous they need not be mentioned. Oh, girls, it's gonna be so exciting. I am gonna make a fortune. And I won't even have to use my imagination. My life is a romance novel.”


Sophia: “Your life is a sports page.”


Blanche: “Well, now I know why Hemingway killed himself. Oh girls, I have writer's block. It is the worst feeling in the world.”

“Golden Girls” creator Susan Harris returned after a bit of a hiatus to write one last two part episode as a final GG hurrah. And what a hurrah it is. Everyone knows this as the episode where Dorothy has a mysterious illness, it gets diagnosed as Chronic Fatigue Syndrome (in which there is no cure) and yet it’s never mentioned again from here on out. Ah, the magic of 80s sitcoms. But let’s not get ahead of ourselves, this is just part 1. This is a great set up for what will be an even better second half. Blanche declares that’s she destined for great things by becoming a romance novelist. Little does she know that her sister Charmaine will do the same thing in a later episode. But I digress. The real fireworks of this B story is coming up in part 2. Here, Dorothy is suffering from a flu-like illness that makes her tired all the time. Even if the episode takes a more serious tone, there are plenty of hearty laughs to be found. We basically get three St. Olaf stories (Harris obviously wanted to out with a bang, like Blanche), an early appearance by George Bluth himself Jeffrey Tambor who brags that he’s treated one of the Saudis, and one of the series’ most golden lines: the bowel movement one of course. Bea Arthur takes center stage here in one of the more popular season openers and sets the stage for a fantastic fifth season.  GRADE: A-
Posted by Chris at 8:02 AM