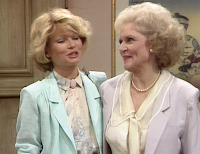 Rose's daughter Kirsten and granddaughter visit to go over Rose’s will; Blanche becomes obsessed with the local Duncan-Osgood murder trial.

That’s What She Said
Blanche, referring to the Duncan-Osgood murder: “His wife was found at the bottom of their private lake clutching his dickey in her hand.”

Lewd Ladies
Dorothy: “Blanche, you caught me one night sneaking out of the kitchen naked with an Oreo in my mouth. We have no secrets.”

Zbornak Zingers
Dorothy: “What are you and your daughter planning on doing this week?”
Rose: “My granddaughter's never been to Florida before, so I thought I'd take them to Sea World and Gatorworld and Reptile World. And Parrot Village.”
Dorothy: “What? The parrots don't get a world!? This is outrageous!”

Insult Watch
Rose: “We're in the middle of a makeup lesson.”
Sophia: “I hope the kid can help you. You wear more rouge than Miss Piggy!”

Tales from the Old South
Blanche tells a story about how when she was younger she convinced her sister Charmaine that she was left on their doorstep by gypsies. And never told her truth.

Product Placement
Rose: “Where's Charley?”
Dorothy: “On the lanai. My mother is trying to help her put Barbie's hair back on with Poligrip.”

Best of B.E.D.
Blanche: “You know, I don't believe George ever requested anything special from me. At least not in the kitchen. No, that's not entirely true. Once on our anniversary or was it on payday? Anyway, I remember a butcher block table was involved...”

Golden Quotes
Blanche, referring to her Rice Krispies log: “Thank you for these lovely gifts! What are you gonna do with yours?”
Dorothy: “It's a log. I'm going to burn it.”


Critique: This has never been one of my favorite episodes and it still isn't but I've appreciated it more as time has gone by. It's probably because when I was younger the entire story about the will was uninteresting (and still is rather boring). Speaking of which, does anyone find it odd that Charlie died what seems like at least a year or more prior and she's just going over the will with her daughter now?* I watched “Manchester by the Sea” and Casey Affleck's character reads his late brother's will the day after he dies. But I digress. And Kirsten is kind of a bitch, huh? At least this episode gave us the infamous Maple Syrup Honey Brown Sugar Molasses Rice Krispies Log! GRADE: B-

*For some reason I thought they were going over Charlie’s will in this boring episode. It’s Rose’s will. Still a crappy episode either way.
Posted by Chris at 3:42 PM