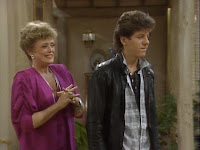 
Dorothy: “And when the bus gets to you-don't-know-where, - what will you do then?”


Dorothy: “Really? As what, Secretary of State?”


Blanche: “I want to propose a toast. To Dorothy Zbornak, who got an A in her French class, proving that you can teach an old dog new tricks.”


Sophia: “And if anyone knows about tricks...”


Rose: “Did they have chores in Sicily?


Sophia: “Are you kidding? They invented chores in Sicily. Crossing the street without getting pregnant was a chore in Sicily.”


Rose: “I just fixed a special treat for David. It's the same little after-school snack I used to make for my own son: a triple-decker BLT, a hearty helping of homemade potato salad, and a great big slice of double chocolate fudge cake.”


Dorothy: “Oh, where was he going after school? The electric chair?”


David: “Oh really? Was it on the Nina, the Pinta, or the Santa Mira?”


Dorothy: “Are you wearing something?”


Sophia: “A little Bengay on my knees. A little Vicks on my chest. A little Deep Heat on my neck.”


Dorothy: “What are you trying to do, pickle yourself so you'll live to be 100?”


Rose: "And after I finished all that, I still had to take care of Larry, my one-eyed pig.”


Dorothy: “What did you people do, run a farm for handicapped animals?”


Rose: “The movie with Sly Stallone.”


Sophia: “I sat through it twice, you'll love it. He sweats like a pig and he doesn't put a shirt on.”


Golden Quotes
“Well you wouldn't let me get the melon baller, so I improvised.”

Blanche: “Is that all you Italians know how to do is scream and hit?!”


Sophia: “No, we also know how to make love and sing opera!”


Critique: “On Golden Girls,” also known as the one where Sophia slaps Blanche's grandson and is obsessed with melon ballers, is a decent season one episode but far from a fan favorite. The writing isn't quite as crisp as in other episodes but it's noteworthy in other ways. This episode features the first time you see Dorothy and Sophia share a bed together which will become a staple throughout the series as the girls host many guests during the show's run. These scenes, like the “cheesecake scenes” feature some of the greatest chemistry between the actresses. Billy Jacoby is good here playing off the same trouble-making vibe he presented earlier that year in the 1985 teen classic “Just One of the Guys.” This episode is fine if not all that memorable. GRADE: B
Posted by Chris at 12:57 PM