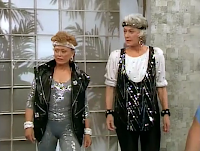 Synopsis: The girls prepare to get in shape before a friend’s upcoming beach party and reminisce about former diet and beauty regiments.


Rose: “Maybe I should've done my own hair. I've been doing it for years.”


Sophia: “That's why it looks like something you buy on a stick at halftime.”


Sophia: “Who wants to lick the spoon?”


Dorothy: “Come with me. Remember the first week you were here, we put a mark on the back wall to measure how tall we were? You said they did that at the home to show how your height was declining.”


Eduardo: “You are an earth mother. Sweet, compassionate, but bubbling with sensuality just below the surface.”


Rose: “Oh that's a relief. All this time I thought it was gas.”


Sophia: “It's too bad we're not back home. There's no place like Sicily.”


Sophia: “Because in Sicily I could solve this with one phone call.”


Sophia: “Nicodemo the Ugly. Whenever you wanted to look gorgeous at a party, you hired him to be your date.”


Blanche: “You mean women paid him to stand next to them at parties and look disgusting?”


Sophia: “Please. They paid through the nose. That's also how he usually gave them their change.”


Yvonne: “I know you'll love aerobics. It stretches every muscle in your body.”


Blanche: “Honey, I've been stretching this body for years.”


Dorothy: “Blanche, sticking your feet out of the sunroof of a Chrysler New Yorker doesn't count.”


Blanche: “Dorothy, do you realize it's only two weeks till Phyllis Strickler’s Memorial Day beach party? That means there's only two weeks till we have to get back into bathing suits again. Well, I just slipped into last year's bikini and I think I look pretty good, but you give me your honest advice. Can I still pull it off?”


Dorothy: “Right now I'd be surprised if you could cut it off.”


Dorothy & Blanche: “Shut up Rose!”
Dorothy Zbornak is My Spirit Animal
Dorothy: “Wait a minute. Wait a minute. Leg warmers??”
Yvonne: “Well, you need to keep your thighs warm. What are you using now?”
Dorothy: “Friction. That's why we're here.”


Yvonne: “When you told me you were serious, I took you literally. Just forget this stuff. Wear your sweats.”


Blanche: “Prove it. Put your money where your mouth is.”


Sophia: “If there isn't already a sweet roll there.”


Dorothy: “Come on now, Blanche, that was nothing but a pickup scene. People running around in skimpy outfits, collecting phone numbers.”


Blanche: “That's not true. I was not in a skimpy outfit and I got all these.”


Blanche: “Yvonne, honey, I think you're missing the whole point of having breasts.”


“Look, ladies, if you're serious about training, you want to get off on the right foot, starting with good workout shoes. Now, these are beautiful, and a bargain at $85.”


Dorothy: “Oh, that is so typical. All those swamis are just out for a buck. I mean they can't teach you anything that anyone with any common sense doesn't already know.”


Sophia: “I got weighed this morning. I couldn't believe what I saw. 98lbs.”


Dorothy: “What do you usually weigh?”


Blanche: “Oh, I'm feeling younger and sexier already. Dorothy, how do I look?”


Dorothy: “Like something that came out of the air duct of the starship Enterprise.”


Eduardo: “You are a vixen. For you, I see a saucier cut. An Audrey Hepburn look. Simple, elegant, and something to accent these delicate features.”


Dorothy: “Where'd you go to college, Blanche? The University of Jupiter?”


Eduardo: “All right, ladies. Whose hair do I wash next?”


Eduardo: “My dear, in many respects, styling hair is like making love. To do it well, one must have trust, respect and a chair you can pump up and down.”


Eduardo: “You could be a Greek goddess.”


Dorothy: “I've been talking about both of you. I mean, how could I chose between you two? You're both my best friends.”


Blanche: “Dorothy, how sweet. Oh, that just gives me a warm, tingly feeling all over. If you'll excuse me I, I'm gonna go slip under the covers and enjoy it.”


Whirly Birds!! Jackhammer!! Windshield Wipers!! Charley Horse!! Is it me or at this point in the series has the Amazing Kreskin been mentioned about four billion times? But I digress. I freaking love this episode. I could watch the absolutely hilarious and all-time fan favorite aerobics sequence with Yvonne a million times (I already have) and never get sick of it. The scene with Eduardo is great as well and features delightfully funny dialogue. The looks on their faces when they realize all Eduardo did was give them old lady hairdos is simply priceless. The third segment that deals with personality enhancement is sort of dull and somewhat foreshadows an entire future episode. The first two segments are so great it doesn't even matter if the third one is dull and boring, God did that to give the show some variety, according to Blanche. I like the episodes that feature these unseen vignettes because these standalone scenes work so well and feature sometimes hilarious bits of physical comedy. Rose not realizing Yvonne has a cramp is one of the many highlights of the naivete that is Rose Nylund. Now if you'll excuse me I've got to change into my PF Flyers. Note: I'm adding a new category called "What, We Can't Learn From History" to get all those classic quotes involving historical moments and figures. GRADE: A
Posted by Chris at 2:00 PM