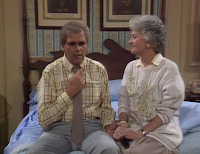 Synopsis: Dorothy shacks up with a married man, makes love in the daytime, and Blanche sells her car to Rose.

80s Flashback
Dorothy: “I'm not ready to go back to work yet.”
Rose: “Are you depressed about Glen?”
Dorothy: “No, I'm depressed because Phyllis George left the morning news.”

Shady Pines, Ma
Rose: “Oh, Blanche, you remember a few days ago when I said your car was making a funny kind of a noise sometimes? It's making it all the time now. And it started making a wheezing, coughing, rattling kind of a sound, every time it goes up a hill.”
Sophia: “Uh oh, that's a bad sign. Those are the sounds Tony Triano made the night they wheeled him out of the home on a gurney.”

Zbornak Zingers
Dorothy: “We spent the evening at a motel.”
Rose “A motel? Dorothy! A cheap, tawdry, bare-bulb den of iniquity?”
Dorothy: “We didn't drive to Sodom and Gomorrah, Rose.”

Tales from the Old South
Blanche: “My great granddaddy always used to say, there are two things you never sell to a friend: a car and a slave. 'Cause if either one of them quits working, you'll never hear the end of it. Course they hanged my great granddaddy. He said a lot of things he shouldn't have.”

Sassy Sophia
Rose: “Who was known as the world's fastest human being?”
Sophia: “Dominic Tansey.”
Rose: “It says Jesse Owens here.”
Sophia: “Trust me, it was Dominic Tansey. He got four women pregnant in one night.”

Back in St. Olaf
Rose tells the story about she and Charlie met as kids. Charlie had an insurance stand and Rose bought a nickel policy on her red wagon, which was later trampled by a stampede of hogs. Charlie bought her a new wagon even though her policy didn't cover acts of swine.

Best of B.E.D.
Blanche: “None of us is a schoolgirl anymore. Although, quite frankly, I am sometimes mistaken for one.”
Dorothy: “Oh, please, Blanche.”

Reel References
Glen: “It's amazing that I just made love in the daylight.”
Dorothy: “Why is that amazing? Can't hide anything in the daytime. At night, I could be Godzilla, you'd be thrilled.”


Critique: Let's be honest with ourselves. This episode is kind of a snooze right? Like I've said before there are no outright terrible episodes of this show, but some are less “popular” among the fans. No one would ever say this is one of their favorites. There's a little too much drama here which is fine, but it isn't very funny. The less said about it the better. You could tell the show was coming off a really great episode here (the midget one). Though, at least this is the one where Sophia sings Purple Rain. GRADE: C
Posted by Chris at 2:20 PM