Till Death Do We Volley S4E19 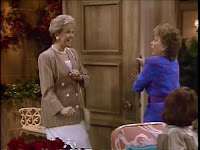 Synopsis: Dorothy's best frenemy from Brooklyn visits for their inexplicable Miami-set high school reunion but she pulls a Frieda Claxton during a tennis match.

Crazy Continuity
Dorothy's high school time-line is probably one of the most hotly debated of all the girls' pasts. Here she said she went to the prom in her tennis outfit (with her brother) but in a later episode she was supposed to go to the prom with John Noretti but ended up with Stanley because he didn't show up.

That’s What She Said
Trudy: “How does it feel to have your butt whipped??”
Blanche: “Well sometimes I find it strangely titillating...”

Take Me Out to the Ballgame, Stanley
Dorothy: “Trudy, how about if tomorrow we play a real game? Something that requires real skill.”
Rose: “You mean like midget ice bowling?”
Dorothy: “I'm talking about tennis, you doofus.”

Lewd Ladies
Blanche: “I'm afraid you'll have to excuse Sophia, Jack.”
Sophia: “Oh you heard that? I thought I was safe backed up against these pillows.”

Picture It
Sophia: “Picture it, Sicily, 1852.”
Dorothy: “Ma, I am in no mood. And besides, you weren't alive in 1852.”
Sophia: “What? We can't learn from history? It was mid-century and a disillusioned Italy looked to the house of Savoy for leadership. Giuseppe Garibaldi, our courageous leader, and not a bad dresser, thought, 'Let's regain some national pride and jump into this Crimean War thing.' Of course, there was a big kickoff party at Giuseppe's beach house, and everyone came. Coincidentally, this was also the night his wife Rosa hit her sexual peak.”
Dorothy: “Ma, I am in here because of guilt. This is not a story about guilt.”
Sophia: “This is a story about being a bad hostess. While Rosa had Giuseppe in the bedroom with his saber around his ankles, two hundred hungry guests were strip-searching mice for a piece of cheese.”
Dorothy: “Ma, so what's your point? That Rosa and I throw bad parties?”
Sophia: “That's my minor point. My major point is that, like Rosa, you're screwing around in the bedroom when there are important things to do outside.”

Zbornak Zingers
Trudy: “Boy, I envy you your gumption.”
Dorothy: “And I your breast implants.”

Insult Watch
Trudy: “It's been so long. Boy, you look- It's been so long.”
Dorothy: “I know, and you, you look exactly the way you did at our high-school graduation. Course, rumors were that you were three months pregnant.”

Trudy: “You're on, you pathetic middle-aged cow.”
Dorothy: “I am looking forward to it, you miserable sack of cellulite.”

Tales from the Old South
Blanche: “I remember I was a blossomin' belle who had just won the Little Miss Magnolia Pageant.”
Dorothy: “Blanche, before you start, realize I am very vulnerable now and in no mood to hear a story about you and some yahoo cracker with four first names pawing at each other under a magnolia tree.”
Dorothy: “Well, pardon me Dorothy, but we can't all come from places as socially acceptable as Brooklyn.”
Dorothy: “I'm sorry, Blanche. I'm sorry. Go on with the story. Just try to shy away from words like 'tarnation' and 'catfish.'”
Blanche: “Fine. Anyway, I was about eight years old when I first met Cathy Lee on the playground. We became fast friends, just as thick as Louisiana blackstrap molasses on a stake of johnnycakes as high as an elephant's knee-”
Dorothy: “On a riverboat floating down the Mississippi delta. Finish the damn story, Blanche!”
Blanche: “Anyway, it was at a Southern seafood fry that I proudly dragged Cathy Lee over to meet my folks. Well my mama took one look at Cathy Lee and forbade me ever to see her again.”
Dorothy: “Why?”
Blanche: “Because her mother was not in the Daughters of the Confederacy. Oh! How my heart went out to little Cathy Lee, standing there while our servants snickered at her servants. But Mama insisted I break off the friendship, or I wouldn't get brand-new riding boots for Christmas. So I did.”
Dorothy: “Blanche, why is this a story about acceptance?”
Blanche: “Oh, because years later, to get back at me, Cathy Lee slept with my daddy. That was something I had to accept.”

Product Placement
Rose: “Oh, I was the butt of all kinds of jokes growing up. Actually, it ran in the family. In our breakfast room, we had one whole wall covered with "kick me" signs we had collected. Oh, there was a story attached to each one of them. And in some cases, the original Scotch tape.”

Sassy Sophia
Dorothy: “Ma, how many times do I have to tell you not to listen in on my conversations?”
Sophia: “About twice a year. Like your phone is ringing off the hook. Like you got such a full social calendar. You're the only person who ever got a refund on call waiting.”

Back in St. Olaf
Rose: “You know, back in St. Olaf, I ran for president of the Bull Castration Club. There is no sound in this world sweeter than a bull's moo as it climbs an octave.”
Jack: “Did you win?”
Rose: “No. Lost by a hair.”

Best of B.E.D.
Trudy: “Come on! It was just a practical joke like we did in high school.”
Blanche: “Some of the things we did in high school are not necessarily appropriate when we're adults. Like staying up all night and carousing around, dating every other man you meet. I'm losing credibility here, aren't I?”

Sweet, Single-Digit-IQ Rose
Trudy: “Are we gonna play, or do you wanna forfeit?
Dorothy: “No way. No, Dorothy Zbornak doesn't know the meaning of the word 'forfeit.'”
Rose: “And she's a teacher too. No wonder the Japanese are ahead of us.”

Reel References
Trudy: “Mrs. Petrillo, is that you??”
Sophia: “No, it's Jane Fonda.”

The Boob Tube
Jack: “Were they like that in high school Mrs. Petrillo?”
Sophia: “Oh, no her breats were actually a lot smaller back then.”
Jack “I meant were they rivals.”
Sophia: “What is this 'Nova?' I don't have all the answers.”

Golden Quotes
Sophia: “In Sicily, women compete for everything. The most famous example is the Great String-Cheese War of '47. But why should I bore you with that? You all have college credits. You took history.”
Blanche: “Sophia, have you been out in the hot sun too long?”
Sophia: “It's a possibility. Is there wax running out of my ears?”

Sophia: “There are two things in this world a Sicilian knows. When pasta sticks to a wall, it's done. When a body sticks to cement, it's dead.” Dorothy: “We might as well take down that banner and put up one that says, 'Welcome to the Dorothy Killed Trudy Part!'”
Rose: “At the Center, Dorothy, we teach acceptance. In life, some things are inevitable, and you just have to accept them.”
Blanche: “She is right, Dorothy. I know because I've been there myself.”
Rose: “You killed your best friend, too, Blanche??”

Critique:
The exposition dialogue between Rose and Blanche as Trudy trips, falls, and has a “heart attack” on the tennis court is hilariously corny. “Trudy tripped!” “And she's not getting' up!” And there's a perfectly rational reason why we don't see Trudy hit the ground. Because there's no way in hell anyone in real life would ever buy someone “fake” having a heat attack and dying. This is the most preposterous situation to happen on this show since… since… oh since the last episode when they bought a Cuban boxer who pretended to only know Spanish because he really wanted to be a violinist. But I digress. I've always been quite fond of this episode, the same sort of fondness that Jean had for Rose. I love the bickering between Trudy and Dorothy, they were the original Blair and Serena. I've never been shy about discussing my love for the insults that fly around constantly at 6151 Richmond Street. And here they're turned up to eleven. There are so many bizarre things about this episode that make it memorable. Like why the hell is Dorothy's high school reunion not only in Miami (She's from Brooklyn in case you forgot) but in her own house? And the logic of Trudy faking her death is beyond ludicrous it could only happen in an 80s sitcom. And when and how exactly did Dorothy “cook up this topper” with Trudy's husband in the 10 seconds she left the party crying? Bravo Tracy Gamble and Richard Vaczy, bravo; this episode makes no real sense but it's delightfully hilarious. GRADE: A 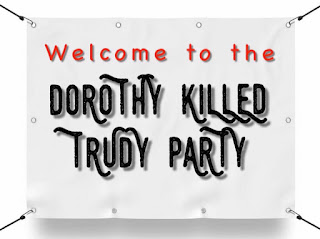