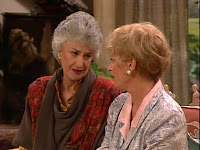 80s Flashback
Rose: “We saw 'Love Story' and 'Terms Of Endearment.' It was the Cry Me A River matinee at the Rialto.”

Let’s Get Political
Blanche: “A man has so much more to offer, you know what I mean Dorothy?”
Dorothy: “Yeah I found that out when Mark Perper was running for Class President in the third grade.”
Blanche: “Why, what does that have to do with anything?”
Dorothy: “Well, his campaign slogan was 'Vote for me and I'll show you my wee-wee.' He won by a landslide!”

That’s What She Said
Sophia, in bed with Dorothy: “Not tonight Salvador, I've been cookin' all day.”
Dorothy: “Ma, it's me, it's Dorothy.”
Sophia: “Oh Dorothy, the way your elbow was poking me I thought it was your father sneaking up on me.”
From Feud to Food
Rose: “Ice cream clown sundae?”
Dorothy: “Rose, Jean is gonna be with us for a week, let's not have all the really big fun right away.”

Lewd Ladies
Dorothy: “Ma, did Jean sleep with you last night?”
Sophia: “Dorohty, there are a lot of things I wanna try before I die, but that's not one of them.”

Zbornak Zingers
Rose: “How long were Jean and Pat married?”
Dorothy: “They were together eight years.”
Rose: “Poor thing. I wish there was something I could do… I know! I'll make my famous ice-cream clown sundaes. The ones with little raisin eyes and sugar-cone caps.”
Dorothy: “If that doesn't fill the void, nothing will.”

Tales from the Old South
Blanche: “I do love the rain so. It reminds me of my first kiss.”
Dorothy: “Aww your first kiss was in the rain.”
Blanche: “No, it was in the shower.”

Sassy Sophia
Blanche, to Jean: “Was that insensitive of me? Maybe you're not ready for men yet.”
Sophia: “You don't know the half of it.”

Back in St. Olaf
Rose tells the story of how her cow Molly became the most popular cow during mating season after being shocked by the milking machine.
Later, Rose talks about wanting to go to the prom with Delbert Twitchell the captain of the Precision Combine Drill Team.

Best of B.E.D.
Blanche: “Jean has the hots for Rose? I don' believe it, I do not believe it!”
Dorothy: “I was pretty surprised myself…”
Blanche: “Well, I'll bet. To think Jean would prefer Rose over me? That's ridiculous!!”

Golden Quotes
Sophia: “Jean is a nice person, she happens to like girls instead of guys. Some people like cats instead of dogs. Frankly, I'd rather live with a lesbian than a cat. Unless a lesbian sheds that I don't know.”


Critique: For some reason the actress who played Jean always reminded me of Charlie's mom in “Willy Wonka and the Chocolate Factory.” But I digress. “Isn't It Romantic?” may be THE best episode of Season Two. It's definitely one of my personal favorite episodes. There are too many great moments to mention but the standout is for certain the bedroom scene with Sophia and Dorothy, and Blanche who, not surprisingly, confuses the word “lesbian” with “Lebanese.” The moments when the girls are sharing a bed are always a highlight and arguably as good as the notorious “cheesecake scenes.” To think this was probably a “controversial” episode ("dirty movies" AND lesbianism!) at the time still amazes me though while the show always tackled “important issues” it always did it in a fun and entertaining way. To have Jean fall for Rose is a brilliant conception because of the jealous that is causes Blanche. This is truly one of Rue's best performances. As a side note, I did a content analysis of this episode for a communications class back in college and wrote a paper about it. I got an A. GRADE: A
Posted by Chris at 7:42 PM