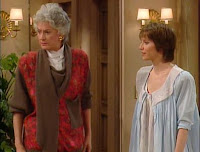 Synopsis: Dorothy's daughter Kate arrives with big news: her husband Dennis had an affair and she's left him; Blanche and Rose, on the forefront of binge watching, stay up for an “I Love Lucy” marathon; Sophia poops a lot.

Lewd Ladies
Blanche: “Sounds like to me Charlie was a little on the cheap side.”
Rose: “I'll say. Oh Charlie was a wonderful man, but he could squeeze a nickel till the buffalo pooped.”
Sophia: “Boy I'll tell you, there's something to the power of suggestion. Excuse me.”
Until the Buffalo Pooped...
Stan: "Wow! Isn't life a gas?"
Sophia: "This is amazing. Excuse me, again."

Picture ItF
Sophia: “Picture this: Brooklyn. July. 1949.”
Dorothy: “Ma, can't you put a sentence together, you sound like a sportscaster.”

Zbornak Zingers
Sophia: “Alright, what did you and Kate have a fight about?”
Dorothy: “About advertising condoms on television. About Dennis!”

Dorothy Zbornak is My Spirit Animal
Stan: “I can't believe it, I am going to be a grandfather. Think about it. Part of me is gonna be passed on to that child.”
Dorothy: “I'm sure we'll learn to love it anyway.”
Sweet Single-Digit-IQ Rose
Rose: “What about Lucy?”
Blanche: “We'll watch it on the portable in the kitchen.”
Rose: “But that set's black and white!”

Sassy Sophia
Dorothy: “You're saying I should stay out of this mess between Kate and Dennis?”
Sophia: “I said it, I used it in a story. What do you want me to do, embroider it on your underwear??”

The Boob Tube
Sophia: "Dorothy, please, let me go back to sleep. I was dreaming I was being held captive on a desert island by Cesar Romero in a loincloth."
Dorothy: "Ma, Kate and I had a fight. I have to talk to you."
Sophia: "You know that washcloth in my bathroom? That's how big Cesar's loincloth was. Good night."

Golden Quotes
Rose: “Dorothy, would you like to stay up all night and watch 'I Like Lucy?'”
Blanche: “'I LOVE Lucy.'”
Rose: “Well I haven't seen it yet, so I don't know how I'll feel about it.”

Critique: I always wondered if the show blew their budget on the sets for “Dorothy's Prized Pupil's” movie theater and “Diamond in the Rough's” "romantic diner" and the charity banquet because “Son-in-Law Dearest” is a borderline snoozefest that takes place over one evening and all in one location. The episodes where relatives show up are always a crap shoot. Sometimes they're hilarious (anytime Angela or Angelo show up) and sometimes they're dull (cue Rose's daughter and her Maple Syrup Honey Brown Sugar Molasses Rice Krispies log). Dorothy's daughter Kate is uninteresting and this story is obviously supposed to be a reflection of what happened with Dorothy and Stan but there is just something missing here. But let's focus on the good moments. I love a good Dorothy outburst (who doesn't?) and I'm pretty confident her “Stan take your damn hands off me!” is one of her best. Rose and Blanche's B-story about watching “I Love Lucy” is fine but so extremely trivial though it's worth it just for the Abbott & Costello-like scene where Rose bombards Blanche with questions: (“Why didn't Desi play Desi?” “He wasn't tall enough!”). We also get to learn that Rose and her husband Charlie had sex for like 7 hours a day. No wonder he had a heart attack. And lastly, I love a good poop joke and the fact that Sophia keeps running to the bathroom every time poop or gas is mentioned is a testament to why Sophia is such a fantastic character. GRADE: B-
Posted by Chris at 2:03 PM