Rose: Portrait of a Woman S7E22 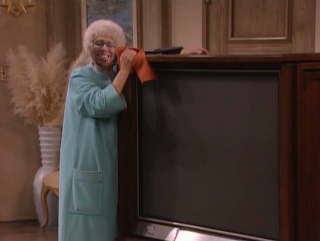 Synopsis: Blanche makes Rose pose for a sexy photograph for Miles’ birthday gift; meanwhile Dorothy speaks at Career Day and gets a new job from a former student.

Rose: “Do you really think that's right for Miles? He's never seen that side of me before.”

Blanche: “You mean, the wanton Rose? The harlot? The elemental woman who cries out for the fiery, passionate response of an elemental man? Is that the side you mean?”

Rose: “Actually, I meant my heinie. Miles and I always make love with the lights off.”

Rose: “Always. Well, except for the time we were listening to this concert on radio. And when the applause started, his Clapper went crazy. The lights went on, off, on, off, on, off. And Miles did his impression of the old King Kong, and we laughed and laughed. So I pretended I was Godzilla, and we wrestled, got all sweaty. Come to think of it, we never did make love that night.”

Blanche: “If you didn't make love, what did you do?”

Sophia: “It's my new big screen TV, thanks to you and the generous raise in my allowance. Isn't she a beauty? Only 1,300 easy payments.”

Sophia: “The salesman tried to jerk me around on the price, but once he found out I was Jessica Tandy, I got a deal.”

Dorothy: “Ma, I wouldn't get too attached to this.”

Sophia: “Are you talking about those ridiculous pictures Blanche puts on her Christmas cards?”

Blanche: “Those cards are a moving tribute to the spirit of the season.”

Dorothy: “A moving tribute? The three wise men and you in a teddy following the Christmas star?”

Blanche: “I've always wanted to sit for a portrait. An artist could use his palette to bring out my distinctive personality, my Southern fieriness. He could showcase my inner beauty.

Sophia: “Plus, he could cheat and paint your head to scale.”

Randy: “I just have to see what Joe has to say about all of this.”

Dorothy: “And I'm sorry, honey, but you're gonna have to send back the TV.”

Rose: “Not if I could pay for it myself.”

Dorothy: “Oh? How do you propose to do that?”

Rose: “I have the negatives from Rose's photo shoot. It doesn't say much for this great land of ours, but there's a market out there.”

Rose: “Oh, speaking at Career Day is quite a responsibility. I still remember Career Day back in St. Olaf.”

Rose: “Gunther Hanchap, St. Olaf's leading shepherd and notary, came to speak. It was so moving when he talked about his solitary existence with the sheep. No human contact for months at a time. Just building a special relationship with God's simple creatures. I really wanted to help.

Blanche: “So you decided to become a shepherd?”

Rose: “No. I decided to give Gunther a case of Scotch. And he really appreciated it, until he discovered what mean drunks sheep are. They're kinda like cows when they're drunk. You know what I mean?”

Blanche: “Rose, honey, you've got to use some imagination. Now, I know what men like for their birthdays. They like a surprise that makes their libidos stand up and say, ‘Hello, there!’”

Blanche: “I will never forget Career Day at my high school. It was a turning point in my life. That was the day I decided I was gonna marry a man who had one.”

Randy: “Hey, '75 was a big year for me. My grades were in the toilet. I was ready to bail. Till they brought in ‘Atilla The Sub.’”

From Feud to Food

Sophia: “Oh, wait a minute, pussycat, I almost forgot. I packed your lunch.”

Sophia: “I wanted to. Besides, it's the exact same lunch I packed you on your first day of school. Salami and a thermos of wine. Remember, Dorothy, when you go to work today, be proud. You're a Petrillo, which in Italian means, ‘Hey, I'm on a break here.’”

Rose: “Dorothy, how would you feel about a birthday present of a picture of me in sexy lingerie?”

Dorothy: “I'd rather have the cash.”

Dorothy: “I do have an idea for a new video game.”

Dorothy: “No, I've thought it all out. And then when you arrive at level four, then you get to just nuke her. I mean, just nuke the hell out of her!”

Miles: “Sweetheart, that was a wonderful dinner. It was a birthday I shall never forget.”

Rose: “Well, this one isn't over yet. It's time for your present.”

Miles: “Back when I was in the army, inside my locker I kept a picture of Betty Grable. And she was wearing a lot less than you were wearing in my birthday photo. Sweetheart, she was the darling of America.”

Rose: “Miles, she was in her 20s, and she had the most beautiful legs on the planet.”

Miles: “Uh! The second most beautiful.”

Miles: “Rita Hayworth had a set of gams on her, boy!”

Blanche: “You can give Miles one of those boudoir photographs. You know, where you pose for pictures in sexy lingerie?”

Blanche: “Oh Rose, come on, it's a great idea. The pictures are just an intimate way to let a fellow know he's the one and only man in your life. I've done it 20, 30 times.”

Student: “Mrs. Zbornak, what does Joe have to say about all this?”

Dorothy: “And so, are there any questions?”

Sophia: “Yeah. What does ‘Joe’ have to say about all this?”

Blanche: “You look wonderful, Dorothy, but don't you think those shoulder pads make you seem a little aggressive?

Rose: “This is what I'm wearing for the photographer. It's the nightgown that makes Miles, you know, hot.”

Sophia: “Maybe it's the, you know, flannel.”

Dorothy: “We're never gonna beat you people, are we?”

Mr. Tanaka: “That was very inspirational, Mrs. Zbornak. And now, if you'll excuse me, I must catch up with Tojo.”

Blanche: “Now, what was supposed to have been a private, intimate moment between you and your boyfriend turned into a sordid exhibition in front of strange men.”

Rose: “And what's the positive?”

Blanche: “I slept with the photographer.”

Critique: “Rose: Portrait of a Woman,” ooo catchy title! It’s so bizarre to me that THIS is the penultimate penultimate episode of The Golden Girls. Arguably a fairly grounded season seven episode, Rose finds herself embarrassed by her sexy boudoir photograph when Miles opens it in front of all his college professor colleagues. Now, I don’t really have much of a desire to see Betty White in sexy lingerie or nursie but there is a part of me that HANDS DOWN wants to see this photo of Rose. But still, like Dorothy, ultimately I’d rather have the cash. It’s also funny that this is the last time we’ll see Miles in this series, as he doesn’t seem to care that Rose has a heart attack in the next episode and he apparently is too busy to show up at Dorothy’s wedding in the finale. But I digress. Let’s jump over to Dorothy’s B-story in which she gets a job teaching goof-off grown men at Borealis. This storyline is fine and it works for Dorothy but the real highlights here are the running “joe mama” joke and Sophia’s gigantic TV Tanya (only 1300 easy payments). While the episode offers a few memorable lines, it all feels like filler until two of the biggest (literally cause they’re two-parters) and final episodes of the series. Also, if Randy looks familiar he was also one of the guys in the Vacation episode who proclaims "there just aren't enough johns!"  GRADE: B-