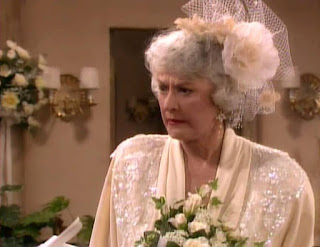 That’s What She Said
Sophia: “Dorothy, I guess we're sleeping together tonight.”

Animal Alert
Rose: “Oh, Dorothy, push the doorbell. “
Dorothy: “The door's open.”
Rose: “I know, but push it anyway.”
[sounds of dogs barking]
Dorothy: “This is really amazing, Rose. You know, just the other day I was thinking, Why doesn't our doorbell bark?”

Shady Pines, Ma
Rose: “I don't want your husband. I never did.”
Myra: “I understand that now. I think I was just afraid of starting all over at my age. My daughter's checking me into a lovely retirement home called Shady Pines.”
Sophia: “That's great. Come out to the lanai, I'll give you the lowdown on Shady Pines. You know, who does what for cigarettes.”

Lewd Ladies
Sophia: “You know, Pussycat, we never had that mother/daughter talk about sex.”
Dorothy: “Ma, I've had sex more years than I care to think about.”
Sophia: “I know. I think you're doing it wrong.”

Brooklyn: A Fairy Land
Dorothy: “Oh when Stan and I were married, Stan was crying, I was crying, Ma was crying. All for different reasons, but if you didn't know us, it looked touching.”

Insult Watch
Sophia: “Dorothy, he's perfect for you. He knows your shoe size and he doesn't care.”

Product Placement
Sophia: “I'm not living with you and Stan.”
Dorothy: “Yes, you are, Ma. I want you with us, and besides, you can't afford to live alone.”
Sophia: “Blanche is letting me keep my room, and I have an interview at McDonald's today. If I can see over the counter, I'm their new fry girl.”

Sassy Sophia
Sophia: “Stop! As God as my witness and in front of this entire congregation, I call an end to this wedding here and now!”
Blanche: “Sophia, this is only the rehearsal.”
Sophia: “It is? Pretend you didn't hear that. I'll see you tomorrow.”

Back in St. Olaf
Blanche: “Rose, what happened?”
Rose: “My brakes went out, and the car wouldn't stop. My whole life flashed before my eyes and the Nuderflaken twins played a bigger part than I had realized.”
Blanche: “That must've been awful.”
Rose: “Oh it was. I don't know any Nuderflaken twins.”

Truby: “Ah, great day for a wedding. Say, who tied those dead fish to the back of the car?”
Rose: “It's a St. Olaf tradition. You drive until you can't stand the smell and then that's where you live.”
Truby: “Crazy or stupid?”
Blanche: “We think it's a mix.”

Rose: “Let me tell you about a lesson that I learned when I was a little girl in St. Olaf. If you hold a bird gently, the bird will stay. But if you squeeze the bird, his eyes will bug out and Mr. Pet Shop Owner gets very huffy and he won't let you touch the birds anymore. And the mice? He won't even let—”
Blanche: “Rose!! What is eight times six? OK, now that we have a few minutes… I think Rose made two very good points. One: Not all psychotics are dangerous. And two: Honey, you have to let go. Dorothy's capable of making her own decisions. Does any of this make any sense to you, Sophia?”
Sophia: “Not completely. I still think Rose has the capacity to kill.”
Blanche: “Oh, Rose. Sorry, honey. Pencils down.”
Rose: “I could've used a pencil!?”

Rose: “My wedding was outdoors. February 12th. I'll never forget it. I wore the most beautiful white flannel wedding gown. It even had feet sewn in.”

Best of B.E.D.
Blanche: “You know, this reminds me of the day I married George. Oh, it was an exquisite wedding.
Five hundred people in that big, old church and I didn't have any underwear on.”
Dorothy: “Why?”
Blanche: “I just felt it was the right thing to do.”

Sweet, Single-Digit-IQ Rose
Blanche: “Rose, you’ve got to disconnect those stupid dogs.”
Rose: “But it’s working. And besides, I’ve already named them.”

From Feud to Food
Sophia: “Alright. You've got a second chance. But if you hurt my daughter again, I'll make you miserable for the rest of my life. And if I lay off meat and dairy, that could be as much as five years.”

Dorothy Zbornak is My Spirit Animal
Dorothy: “God, this has always been my worst nightmare.”
Truby: “A wedding falling apart at the last minute?”
Dorothy: “No, going on a honeymoon with my mother.”

Golden Quotes
Blanche: “It's late. Why didn't somebody wake me up?”
Sophia: “Because the last time I walked into your bedroom unannounced, some guy missed the trampoline and almost killed me.”

Rose: “I'm afraid to open it. What if it's from Myra?”
Dorothy: “Oh, come on, Rose.”
Rose: “Well what if it's got a deadly black spider in it that's gonna leap out and bite me the minute I open it?”
[Dorothy stomps over letter]
Dorothy: “There you are.”
Rose: “You're wise. Ya just wise.”

Dorothy: “You've already turned down about 12 people. They're either too thin or too pretty or too young. It's as though you only wanna live with a woman who has absolutely no sex appeal whatsoever.”
Rose: “You think we're dogs, don't you?”
[barking doorbell rings]
Blanche: “Now that's too eerie.”
Sophia: “The dogs are on my tail again! Through the river! Run through the river!”
Dorothy: “Oh Ma! Ma! Ma! Ma, we've just put in a new bell. It's to scare people.”
Sophia: “It'll never work.”

Truby: “I always get nervous at weddings. Weddings and funerals. I've been to so many of both that I get mixed-up. Same guest list, same flowers, handful of rice, handful of dirt. The only difference is, after the funeral it's OK to date.”
Blanche: “I'm beginning to like her.”

Rose: “If it's any consolation, Dorothy, I think what there was of your wedding was very beautiful. And the album won't be as bad as you think. I mean the photographer got some great shots of your friends leaving with their gifts.”

Blanche: “Truby, honey, we have to talk. I know you signed a lease, but, well, considering Dorothy's tragic misfortune.”
Truby: “I know, I know, but could I just stay a couple of days? I can't stand another minute at a hotel.”
Blanche: “I know what you mean. If I have to come up with one more fake name.”

Dorothy: “Ma, I have a better idea. In my suitcase there are two tickets to Aruba. I think Stan owes us a little vacation, don't you?”
Sophia: “Aruba?! I love Aruba! Where's Aruba?”

Critique:
Surprise! Like anyone thought Dorothy would actually end up married to Stan. He’s a yutz. Ok let’s move on to some burning questions. I wonder how long Rose and Charlie drove before they couldn’t stand the stench? I mean in past episodes (like when they play Googenspritzer) Rose says there’s only one street in St. Olaf. I assume the stench was REALLY horrible. Moving on. Did Sophia ever end up getting the job at McDonald’s? I mean she does have relevant work experience from her days at Pecos Pete’s Chow Wagon. And speaking of which…. Does Myra look familiar? She’s also Edna in “Blanche’s Little Girl”…. And Candi  in “Nothing to Fear But Fear Itself” and another upcoming episode.  They must of really liked Meg Wyllie’s spunk. She was the rare guest star to show up four times. Anywho, I just have to stress how much I love this two parter. There are so many great, classic lines (including the well-known “Chuck says Yo” exchange). Debbie Reynolds makes a memorable appearance as Dorothy’s replacement. They should of just gotten her for the 8th season of The GG. Anyone got a DeLorean lying around?  GRADE: A 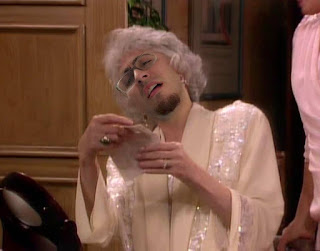