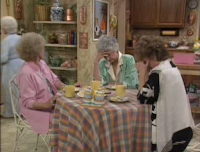 Synopsis: Sophia announces that she’s moving in with her son Phil, so they reminisce about previous memories.

That’s What She Said
Dorothy: “Oh Rose, have you been feeding those strays again?”
Rose: “I can’t help it Dorothy, I heard them howling and moaning all night. How do you ignore something like that?”
Dorothy: “I’m getting used to it, you know my room’s next to Blanche’s.”

Shady Pines, Ma
Sophia recognizes the smell of Seafood Medley cat food because she says they fed it to them every Sunday night at the home

Critique: Ugh, the dreaded clip show. And it’s not one that features new footage. To make matters worse, the episode is a two-parter so it lasts for nearly an hour! At least most of the moments are worth remembering (such as the time they were all in bed when the heat went out). As funny as many of these memories are, it’s just lazy, lazy writing (as lazy as writing lazy twice). They could have at least had some new memorable lines, which there aren’t many. They even seem embarrassed in that photo up there. C
Posted by Chris at 11:38 AM