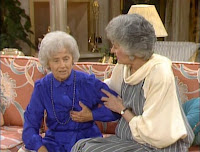 Synopsis: After hosting a dinner party, Sophia shows signs of having a heart attack.

Crazy Continuity
Rose says she named her cat Lindsrom (which is also her maiden name) and we later see her with a cat named Mr. Peepers, but in the High Anxiety episode Dorothy tells Rose she's never had cats since she's allergic to them. Hmm….
Blanche mentions that living in Minnesota is like being cryogenically frozen… perhaps this is when Rose researched having her head frozen?

Let’s Get Political
Blanche: “Boy, what a night.”
Dorothy: “You said it. It sure makes you think.”
Rose: “About what?”
Dorothy: “About our policy in Guatemala.”

Zbornak Zingers
Rose: The only doctor I ever liked was Dr. Clyde, our vet. He was wonderful. My mother wanted him to do her hysterectomy, but he wouldn't.”
Dorothy: “But he was willing to do her lobotomy.”

Insult Watch
Rose: “I know what a bubble is. I've had a bubble.”
Sophia: “In your head!”

Product Placement
Sophia: “I went to heaven. I saw the golden light. And some angels in white robes with harps; I thought I was at Saks at Christmas.”

Sassy Sophia
Rose: “Is there anything else we can get you Sophia,  a little tea perhaps?”
Sophia: “I'm not in England, I'm having a heart attack.”

Back in St. Olaf
Rose: “So there I was with no vet, and Petunia was about to give birth to her piglets. Well, I just didn't know what to do. I mean, I had helped deliver Bessie the cow, but Petunia was so much more difficult...”
Sophia: “If I died, would you stop telling the story?”

Best of B.E.D.
Blanche: “Italian men are just the sexiest, most romantic, most gorgeous men in the world. Of course they worshiped me because I'm blonde and feminine and young, with a great body.”
Dorothy: “What mirror do you use?”

Golden Quotes
Sophia: “You're Jewish? How come so many doctors are Jewish?”
Dr. Harris: “Because their mothers are.”
Blanche: “You know, all it takes is one little dessert and my panties cut off my circulation.”

Critique: This is a really great episode. There is so much good character development here, and we get to learn so much more about the girls, especially Rose. Sophia makes reference to Rose being Scandinavian and we keep getting closer to Rose talking specifically about St. Olaf: she mentions her “Lindström Pie” that tricks people into thinking it's a regular apple pie: “But when you bite into it, it's herring!” This episode is also notable as it's the first time Rose mentions to Dorothy about how Charlie died (she had previously mentioned it to Arnie in “Rose the Prude”). For an episode that takes place over the course of a couple hours, it moves swiftly along and is extremely dialogue driven with lots of memorable lines. GRADE: B+
Posted by Chris at 1:02 PM