How Do You Solve a Problem Like Sophia? S6E8 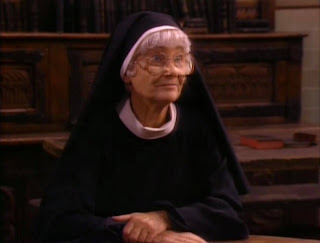 Synopsis: After Sophia’s nun friend dies, she decides to join a convent. Meanwhile, Rose gets sued after Blanche gets into an accident with Rose’s car.

80s Flashback
Sophia [looking at an ink blot]: “I see the Blessed Mother smiling sweetly as she pours love upon the hearts of the righteous standing at the gates of heaven, while St. Peter--”
Dorothy: “Ma! Come on, you're making that up.”
Sophia: “I am not.”
Dorothy: “Look, anyone can clearly see that is a picture of John Forsythe lying naked in a pool of honey... Isn't it?”
Sophia: “Do you think I would lie to get into the convent?”
Sister Claire [tugging at her habit]: “It does look a little like John Forsythe, doesn't it?”

That’s What She Said
Sophia: “Do you think I could leave you that easily?”
Dorothy: “A minute ago you were gonna spit on me.”

Take Me Out to the Ballgame, Stanley
Blanche: “Just look at you. Must be so frustratin' for an athlete like you. Did you ever play any college ball?”
Arthur: “No. As a boy, I got as far as the Pee-Wee leagues, but then I discovered stamps. Wow!”

Shady Pines, Ma
Dorothy: “Sister, is it all right if I sit in? I don't think my mother would mind.”
Sophia: “Think again.”
Dorothy: “I'd go outside, but there don't seem to be any SHADY PINES to sit under.”
Sophia: “Pillow, Pussycat?”

Lewd Ladies
Blanche: “All we'd need is a devastatingly beautiful woman with a flair for seduction.”
Rose: “How about Mrs. Hufstad down the street? I mean, she's something of a dog, but she'll do it with anybody.”
Blanche: “I was talkin' about me.”
Rose: “Oh yeah. You will too.”

Zbornak Zingers
Blanche: “Hi, Dorothy. How was the funeral?”
Dorothy: “It was a humdinger, Blanche. We closed the place.”

Sassy Sophia
Sophia: “God reminded me today that I've always had a dream, a very private dream, one I never talked about. When I was growing up, I wanted to join the convent. Well, until I was 17.”
Rose: “What happened then?”
Sophia: “Your father put his hand in my blouse.”
Blanche: “So?”
Sophia: “So I felt soiled, filthy, dirty. You know, in love.”

Sophia: “Pussycat, what are you doin' here?”
Dorothy: “Oh, I just missed you and wanted to say hi and see how you're doin'.”
Sophia: “I'm doin' fine. Ten days celibate!”

Best of B.E.D.
Blanche: “Well, you know how I like to meet rich men by gently rear-ending expensive cars at red lights?”
Rose: “Yeah.”
Blanche: “Well, you say that like it isn't great. Rose, it's the perfect plan. You get to meet the guy, exchange addresses, and then when he asks you who does good body work, you give him your phone number.”

Sweet, Single-Digit-IQ Rose
Rose: “Well, you're not gonna believe this. I've just been talking on the phone for a half-hour, and guess what.”
Blanche: “You forgot to dial first?”
Rose: “No.”
Dorothy: “You held the receiver upside down?”
Rose: “Nuh-uh.”
Dorothy: “It wasn't even the phone, it was the TV remote control.”
Rose: “No.”
Blanche: “A shoe?”
Rose: “Blanche, please. I'm not an idiot. The TV has a remote control??”

Until the Buffalo Pooped…
Sophia: “God spoke to me today at the funeral. He told me to join the order.”
Blanche: “God spoke to you? You haven't been eating chili dogs again, have you?”
Sophia: “That was an honest mistake. And to clarify, that's when I thought God was whistling to me.”

From Feud to Food
Rose: “We came to see you.”
Sophia: “Nice to see you. What a lovely surprise. Welcome to our little convent. Not even a Bundt cake, huh?”

Dorothy Zbornak is My Spirit Animal
Dorothy: “You'll have to excuse my mother. She suffered a slight stroke a few years ago which rendered her totally annoying.”

Reel References
Sophia: “God, I'm so confused. I don't know where I belong. I'm trying to wrestle with the deep religious questions of the ages. Like, what do you really want from me? What is my real purpose in life? What was Edward G. Robinson doing in ‘The Ten Commandments?’”

Golden Quotes
Blanche: “I can't believe anybody would wanna be a nun. I mean, ‘nun.’ The word says it.”

Blanche: “There's nothin' wrong with that man's back.”
Rose: “How can you tell?”
Blanche: “Because I know the crooked walk of man when his back has been injured. I cannot tell you how many men I have seen limp out of my bedroom.”

Dorothy: “Ma, you actually went to a convent? Why didn't I know that?”
Sophia: “Because you're divorced. Technically, in the eyes of the church you don't even exist. I spit on you. Unless, of course, the sister would like to spit on you first.”

Sister Claire: “We have very strict guidelines when selecting postulants, so we're going to put Sophia through a battery of psychological tests. It helps weed out the crazies and undesirables.
Dorothy: “Sorry, Ma.”

Blanche: “Rose, I won't go all the way. I'll just get him in the bedroom and, uh, put him through the normal warm-ups. And we'll have a certain Scandinavian nitwit hidin' in the closet with a camera.”
Rose: “Wouldn't it be better if I hid in the closet??”
Blanche: “Yes, Rose, I suppose it would.”
Rose: “But do you really think you can get him to remove the neck brace?”
Blanche: “Oh, please. I once got a man to crawl out of a full body cast!”

Sophia: “Rose, just remember, you're smarter than people say you are. You've got common sense and you know what you're doing.”
Rose: “Oh, Sophia.”
Sophia: “Blanche, you're a slut.”
Blanche: “Oh, Sophia.”

Dorothy: “Look, I got a card from Ma.”
Rose: “Oh, Dorothy, read it out loud.”
Dorothy: “‘Dear Pussycat, I have everything I need, but it's hard to get a decent bikini wax. Dorothy, I remember you fondly, and the same goes for Blanche and Rita. Wish you were here. No one can reach the third shelf in the pantry. Best, Sister Ma.”

Blanche: “You know what I'm gonna miss most about Sophia? The way she used to tease me. The way she would ever-so-subtly jab me with names like ‘tramp," ‘floozy,’ ‘trollop,’ ‘harlot,’ ‘magic carpet ride.’”
Rose: “’The human luge.’”
Dorothy: “But she was never cuter than when she simply called you ‘shore leave.’”
Blanche: “Oh God, I miss that woman.”

Sophia: “Clear out. It's the man… Hello, Reverend Mother. My, you look holier-than-thou today.”
Mother Superior: “Save it, Sister Suck Up.”

Dorothy: “Ma, where are Blanche and Rose?”
Sophia: “Oh, they wanted to browse in the gift shop. They're having a sale on John the Baptist place mats.”

Critique:
Okay, so I know that Rose isn’t the brightest color in the crayon box but she seriously doesn’t know what a TV remote control is? I can’t even buy that she’s really that stupid. The writers really dumbed her down by this point; she was borderline mentally challenged. Not that there’s anything wrong with that, I mean it is still funny after all. But I digress. Who doesn’t love this nuntastic episode? I’d like to think this was the inspiration for “Sister Act” which was released just two years later. So, I’ve lost track of how many times nuns and priests have appeared on this show. In fact, the only character who was never seen in a nun’s outfit on show was Dorothy. Anyways, let’s be honest, Rose and Blanche’s storyline is basically a snooze until thy the final moment of the episode when they rush outta the bedroom with Blanche dressed as a nurse and the guy who’s suing Rose chasing her in his boxer shorts. The writers were constantly writing B stories that resulted in quick but funny moments like this. But let’s get to the real meat of the episode: Sophia, as a nun. There are so many great gags here. The ink blot scene is hilarious and nuns playing poker with Sophia is hilarious. However, the real burning question is how the hell did Sophia sneak in that poster of the sweaty hunk with a reverse image of the pope into her convent bedroom? That is the truly deep religious question of the ages. GRADE: A- 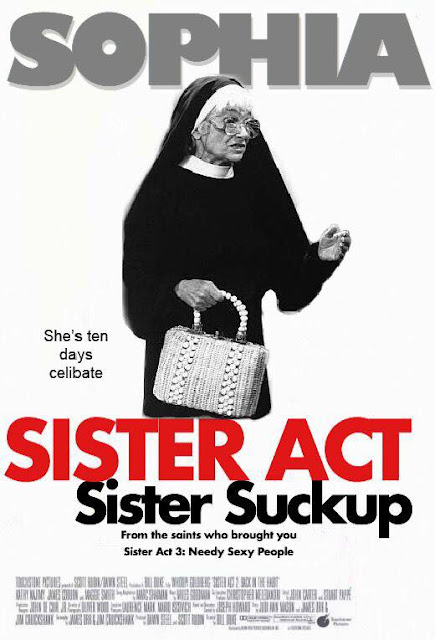