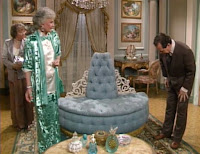 Synopsis: Rose puts in an ad in the personals column, and feeling sorry for her, Blanche responds which leads Rose into wanting to meet a man that doesn't exist.

80s Flashback
Rose: “I got a response from my personal ad. And it's just the sweetest letter. He apologizes for waiting so long to respond. He says he's shy about meeting someone through the personals. Oh he and I have so much in common. We both love all dairy foods, and we both requested to stand next to Bert Parks in Hands Across America.”

Let’s Get Political
Rose: “It was during the Korean conflict. I was rejected as a WAC. I failed the ink-blot test.”
Dorothy: “Oh come on Rose, now how can you fail an ink-blot test?”
Rose: “I didn't know you weren't supposed to cut them out.”

That’s What She Said
Blanche: “Dorothy, the man had just recovered from a hernia operation, and he was having trouble carrying his sack.”

Lewd Ladies
Blanche: “Honey, have you given any thought to advertising?
Rose: “Oh Blanche. I could never dress the way you do. Besides, I have to wear undies. Not all my wool skirts are lined.”

Insult Watch
Dorothy: “So, just tell Jackie that you'd prefer Marla to do your hair.”
Blanche: “I can't. Jackie and I go way back together, before bouffant. So, what if I switch to Marla, and you take my appointment with Jackie?”
Dorothy: “But you just told me that Jackie makes you look like a chicken.”
Blanche: “I know but with your nose, you could pull it off.”

Tales from the Old South
Blanche: “The only woman that I know who went without male companionship longer than you was Heather Swain, who went to the sanatorium for what Reverend Samuels insisted was the croup, but which all Mayflower County knew was a 'social disease.'”
Dorothy: “Congratulations, Rose, a new record. And you've done it without needing penicillin.”

Product Placement
Sophia: “Dorothy, I got a big problem.”
Dorothy: “The Metamucil's in the top cabinet.”

Best of B.E.D.
Blanche: “OK, let's get back to our dates. I want Howard to get me tipsy and take advantage of me.”
Dorothy: “Blanche, Howard's my date.”
Blanche: “Oops!”

Reel References
Rose: “I haven't been this depressed since I was rejected by Uncle Sam.”
Blanche: “Well honey, if he was your uncle, it wasn't meant to be. It's not like he was your cousin. Where the relationship might have had a future.”
Dorothy: “Tell me, Blanche. Did any of your relatives appear in 'Deliverance?'”

Golden Quotes
Blanche: “Oh my God, Dorothy. What if he turns out to be some kind of depraved ex-convict who's kidnapped Rose, and is dragging her across seven states on a rampage of violence and destruction unparalleled in the annals of modern crime?”
Dorothy: “Then we probably should have told her about the letters.”
Isaac Newton: “I wondered where they moved the party to.”
Dorothy: “Isaac, this is the ladies' room! This is where ladies go to the bathroom.”
Isaac, looking at a sofa: “Wow, how do you lift this baby up? I guess you have to stand back when you flush this thing.”


Critique: Maybe Rose would have gotten more responses to her personal ad if she had put “Willing to do anything for $8 an hour.” Anyways, how utterly 80s is this episode? Newspaper personal ads? If this show were on today do you think Dorothy and Blanche would have suggested that Rose start a Tinder profile? But I digress. “Love, Rose” is a fine episode, rarely a fan favorite – though actually I think the plot is kind of fun – but there is a dullness to the execution that just sort of lays there. The dialogue just isn't quite as strong as the earlier episodes this season. There is a bit of suspense in terms of Rose contacting Issac Newton randomly through the phone book, so what are the odds he'd turn out to be as naive as Rose? I don't know what it is exactly, maybe it's the somewhat bland performance from Paul Dooley (the character is sort of a snore), who will return this season in the fan-hated “Empty Nests” episode. I'm depressed, I need a cookie. GRADE: C+
Posted by Chris at 1:57 PM