Dancing in the Dark S5E6 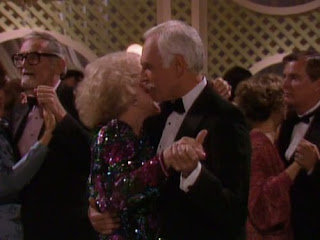 Synopsis: Rose is dating college professor Miles and feels stupid around him and his friends; Blanche is in a dating slump.

Dorothy: “Ma, this-this place is fantastic. I feel like I did when I was 20.”
Sophia: “You mean unmarried and pregnant?”
I thought Dorothy got pregnant in high school at the senior prom she may or may not have gone to.
Also, Rose asks Miles what a metaphor is but she obviously doesn’t remember that Blanche explained metaphors in “Dorothy’s New Friend.”

Musical Moments
Man in ballroom: “Would you care to dance?”

Dorothy: “Oh, I-I don't think so.”
Man in ballroom: “Oh. I'm usually not this forward, but Glenn Miller has such an effect on me. You don't like Glenn Miller, do you?”
Dorothy: “Oh are you kidding?? I was in the search party!”


St. Olaf Vocab
Gerflufen – loosely translated, it means, “I hope you have a license to carry that gerflufen”


Take Me Out to the Ballgame, Stanley
Miles: “If you're not busy Saturday afternoon, the university is playing Shostakovich.”
Rose: “Oh, I'd love to go. And I'll bet we’ll beat 'em.”
Dorothy: “Rose, honey, it's not a team. It's a composer.”


That’s What She Said
Blanche: “Just breathe it in his ear. Nothing sounds idiotic if it's wet enough.”

Lewd Ladies
Rose: “You know, you can learn a lot about a man just by the way he holds you in his arms. Whether he's kind, sensitive, caring-”
Blanche: “He dipped you, didn't he?”
Rose: “All evening.”
Blanche: “Oh, Lord. It’s so long since I've been dipped. I can't even remember which end of a gerflufen is up.”

Zbornak Zingers
Dorothy: “Blanche, it takes a strong, confident, sophisticated man to appreciate you. But honey, they're out there wanting you as much as you want them.”

Blanche: “I knew it had to be something like that. Thank you, Dorothy!”
Dorothy: “There really is one born every minute.”

Insult Watch
Blanche: “This is the fifth Friday night in a row I haven't had a date.”
Dorothy: “Honey, you're just in a little slump.”
Blanche: “Is that what this is? I never been in one before. Well, it feels like hell. Dorothy, how do you go through this for years at a stretch??”

Product Placement
Dorothy: “Blanche, what are you doing lining shelves on a Friday night?”
Blanche: “I'm workin' off all my excess sexual energy.”
Dorothy: “Why don't we just hook you up to the toaster and make Pop-Tarts?”

Sassy Sophia
Dorothy: “Oh, Ma, you going to the ballroom again?”
Sophia: “No. I was thinking of wearing this when I die. What do you think?”

Back in St. Olaf
Miles: “Oh, listen to that music. Who says you can't go home again?”
Rose: “Canute Trollsted. You see, he took Ilse Frickerdeller up to Smooch Point to play hide the fingerborg. That's a thimble. Well, Ilse sat on his compass, and they got so lost they walked to Finland, and that's when Canute said, ‘You can't go home again.’”

Best of B.E.D.
Blanche: “I sat down and tried to think of a surefire place to meet men. It was so obvious I couldn't believe I hadn't thought of it before. The hardware store. I mean, hardware stores are alive with sexual energy. Tools, plugs, sockets, nude furniture, dirty stuff like that.”
Dorothy: “Why are you home so early?”
Blanche: “Well, I saw a very attractive man in power tools. I piqued his interest with the usual hardware questions. ‘Where does this go? What does this do?’ And he followed me to plumbing, where I bought a see-through shower curtain.”


Blanche: “I'd rather be tied to a tree covered in honey and have a family of grizzlies lick it off.”

Sweet, Single-Digit-IQ Rose
Rose: “You're a college professor?”
Miles: “Well, what did you think I meant when I said I taught Hemingway?”
Rose: “I thought you were old.”

From Feud to Food
Miles: “Boy she left in a hurry.”

Sophia: “Hey, who told her to feed me cabbage!”

What, We Can’t Learn From History?
Sophia: “The place was packed with old geezers ripe for the picking. I charged them 10 cents a dance.”
Dorothy: “Ma, you didn't!”


Sophia: “Please. I worked hard for that money. Half the time they'd fall asleep in the middle of a song. How would you like to hold Mr. Morelli up for two choruses of ‘Jeepers Creepers?’”
Dorothy:  “Ma, you did all that for 10 cents?”
Sophia: “I know. It's worth a buck. But all these guys lived through the Depression. For a buck they expect a good time, a shoe shine, and a full tank of gas.”


Harv: “Oh, come on, Elise. The whale represents coming to terms with the self-hatred that's in all of us. What do you think?”


Rose: “Uh I-I was just having a conversation with two people over ther,e speculating, on if you could have any two people in the world, living or dead, to your house for dinner, what would you eat?”

Dorothy: “Ma, where are my dancing shoes?”
Sophia: “In the Smithsonian, right next to Fred Astaire's. How the hell would I know?”

Golden Quotes
Rose: “Miles is my dancing partner at the ballroom.”
Miles: “Oh yes, and tonight we were the king and queen of the rumba.”
Rose: “Ole!”

Dorothy: ““You wanna help us out here, Rose?”

Rose: “When we're on the dance floor, it feels like we're made for each other. But tonight, with all his brilliant friends at the party, I felt like a fish out of water. Oh, sure I didn't flop around on the floor with my eyes bulging out gasping for air. I haven't done that at a party in years.”

Sophia: “Cabbage, she serves me. In ten minutes I could be sky-writing.”

Rose: “You girls were right about getting Miles on my turf. Oh, Blanche, and I'm really grateful for you steering the table talk to things I know about.”
Blanche: “Well, you ought to be. It wasn't that easy working natural fertilizer into the dinner conversation.”

Blanche: “It's impossible. I'd - I'd feel like a I'd feel like a-”
Dorothy: “A backstabbing slut?”
Blanche: “No.”
Rose: “Then please go, for me. I'll feel better knowing this thing is finally over with.”
Blanche: “Well, since you put it that way but only as a personal favor to you, honey. Well, I guess I'd better go get dressed.”
Rose: “Thank you, Blanche. Can you believe that backstabbing slut??”


Critique:
Holy moly, even if this is a Rose-centric episode, this half hour BELONGS to Blanche Devereaux. I think Blanche is funnier during her droughts than she is when she’s got men clawing for her attention.  It’s not unknown that the character of Rose became dumber and dumber as the series went on. She was always prudish and naïve but by Season 5 she became borderline mentally deficient. The stupider Rose is the more fun we have. That is played to the hilt here.  It’s all in good fun. There’s some really funny dialogue here, much of which has become all-time classic GG lines (“He’s not dead. He’s missing!”). And then there’s the introduction of Miles, one of the most polarizing GG characters. Personally, I think he’s delightful. I love the Miles episodes. Are we supposed to buy that he’s actually in the Witness Relocation Program? Not really. Does it suck that he “lies” to Rose. Sure. But I think setting the terminally naïve Rose up with a brilliant college professor just makes sense to me. A final note: while I don’t like to judge people based on their appearances, Bea Arthur looks particularly horrendous in this episode. I wonder if the producers finally realized that Dorothy is supposed to still have Chronic Fatigue Syndrome? GRADE: B+
Posted by Chris at 12:01 PM