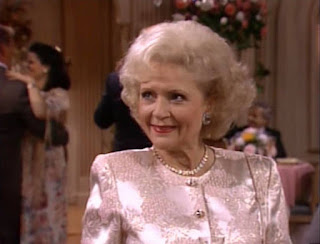 Crazy Continuity
The guy who hits on Rose at the wedding ends up playing the doctor who performs her triple bypass surgery.

Let’s Get Political
Blanche, locked in a bathroom stall: “Dorothy, will you let me out of here?”
Dorothy: “No way, Blanche.”
Blanche: “Oh! Well, you can't do this. It's a violation of my civil rights.”
Dorothy: “Well you have the time, you have the paper. Why don't you sit down and write a long letter to your senator?”

Lewd Ladies
Rose: “Is it just me, or did anybody else notice the buns on that priest?”

Picture It
Rose: “What's so special about this wedding?”
Sophia: “Dorothy's goddaughter is marrying the grandson of Giuseppe Mangiacavallo.” [spits]
Dorothy: “So?”
Blanche: “Let her tell the story.”
Sophia: “When I was 14 in Sicily, my father arranged a marriage with a neighbor's son. My dowry was two chickens, a ladle, and a goat to be named later.”
Dorothy: “We came from a wealthy family.”
Sophia: “But the day of my wedding, as I stood at the altar, the boy I was to marry was on a cattle boat headed for America. That night, on a tear-stained pillow, I put a curse on him.”
Rose: “A curse?”
Sophia: “Nothing fancy. I remember I said, 'Giuseppe Mangiacavallo, from this day forward, may you and all your future generations never know true love. May you be sterile, and may all your offspring be sterile. May your hair never lie flat, and may your socks always slip down inside your shoes.'”

Zbornak Zingers
Dorothy: “Oh, Blanche, don't you see? We were supposed to look after her. We knew that she gets hot at weddings. She was counting on us.”
Blanche: “You don't look after me when I get hot.”
Dorothy: “That's because I also have a day job.”

Sassy Sophia
Rose: “Miles can't take me to the wedding. He's gonna be out of town at a teaching seminar. Now I can't go.”
Dorothy: “Well that shouldn't keep you from going.”
Rose: “Oh, I have my reasons. It's a long story.”
Sophia: “Gotta run!”

Back in St. Olaf
Blanche: “Now, what's this all about?”
Rose: “Well, it started forty years ago...”
Dorothy: “Oh, my God.”
Rose: “...at my wedding in St. Olaf's Great Shepherd Church. Oh, it was beautiful. Especially when all those balloons dropped from the ceiling.”
Dorothy: “You had balloons in the church?”
Rose: “Well, it's not as if we filled them with air. We learned our lesson. I mean, you put air in them, and the St. Olaf Boys' Choir would use them to make those disgusting noises.”
Blanche: “Go on with your story, darling. I care deeply.”
Rose: “Well, after the wedding, Charlie and I had the most exciting, passionate night of our lives. After that, whenever we'd go to a wedding, we'd end up going home and putting on the cast album of Song of Norway, and going crazy on each other!”
Dorothy: “What are you saying, Rose? Weddings get you hot?”
Rose: “Yes.”

Sweet, Single-Digit-IQ Rose
Rose: “I have a steady boyfriend, and he's out of town, so unfortunately I'm not available. Unless, of course, you like jazz.”
Doug: “Well, I've got Dizzy Gillespie back at my place.”
Rose: “Does he like jazz?”
Doug: “Why don't we find out?”
Rose: “Okey-dokey, daddio.”

Reel References
Dorothy: “Don't worry, honey. Nothing to worry about. We're here to look out for you.”
Rose: “Oh, I just hope the band doesn't play the St. Olaf Wedding March.”
Dorothy: “I think the chances of their playing that are pretty slim.”
Rose: “Well I don't know. It got awfully popular after Laurel and Hardy started using it as their theme song.”

Sophia: “Uh, this could take a while. And it won't be pretty. Did you ever see The Exorcist?”
Giuseppe Mangiacavallo: “No.”
Sophia: “Good movie. Well, here goes. Oh, sorry, kids. Don't stop on my account. Curse is over.”

Golden Quotes
Rose: “I mean, it was fine while Charlie was alive, but oh, I'll never forget that first wedding after he died. So now you see why I can't go if Miles is gonna be out of town. I might end up almost going to bed with the caterer again.”
Blanche: “Rose, I want to help, but first you have to tell me what the problem is.”

Dorothy: “Doug.”
Blanche: “All right, Doug. But listen. Don't you forget, you be careful. This man is on loan from the Blanche Devereaux collection.”

Blanche: “This is the last time I ever date a doctor. Imagine dumping me for an emergency appendectomy! I just hate it when doctors use the Hippocratic oath as an excuse for everything.”
Dorothy: “Blanche, it was his appendix!”

Blanche: “I feel all warm inside. This must be what they call the joy of giving. Feels a lot like cramps.”

Blanche: “You know, Dorothy, there is a thin line between having a good time and becoming an obvious wanton slut. I know. My toe's been on that line.”

Rose: “Sophia. Am I the only one who feels like ripping her clothes off and doing the Hokey-Pokey?”
Sophia: “No, Rose. I think they're just waiting for someone to get them started.”

Dorothy: “Sounds to me like you two just had a little misunderstanding. NOT FIVE YEARS OF DELIBERATE BETRAYAL OF TRUST!!!”
Blanche: “Dorothy, you do that one more time, I'm gonna write on this wall, ‘For a good time, call Dorothy Zbornak.’”
Dorothy: “Blanche, this is the ladies' room.”
Blanche: “Right!”

Dorothy: “Ma, have you seen Rose?”
Sophia: “She left with Doug. Boy, were her eyes twirling!”

Dorothy: “You know, Blanche, I owe you an apology. How can I be high and mighty about my friendship with you when I can't do Rose the simple favor of keeping her out of trouble? What I have to do is remember you for the person you are, and, accept you for that.”
Blanche: “I'm sorry, Dorothy, what did you say? I thought I had established eye contact with one of the guys in the rhythm section.”

Critique:
Ok where do I start? I’m still a tad confused about how exactly Dorothy and Sophia are related to Jenny the bride. She calls both Dorothy and Blanche “aunt” and she’s apparently Dorothy’s goddaughter and yet she’s never made an appearance until now. Kinda like Mary the knocked up teen (hopefully she turned out all right). And what a strange coincidence that she happens to be marrying the grandson of the man who shamed Sophia. But I digress. Can we talk about how horny Blanche and Rose are in this episode? I love a wedding as much as the next guy but dear God. I love when Rose is either mean, competitive, or horny, it always makes for a fantastic episode. The way she lusts after the waiter after being offered a cocktail wiener is classic. And then there’s Blanche’s “list.” If Doug is on her B-list then I’d hate to see her C-list. I mean I guess he’s a catch for a menopausal middle-aged woman but geez what a loser. Let’s go back to the whole “Rose gets hot at weddings” thing. I’ve lost track of how many weddings the girls attend on this show. Let’s take Sophia’s wedding with Max. You don’t see Rose grinding up against an Elvis impersonator. It feels a little random but I can’t fault it, it adds up to some great comedic moments. GRADE: A-
Posted by Chris at 6:47 AM