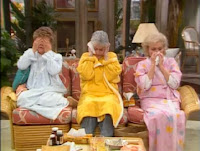 Synopsis: Sick with the flu, Blanche, Rose, and Dorothy become competitive when each of them think they've won the Best Friend of the Friends of Good Health Award at a local charity banquet.

80s Flashback
Emcee: “It's time to present the Friends of Good Health's Best Friend of the Year Award. But before we go any further, I have an announcement to make. Don Johnson, star of Miami Vice. who was originally scheduled to be here, will be unable to attend. However, the producers of the show were kind enough to send over the clothes that he was planning to wear here tonight.”

Crazy Continuity
Doesn't waiter Tommy Cochran look awfully like the doctor who tells Rose that she doesn't have AIDS?

That’s What She Said
Rose's date: "Sucret?"
Rose: "Oh, no thank you. I'm still sucking on a Smith Brothers."

Dorothy: “Well, at least I have a man.”
Blanche: “Have one? Sounds like you swallowed one.”

Lewd Ladies
Blanche: “Dorothy, where's my heating pad?”
Dorothy: “How should I know?”
Blanche: “If this isn't it, I'd like to know what other electrical appliance you're using under that blanket.”

Picture It
Sophia: “In Sicily, we never went to the doctor. We went to the Widow Caravelle. Whatever you had, she had a cure. She was best known for this green salve she used to make to treat ear infections. One day, she gave a batch to Salvador, the village idiot. He misunderstood the directions and put it on his linguine instead of in his ear. As it turns out, it wasn't such a bad thing to do. The stuff tasted great and Salvador decided to market it. At first, it didn't move so well. Linguine with Ear Salve on a menu doesn't look too appetizing. But once he changed the name to pesto sauce, it moved like hotcakes.”

Zbornak Zingers
Blanche: “You really think selling candy's gonna qualify you for that prestigious award?”
Dorothy: “Oh, excuse me. I didn't realize that slipping my tongue to half the firemen in the county was a more lofty social achievement.”

Insult Watch
Dorothy: “I don't care about your chest. I just care about my chest.”
Blanche: “Well, you're the only one who does.”

Product Placement
Dr. Richmond: “Why don't you tell me the kind of symptoms you've been having.”
Rose: “Well, I have a fever and my throat is sore and my stomach is upset and I keep having this recurring dream where I'm being chased by a giant Listerine bottle. And when I open my mouth to scream, all I can do is gargle.”
Dr. Richmond: “Ah. Are you experiencing the same symptoms?”
Dorothy: “Yes, except in my dream, I'm chased by a bottle of Scope.”


Best of B.E.D.
Blanche: “I haven't had to disappoint so many men since daddy tore down the tree house.”

Golden Quotes
Blanche: “I never get sick. I take very good care of myself. I treat my body like a temple.”
Sophia: “Yeah, open to everyone, day or night.”

Critique: This episode, going by either names of "The Flu" or "Flu Attack" is easily one of the top five episodes of Season One. One thing you'll hear me say ad nauseum is how much I love it when the girls are at each other's throats. This is the most competitive they've been since The Competition. And the fact that they’re all sick with the flu makes it even funnier. This episode is filled with great moments like Sophia's classic ear salve story and the joke the female doctor makes is hilariously weird. This is one of many episodes where the girls will attend (or help plan) some kind of charity event or banquet. They were charity nutjobs apparently (though we later learn Dorothy doesn't give a flying fig about whooping cranes). GRADE: A-
Posted by Chris at 2:45 PM