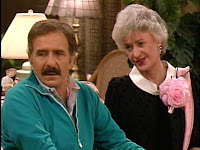 Synopsis: The girls take in Stan who's recovering from heart surgery, but begins to take advantage of their hospitality.

80s Flashback
Dorothy: “Blanche, you were unfaithful to George?”
Blanche: “Oh of course not, I was only flirting. There's nothing wrong with that. It keeps you healthy, keeps you in shape. Keeps your buttocks firm.”
Dorothy: “And I wasted all that time on Jazzercise.”

That’s What She Said
Stan: “She didn't mean a thing to me. She was a waitress in a little Greek diner on the way to work. Every time I’d come in she'd put some rolls on the table and say, 'Can I butter your buns, Stan?'”

Take Me Out to the Ballgame, Stanley
Sophia, watching TV: “You call that wrestling, you pansy? If you can't take a crotch slam like a man, get outta the business!”

Lewd Ladies
Rose: “This is not just a plate, mister. This is a family heirloom. It's Great-Great-Grandma Nylund's ceremonial wedding plate...The bride's family fills the plate with fruit and then at the wedding all the guests eat from it. And when the last piece is gone, that's when the bride and groom leave to start their wedding night, which takes place in a tent or a Best Western. The Vikings have always been a very progressive people. Anyway, that's when it's time for the husband to symbolically 'offer himself' to his new bride… on the plate.”
Stan: “Yeck! I ate a tuna sandwich on that plate this afternoon.”
Rose: “Stan, I'm never going to forgive you for this. My niece is getting married in the spring. What's her husband gonna do?”
Blanche: “I bet a gravy boat would work in a pinch.”

Zbornak Zingers
Sophia: “Finally going ahead with that hair transplant?”
Stan: “Sophia, not everyone knows this isn't real.”
Dorothy: “Oh please Stevie Wonder could tell it's a rug.”

Insult Watch
Blanche: “Stanley, don't you think it's kind of a coincidence you get a relapse on the very day the doctor says you're ready to move back into your own apartment?”
Stan: “What can I say, the heart's a funny organ.”
Blanche: “I bet most of your organs get a laugh.”

Product Placement
Sophia: “You Blanche, I have a recurring dream. John Cameron Swayze straps a Timex to my chin and tosses me across an icy pond. I looked it up in a book of symbols but it wasn't there.”

Back in St. Olaf
Rose: “Sometimes people need help making decisions. That's the way it was with Thor. Our pet lamb. From the time he was first separated from his mother, he wouldn't eat, he wouldn't sleep, he wouldn't frolic with the other sheep. You're slipping into verse, Rose. Keep it simple. Daddy got the idea of taking this old inner tube, wrapping it in wool and putting it next to Thor's bed at night. We named it Brun Hilda. And believe it or not it did the trick. Thor felt like he was back with his mother and he began eating and sleeping… and frolicking, yes! But then one day, Thor got playful and accidentally bit Brun Hilda. The poor little guy just stood there, watching his mother deflate before his very eyes. He was never the same after that. Oh sure, once in a while he'd baaa at the back tires of a parked car. But for the most part, he just kinda kept to himself.”
Dorothy: “I think I'm beginning to see your point.”
Blanche: “You do??”
Dorothy: “Who cares? You wanna hear the sequel?”

Best of B.E.D.
Blanche: “There's something strangely provocative about this evening. Oh of course I would never have a relationship with both twins at the same time, that would be obscene. Unless, of course, it was tastefully done.”
Literary Intelligentsia
Dorothy: “Now, Stanley, it's time that you grew up. Happy birthday, Peter Pan.”

Golden Quotes
Rose: "Maybe I should drive a knit mobile!"
Sophia: "Maybe she should drive a nitwit mobile."
Rose: “We just wanted to stop by and wish you luck in case we don't see you again. Before you leave, for the hospital, not another world.”
Blanche: “Let's not bother him anymore. Let Stan rest in peace.”


Critique: So before Stan goes in for his surgery he confesses all the times he fooled around on Dorothy. She seems so shocked that Stan of all people was cheating on her throughout their marriage. Duh. And apparently Strawberry Quik helps Stan fall asleep. That is the dumbest thing I've ever heard and I can't believe Dorothy wouldn't just give him a death stare. Anyways, this episode has always been just “alright” for me. I enjoy Stan in small doses, but sometimes his presence, especially in the earlier episodes aren't that exciting. I still think that it's weird for Dorothy to keep taking care of Stan every time he has a problem, which she admits at the end of the episode. And speaking of which, is it weird how abruptly the episode ends? I feel it would have been better if Stanley faked his relapse for the third act instead of the last three minutes. The best part is easily Rose's St. Olaf story about Brun Hilda. This season has seen much better episodes, including the one coming up… GRADE: B-
Posted by Chris at 6:18 PM