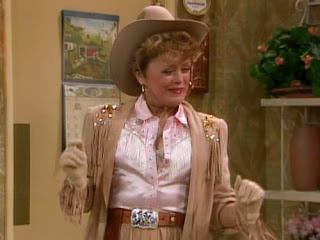 Synopsis: Blanche is afraid of commitment after her boyfriend has a heart attack; Rose invites the girls to a positivity seminar with a bunch of grinnin' idiots called “Create Your Own Miracles.”

Take Me Out to the Ballgame, Stanley
Dorothy: “I have some incredible news!”
Sophia: “You've been traded to the Rams?”

Lewd Ladies
Dorothy: “Steven, nice to see you again.”
Steven: “Dorothy, it's nice to see you. Do you mind if I get something drink? I must have sweat off ten pounds today.”
Dorothy: “You played a lot of tennis?”
Steven: “Tennis.”
Blanche: “Yeah, right.”

Picture It
Blanche: “I wish I knew what to do.”
Sophia: “All right, all right. I can pick up a cue. Picture it. Sicily, 1912. A beautiful, young peasant girl with clear, olive skin meets an exciting but penniless Spanish artist. There's an instant attraction. They laugh, they sing. They slam down a few boilermakers. Shortly afterwards, he's arrested for showing her how he can hold his palette without using his hands. But I digress. He paints her portrait and they make passionate love. She spends much of the next day in the shower with a loofah sponge, scrubbing his fingerprints off her body. She sees the portrait and is insulted. It looks nothing like her. And she storms out of his life forever. That peasant girl was me and that painter was Pablo Picasso.”
Dorothy: “Ma, I have a feeling you're lying.”
Rose: “Be positive, Dorothy.”
Dorothy: “OK, I'm positive you're lying!”

Zbornak Zingers
Blanche: “I used to attract men who were young and active and virile, but now they just want to date girls in their 20s and 30s. What's a great-looking gal in her 40s to do?”
Dorothy: “Perhaps we should find one and ask her.”

Insult Watch
Blanche: “Everything old and familiar has become new and exciting.”
Dorothy: “Oh. That's nice. Maybe I should look up one of my old flames.”
Sophia: “Yeah, but not Stan. The other one.”

Sassy Sophia
Blanche: “What's the point of wearing this if I've got nothing to put in it?”
Sophia: “I say the same thing every morning when I put on my bra.”

Back in St. Olaf
Rose: “Dorothy, in times like these, you have to hold onto your faith, just like Hans Gluckenflunken, St. Olaf's greatest explorer.”
Dorothy: “Rose, please, let me have a little recovery time before you start a St. Olaf story.”
Rose: “You see, Hans Gluckenflunken set out for Florida to find the Fountain of Intelligence. Unfortunately, when he got to Duluth, he took a left instead of a right and he wound up back in St. Olaf. That's how he got his nickname, Wrong Way Gluckenflunken.”
Dorothy: “Rose, how is this a story about faith?”
Rose: “Well, when he got back, it was the dead of winter. Tired and hungry and but still clinging to his belief that he would find the Fountain of Intelligence, he saw the miracle water trickling out of the ground, and he fell to his knees and tasted it. Unfortunately, it was a broken sewer main. Two days later, he died of cholera.”
Dorothy: “What is the point, Rose?”
Rose: “He was positive he had found the Fountain of Intelligence. In fact, his dying words were, 'I think I've learned something from this.'”
Blanche: “Girls, am I interrupting?”
Dorothy: “I sincerely hope so.”

Best of B.E.D.
Blanche: “Oh, Dorothy, you always give me the best advice about men. Who says wisdom comes from experience”

Sweet, Single-Digit-IQ Rose
Mary Ellen: “You're special too, and do you know why? Because you're you, and there is nobody else like you in the whole world. Do you understand that?”
Dorothy: “Only an idiot wouldn't understand that.”
Rose: “Mary Ellen, I'm completely lost. Could you run that by me again?”

Blanche: “Look. I'm trying to keep this relationship casual. If I go to that hospital, I'm in and there's no gettin' out.”
Rose: “Don't be silly. All you do is follow the orange line down the middle of the hallways. They lead right to the elevators.”

From Feud to Food
Dorothy: “Do you know that nasty butcher down at the deli?”
Rose: “The little guy with four fingers?”
Dorothy: “That's him. I don't know, but every time I order roast beef, he cheats me. I don't know how he does it. I stand there and watch as he slices a big, juicy roast beef, but when I get home, I find these crummy, little, hard pieces, you know, from the end. Anyway, today I went in with a positive attitude. I told myself, 'This man is my friend and I know he is going to give me a good cut of meat.' Look.”
Rose: “It's a miracle!”
Sophia: “Oh, great. Pilgrims are gonna be showing up to kiss Dorothy's luncheon meat.”

The Boob Tube
Blanche: “When I'm with Steven, I don't know, I get goose bumps, I feel all tingly.”
Rose: “Oh, I understand what you're talking about. I feel the same way when I hear the words, 'And filling in for Doc, Tommy Newsom.'”

Rose: “Hi, girls. What a great day. I feel so terrific. It's like life is a giant weenie roast and I'm the biggest weenie.”
Sophia: “No argument from this corner.”


Rose: “How about you, Sophia? Remember, today is the first day of the rest of your life.”
Sophia: “Terrific. If I'm lucky I may live to be seven.”

Sophia: “Remember what your cousin Frederico used to say: 'People waste their time pondering whether a glass is half empty or half full. Me, I just drink whatever's in the glass.'”
Dorothy: “Ma, Cousin Frederico was a hopeless alcoholic who played boccie ball with an imaginary friend named Little Luigi.”

Rose: “It's not a good idea to go it alone. Did I ever tell you about my cousin Vigdor Fricken? He tried to go it alone in a three-legged race. Well, you know what happened to him?”
Dorothy: “Please! Please, Rose! I don't want to hear about your frickin' cousin.”

Critique:
Hi reader! You're special! So first off, I actually wonder where exactly Blanche's gun went to? Maybe Rose started up her target practice again? But I digress. This episode is sort of just ok isn't it? I mean you've got your Blanche in cowgirl outfit which is fun. And there's the whole “You're Special!” scene with all those grinnin' idiots. But besides that there isn't much memorable stuff going on here. There are a couple other standout moments including one of my favorite Sophia stories involving her alleged affair with Pablo Picasso. I think it's one of the few stories of hers I can recite perfectly from memory. Rose's Fountain of Intelligence story is also classic. I don't know, it seems like the writers were still on winter break here. Probably holed up in a wintry ski resort in Colorado… with a ski instructor named Fritz… ah you know the rest. GRADE: B
Posted by Chris at 7:56 PM