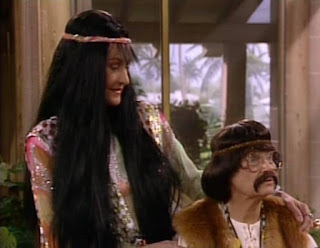 Synopsis: A young stranger arrives to break some awkward news to Blanche that involves her late husband; Dorothy and Sophia participate in the Shady Pines Mother-Daughter Beauty Pageant.


The piano's back! Dorothy and Sophia sing “I Got You Babe” with Rose's piano accompaniment until she gets upset because the song always takes her back to the 60s.


Sophia: “Well, Rose, do I look like the mayor of Palm Springs?”


Rose: “Doug Henning is the mayor of Palm Springs?”


Sophia: “Look, pussycat. I found matching dresses we could order for the evening-gown competition.”


Dorothy: “Ma, those are totally inappropriate.”


Sophia: “Don't worry. They come with matching panties. For when we do the cartwheels.”


Dorothy: “Ma, why can't we wear something simple in basic black?”


Sophia: “It's a bad idea, Dorothy. You wear black at Shady Pines and they'll stop the show for a head count.”


Sophia: “How many challenges do I have left in life? Seeing if I can get halfway across the street before the Don't Walk sign comes on. Trying to stay awake on the john. Hoping it is the john. Competition is the thing that keeps me going. But, if you want me to let it go.”


Sophia: “You've made me a happy woman. Now, if you want to go the extra mile, I hear one of the judges has a fetish…”


Sophia: “I know how you feel. I hate to say it, but Sal almost cheated on me once.”


Sophia: “I was pregnant with your brother Phil. And just because I put on 40lbs and was crying all the time, your father got the wandering eye.”


Dorothy: “Did you ever find out who it was?”


Sophia: “I never actually met her, but I heard she was a short, scrawny, birdlike thing who never shut up. I guess variety is the spice of life.”


Dorothy: “Well, there are two popular theories. One, men are victims of an evolutionary process which genetically programs their sexual habits.”


Blanche: “What's the other theory?”


Sophia: “This contest is my chance to put that old witch in her place, once and for all. Not only am I a looker, but I have a daughter twice as beautiful as hers.”


Sophia: “And then I thought, ‘Wait. Your sister Gloria is in California. So it's you or nothing.’”


David: “George Devereaux, your husband, was my father.


Blanche: “Get out of my house. I did not hear what you just said.”


Rose: “Well she didn't hear what he said and she was this upset. Can you imagine if—


Blanche: “Whenever I have something hard to say, I just say it fast. Like back in high school, when I wanted to break up with Carl Dugan, the captain of the football team. Well, I was very nervous. So I just spat it right out. ‘Carl, I'm dumping you for Coach Wilkins.’ Afterwards, I felt much better.”


Rose: “Make way for the winners of the Shady Pines mother-daughter beauty contest!


Dorothy: “No actually, we're just the runners-up. But if the reigning winners for any reason can't fulfill their duties...”


Sophia: “And I'm telling you, the winning mother and daughter are 98 and 77. If either one of them forgets to take a nitroglycerin even once, Dorothy and I are gonna be cutting ribbons at Piggly Wiggly.”


Sophia: “Pussycat, when's the last time I told you you were beautiful?”


Dorothy: “Oh, now, that is really odd. I mean, if he's selling encyclopedias, why didn't he try to sell us a set?”


Rose: “You know what else is so strange about it? He didn't bring them in.”


Rose: “I know what you mean. I should have said no to the Miss St. Olaf beauty pageant. It was 1951. That was the first year they let humans enter too. I was way ahead after the evening-gown and log-rolling competition. People don't realize how hard it is to roll a log when you're wearing an evening gown. And the shocker is I lost out on the intelligence quiz.”


Blanche: “I've been going through my diaries. Just listen to this. 'March 3, 1967. George just back from Dallas. Surprised me with the most beautiful diamond earrings. I love him so much it takes my breath away. Ours is a love so pure, so complete, it'll outlast time itself. I'll have the earrings appraised next week.'”


David: “I was always told my dad died before I was born. Then I found my birth certificate. And there, listed as my father, was George Devereaux.”


Rose: “Well maybe there was another George Devereaux in Miami…”


David: “This was the address in my mom's old book.”


Rose: “I'm sorry. But this song always takes me back to St. Olaf in the '60s. And the controversial issue that nearly tore the town apart.”


Rose: “Opposite-side-of-the-street parking. Nobody could understand the concept. I mean it doesn't matter which side of the street you park on, there's always an opposite side.”


Sophia: “What an injustice. Hemingway ran out of stories to tell and shot himself. She just keeps on going.”


Blanche: “Oh, how could George betray me this way? Dammit, those wedding vows were sacred to me. Well, they must have been. I turned down hundreds - thousands of offers. Teachers, doctors, astronauts. I even said no to a journalist famous for his work on '60 Minutes.' Now, if that's not fidelity, I don't know what is. Then I find out that the only man I ever loved cheated on me. On me! Oh, I could just die.”


Blanche: “Oh, for goodness' sakes. Why, you two could be celebrity look-alikes.”


Rose: “A sex-crazed psycho with a granny complex. Sorry, Blanche. I gotta call 'em as I see 'em.”


Dorothy: “Rose, hand me that newspaper.”


David: “I know this is painful for you, but there's so much I need to know. What did he do for a living? Was he funny? Did he have any hobbies?”


Rose: “Blanche, I thought you were in bed.”


Blanche: “Oh I couldn't sleep. It must be from living with old people.”


Dorothy: “Gee, I wonder how many maître d's have heard that line?”


Sophia: “Ah, it was a hollow victory. Time has taken its toll on Gladys. She's not the fierce competitor she once was.”


Dorothy: “You know for the talent section she was supposed to do a medley from The Fantasticks. She started with 'Try To Remember,' and she couldn't.”


What better way to celebrate Halloween than with some fantastic Sonny and Cher costumes? After all we all know there were never any Halloween episodes on the GG. “An Illegitimate Concern” is a fantastic Blanche-centric episode that is mostly known as “the one when Dorothy and Sophia sing I Got You Babe as Sonny & Cher.” Blanche's storyline here is pretty heavy. I would assume it would be difficult to deal with an illegitimate child showing up at you door but the saddest part to me is that BLANCHE MISSES THE SHADY PINES MOTHER-DAUGHTER BEAUTY PAGEANT!!! WTF!!! GO BACK TO DALLAS, DAVID!! Phew, glad I got that off my chest. Anyways, even with all the heavy subject matter this is still a pretty hilarious episode with Marc Cherry's always clever dialogue. I still find it odd that Sophia would go back to Shady Pines on purpose but I just went with it. Lastly, who would KILL to see the Shady Pines Circus? Do you think it's just like old people riding on elephants and stuff? Fun Fact: Actor Mark Moses who plays David would later go on to co-star in Marc Cherry's hit ensemble mystery dramedy "Desperate Housewives." GRADE: A