Yes, We Have No Havanas S4E1 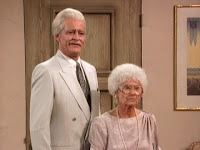 80s Flashback
Dorothy: “Where are you going tonight?”
Sophia: “Fidel is taking me to the Burt Reynolds Dinner Theater to see Ruth Buzzi in 'Evita.'”

Crazy Continuity
Here we learn Rose never graduated high school. But last season in “Nothing to Fear But Fear Itself” Rose talks about how she was chosen to be valedictorian by drawing straws.

Let’s Get Political
Rose, talking about her Nazi history teacher Mr. Shticklemeyer: “His orders came right from the top.”
Dorothy: “You mean Hitler?”
Rose: “Who's Hitler?”
Dorothy: “You are bad at history.”

That’s What She Said
Rose: “You're looking at a woman without a sheepskin.”
Jim Shu: “I've got an extra in my wallet I could give you.”
Rose: “No, thanks. I'd rather earn it.”

Lewd Ladies
Rose: “You're awfully cranky today.”
Sophia: “Well, forgive me. My arthritis is bothering me, my social security check was late, and I realized today I haven't showered with a man in 22 years.”
Dorothy: “Ma, Pop's been dead 27 years.”
Sophia: “What's your point?”

Zbornak Zingers
Fidel Santa Domingo: “My family once owned the largest tobacco plantation in all of Cuba. Do you know that at one time I was the most famous Fidel in the entire country? Until you-know-who showed up.”
Rose: “Who?”
Dorothy: “Rex the Wonder Horse, Rose.”

Insult Watch
Dorothy: “It means you won't get your diploma.”
Rose: “Yeah? Well, you have a big behind.”
Dorothy: “Oh, Rose, Rose please, let's try to keep this on an adult level. And if you wanna talk behinds, they could show 'How the West Was Won on yours.'”

Product Placement
Fidel Santa Domingo: “Now, if you will excuse me, it's time for me to change into my third linen suit of the day. In this heat I go through them like Kleenex.”
Rose: “Dorothy, I have a confession to make. I slipped through the cracks of the St. Olaf school system.”
Dorothy: “That's very hard to believe. I've seen you almost complete a TV Guide crossword puzzle.”

Sassy Sophia
Fidel Santa Domingo: “Blanche was right. She said you were incorrigible.”
Sophia: “I guess I deserve it, I always say she's a cheap slut.”

Back in St. Olaf
Dorothy: “Rose, you never graduated from high school?”
Rose: “Not officially. Three weeks before graduation, I was asked to be in the kissing booth at the Founders Day fair. Unfortunately, the first boy I kissed had a nasty case of mono. Well that afternoon, I passed it along to 50 young men. And one very confused female P.E. teacher who smelled of Old Spice. I slept day and night for the next six months and when I finally woke up I had missed my graduation and the integration of major league baseball.”

Best of B.E.D.
Blanche: “Oh, why would Fidel want another woman?? After all, he's dipped his toes in the lake known as Blanche.”

Sweet, Single-Digit-IQ Rose
Sophia: “Who'd have thought Blanche would date somebody that long in the tooth?”
Rose: “I thought his teeth were nice. What I couldn't believe was how old he was!”

Reel References
Blanche: “Girls, look, I know it seems strange, but I happen to have strong feelings for Fidel. I can't explain it. Some things in life defy explanation.”
Rose: “Yeah, like Bruce Willis' hair.”

Rose: “Wow! Dinner out with the girls! Oh, let's really get crazy. We'll eat Chinese and use forks. I know, I know! We'll pretend it's one of our birthdays and screw 'em out of a cake.”

Blanche: “Now, if you'll excuse me, I'm gonna go take a long, hot, steamy bath, with just enough water to barely cover my perky bosoms.”
Sophia: “You're only gonna sit in an inch of water??”


Critique: This is a delightful season opener with wall-to-wall classic lines. Blanche and Sophia fighting over the same man seems like an unlikely scenario in a show filled with unlikely scenarios, but somehow it works. Even though we don't find out Sophia has been seeing Fidel Santa Domingo—err, Santiago—until about halfway through the episode the insults come fast and quick (“There's always room for Jell-O” "Beat it you fifty year old mattress!"  "How could he possibly confuse this young, nubile body with that raisin in sneakers?"). I really like the B story about Rose trying to get her high school diploma even though it completely jives with the fact that we learned Rose was inexplicably chosen valedictorian last season. Writers Barry Fanaro and Mort Nathan really love their 3 Rs jokes – “reading, writing, and rooster inseminating.” These were also the guys who gave us “reading, writing, and ring around the bed” in Season Two's “Ladies of the Evening.” For those curious, Henry Darrow who played Fidel in old-age makeup, is still kickin' as of May 2017 at age 83. Note: I'm introducing a new category called “Sweet, Single-Digit-IQ Rose” for all of Rose's nitwit comments and observations. GRADE: A-
Posted by Chris at 7:10 AM