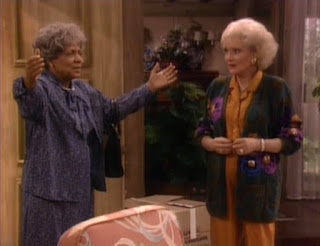 Synopsis: Blanche’s childhood nanny comes to visit and drops a bomb on Blanche; Sophia hires a matchmaker for Dorothy.

Crazy Continuity
Mammy: “Blanche Marie Hollingsworth, sit down!” Here we learn Blanche’s middle name, but in a later episode her middle name is Elizabeth (forming the joke that her initials spell BED).

Shady Pines, Ma
Dorothy: “I told you, if I want a date, I can find one for myself.”
Blanche: “Oh Dorothy. Dear, sweet, delusional Dorothy.”
Dorothy: “Blanche, if you don't mind, I'm having a heart-to-heart with my mother. Now listen up, you withered old Sicilian monkey!”
Sophia: “I don't have to take this. Keep it up, and I'll take you to Shady Pines.”
Dorothy: “That's where I take you.”
Sophia: “Ouch. Guess I backed into that one.”

Lewd Ladies
Sophia: “If you can fix Dorothy up with somebody, maybe I can get out of the house once in a while. Or at least stay in and walk around naked.”

Zbornak Zingers
Blanche: “I just can't get over it.”
Rose: “Over what?”
Dorothy: “San Juan Hill, Rose.”

Oh Shut Up, Rose!
Blanche: “Let me get this right. I don't hear from you for years and years, then out of the blue I get a phone call, and you come waltzing through that door and want me to give you a music box?”
Rose: “Oh, wait. It's Mamie!”
Dorothy: “Just under the buzzer, Rose.”
Mammy: “It was of great sentimental value, Blanche, I assure you.”
Blanche: “It just so happens we haven't found any music box.”
Rose: “Well yes, we have. It's in that box--”
Blanche: “Shut up, Rose!”

Insult Watch
Sophia: “Oh, Pussycat. Just the person I was looking for. I have a question for you, strictly hypothetical. Let's say a man wants to take you out on a date.”
Dorothy: “Why is that hypothetical?”
Sophia: “Check your calendar, Pussycat.”

Tales from the Old South
Blanche: “Big Daddy's only been gone for a year. Here I am, already selling off his things… I just didn't realize how seeing these things would bring back so many memories. Like Big Daddy's Bible. Never went anywhere without this. Whiskey. That explains why every Sunday after services, he'd stand up and yell, ‘I can lick any man in this church.’”

Blanche: “This changes everything I ever thought about Big Daddy. I always assumed that he and Mama had a wonderful sex life. I walked in on 'em once when I was a little girl. There was all this huffin' and puffin' and high-pitched sounds. Then suddenly Big Daddy shouted ‘GLORY!’ And they both lit up cigarettes. I vowed then and there I would never do anything so repulsive.”
Rose: “So what happened?”
Blanche: “Oh, Bobby Joe Porter explained to me that the cigarette part was optional.”

Product Placement
Sophia: “Hi Pussycat. Gee, you look nice tonight.”
Dorothy: “Why thank you.”
Sophia: “But lean over here and smile. I think you have something on your teeth.”
[Sophia snaps photo]
Dorothy: “Ma, why did you do that??”
Sophia: “Playboy is running a spread on the substitute teachers of Miami.”

Sassy Sophia
Sophia: “Hey, that sign says ‘No Soliciting.’ Come back here and I'll blow your head off, capisce?!”

Back in St. Olaf
Rose: “You know, I had a nanny when I was a child. She was my best friend. I could tell her anything, and I'd know she'd keep it a secret. Oh, we used to spend the days running and playing in the meadow. Or playing hide-and-seek in the barn. My nanny treated me just like I was her own kid. Excuse me.”
Dorothy: “Is there anyone here who doesn't think she was talking about a goat?”

Dorothy: “I'm still furious with Ma for hooking me up with that matchmaker.”
Rose: “That reminds me of a story about St. Olaf's most famous matchmaker.”
Dorothy: “Oh please, Rose, spare me the endless inane details of how Heidi Flugendugelgurgenplotz successfully matched a bull with a duck. And how their daughter was a bull duck who ran a small tattoo parlor in Carmel.”

Rose: “I can give advice without a damn St. Olaf story. Now what's wrong?”
Dorothy: “Well, I just don't think it was right of Ma to hire that matchmaker behind my back. Now, why does she always meddle in my life?”
Rose: “Well Dorothy, I recently read about a man in Paris, France named Frudensteufer -
Dorothy: “Rose!”
Rose: “Pierre Frudensteufer. He worked in his father's herring - no, quiche factory, and his father Lars Fr-”
Dorothy: “Do I look like I just fell off the turnip truck??”
Rose: “No. But you do look like the woman who used to drive it. Her name was Uma Van Hefflan. No relation. Although she, too, collected string. Well, one day -”
Dorothy: “Rose, stop yourself. You're doing two of them at the same time.”
Rose: “I know, and I'd like to try to handle it. I feel like Hans the Plate Spinner. Funny thing about -”
Dorothy: “Rose!”
Rose: “Oh, my God, Dorothy. I need help.”
Dorothy: “Rose, you're headed for a meltdown. Now make a point, any point.”
Rose: “The point of the story - actually, two of the stories - is that you let your pride get in the way too often. The only reason your mother did what she did was she didn't want you to be lonely. And when you think about it, the idea of a matchmaker is kinda sweet.”

What, We Can't Learn From History?
Blanche: “My mammy - the woman who took care of me when I was little.”
Dorothy: “Oh, I'm sorry. I don't think I ever heard anyone called ‘Mammy’ before.”
Rose: “What about Mrs. Eisenhower?
Dorothy: “‘Mammy’ Eisenhower. I think only the Nixon kids got to call her that.”

From Feud to Food
Blanche: “We Southerners don't forget things like that.”
Dorothy: “It's true. Possum is brain food.”

Reel References
Sophia: “I sold you to the sultan of Fatah.”
Dorothy: “Ma!”
Sophia: “What? You're a substitute teacher. It'll be just like The King and I.”

Mammy: “My friends in Atlanta read in the papers where you'd be sellin' off his things here in Miami, and before you did, there's something I'd like to ask you for.”
Blanche: “The Bible?”
Mammy: “No, thanks. I don't drink.”

Dorothy: “I'm afraid there's been a terrible mistake. Uh I think you'd better go.”
Jack: “Wait. Can I see you again?”
Dorothy: “Probably not. I will be at the Florida State Women's Prison.”
Jack: “The one in Jacksonville? They used to come to our dances. Why are you going there?”
Dorothy: “Murder!”
Jack: “You’re gonna meet some great gals.”
Sophia: “Hi Pussycat.”
Dorothy: “Say goodbye, old woman!”

Rose: “I would have died if I'd ever caught my parents having sex.”
Dorothy: “What, you never walked in on them?”
Rose: “Once, but they were only playing leapfrog.”

Rose: “I once wrote some letters to my nanny.”
Dorothy: “We know, Rose. She ate them.”

Critique:
What the hell kind of matchmaking service asks questions about schizophrenia, extra toes, and body odor? Was this really a bottom of the barrel dating service? But I guess it makes sense, after all what kind of matchmaker could Sophia afford on a fixed income? But I digress. The writers are really having fun with this episode and it shows. The rule of three is in full force with a trio of great jokes about Big Daddy having hidden a liquor bottle in his Bible. Anywho, there’s a lot to digest in this episode. The late Ruby Dee is great and makes for a welcome appearance as Blanche’s “Mammy.” I still don’t know why Mammy didn’t show up sooner seeing as though Big Daddy had been dead for a year. I wonder what skinny white boy she’s been seeing in the meantime. Any storyline that gives us funny stories about Blanche’s southern upbringing is fine by me. Dorothy’s B story about being set up with a matchmaker is sort of standard “Sophia meddling in Dorothy’s life” territory which has grown slightly stale six seasons in, but anytime they’re bickering makes for some really great comedy bits including Dorothy’s infamous “Sicilian monkey” insult. There’s not much to complain about in this one. Oh, wait. It’s Mamie! GRADE: B+ 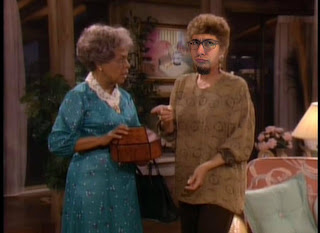