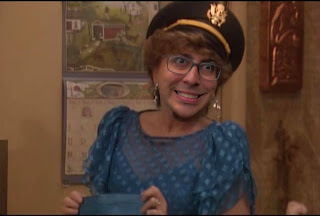 
Anyone else notice the full-on laugh orgasm the woman in the audience has when Blanche says the line “Look who I’m talkin’ to?” And then she screams again when Dorothy offers tea to Sophia. I wonder where that lady is today? But I digress. So my burning question for this episode is, will a pharmacist really just give away medicine to a woman for her son and he doesn’t even know what’s really wrong with him? He tells the lady to give her son this medicine and if it doesn’t work to see the doctor. He’s got the whole thing backwards just like Becky and her wanting to give birth in a bedroom. I digress again. I actually really like this episode even though Blanche is sort of being a dick for being disgusted by Bill’s profession. I mean, it's not like the guy is homeless or anything. Dorothy gets a lot of really funny lines here especially her “slut and a moron” crack which is a classic. There is plenty of good stuff that comes out of the B story about Sophia’s will, though to be honest, why is a woman nearing 90 years old just now writing out her will? I guess better late than pregnant! And finally, who else wants to know whether Preparation H is potent enough to shrink a purse? Paging Mr. Wizard. Note: this is the first time in the end credits scene that we get bloopers which hilariously include Sophia rambling off alternate versions of her "I, Sophia Petrillo, leave my daughter..." GRADE: A-
Posted by Chris at 12:07 PM 22 comments: