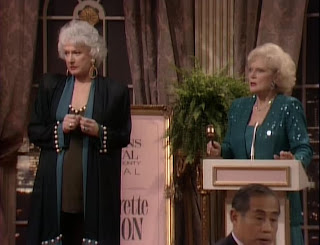 Synopsis: The girls participate in a bachelorette auction for charity; a homeless Uncle Angelo visits and Dorothy sets him up at an apartment building she and Stan just inherited.

Let’s Get Political
Rose: “If Dorothy's not off winging her way to Molokai to assist Father Damian in his work with the lepers, you can find her hang-gliding high above the Florida Keys…”
Dorothy: “Rose, where did you get that?”
Rose: “From your mother. Before she and I talked, I wasn't aware of any of it… She's a scratch golfer who, under President Jimmy Carter, served as the United States Senate Majority Whip. And she likes to read.”
Sophia [to Blanche]: “I figured, close with the truth. It'll kind of anchor the rest.”
Dorothy: “I want to thank you all for holding this event on a night when my hang glider is in the shop and, uh, Congress is in recess and the lepers are on Geraldo.”

That’s What She Said
Sophia: “I'm not happy with my zabagliones.”
Blanche: “Maybe you just need a push-up bra.”

Lewd Ladies
Dorothy: “Uncle Angelo, you moved in with one suitcase. What do you need with more closets?”
Sophia: “I don't like to talk about my brother's personal life, but a man brings a woman home, how is he supposed to play a decent game of hide-and-go-seek?”
Uncle Angelo: “Under the table, behind the couch, Bambi was on to me like that.”

Zbornak Zingers
Stan: “Do you think this is all a coincidence? I mean, look - your uncle visits, my uncle dies. Your uncle needs a place to live, my uncle gives us a building. Don't you see? God wants us to be together, babe. It's almost Biblical.”
Dorothy: “And thus he smote your Uncle Morris, huh?”
Stan: “There's a whole school of thought that says he's a wrathful God.”
Dorothy: “Yeah, well that would explain your hair.”

Tales from the Old South
Blanche: “Believe me, Dorothy, I know what you're going through. I once had a relationship with a man I couldn't get rid of. Every time I turned around, there he was, pathetically underfoot. Long after I outgrew my need for him, he was there with flowers and candy, perfume. I mean I couldn't move without him following me like a puppy dog.”
Rose: “How'd you finally get rid of him?”
Blanche: “Monday came, and we both had to go back to work.”

Product Placement
Uncle Angelo: “I met a beautiful young Sicilian aerobics instructor. Gorgeous eyes, angelic mouth, and a behind that must have been made on a Saturday because even the good Lord himself would want to take a day off to admire it! I lost my heart and I opened my wallet, eh? Oh dear, the expensive gifts and fancy dinners and weekends in Mykonos, eh? I even wore one of those, uh, tiny Speedo swimsuits, shows all your gingerbread and everything. And she leaves me. What does a 6'7" American basketball player got that I don't?”
Blanche: “Well, Angelo, speaking in terms of the gingerbread alone-”
Dorothy: “Blanche!!”

Back in St. Olaf
Dorothy: “Even if it is for charity, I am not gonna stand up there and allow myself to be sold to the highest bidder like some Holstein cow at a livestock auction.”
Rose: “Dorothy, livestock don't get chauffeur-driven limousine rides to fancy four-star restaurants and the symphony afterwards. Except during St. Olaf Bicentennial Day.”

Rose: “On Stan's behalf, Charlie once made a lot of money in business with a partner who was also a lousy, no-good, underhanded, backstabbing worm.”
Dorothy: “Let me guess, Rose. Ivan Boesky-Vanderfloovenhooven- meistergarbengerbenfleckman.”
Rose: “That's the louse.”

Dorothy: “Uncle Angelo, what's wrong?”
Uncle Angelo “It's a long sad story; a story of love, a story of deception, a story of a fool.”
Rose: “You know the story of Elsie Holdenfelder?”
Dorothy: “Absolutely, Rose. That one's even more popular in Europe than it is here.”

Best of B.E.D.
Blanche: “Well, hey, who knew that sawed-off little gnome would outbid a Navy admiral? And a fire chief. And that jeweler who was a dead ringer for Mr. Richard Widmark.”
Dorothy: “Blanche, that was a year ago. How do you remember all this?”
Blanche: “I tagged 'em for migratory purposes.”

Stan: “Dorothy and I just inherited an apartment building. We're gonna be landlords together. I mean it's not a very big building, but she'll still clear a couple hundred bucks a month.”
Blanche: “Dorothy, this is wonderful. With that kind of money, we can hire a really good-lookin' gardener.”

Sweet, Single-Digit-IQ Rose
Dorothy: “It's all my fault for giving Stan so many chances. But I can't do this again. I mean, how many times can I make the same mistake? How many times can you bang your head against the wall before it starts to bleed?”
Rose: “Nine.”

Lesbian. Lesbian? LESBIAN??
Sophia: “It's a family curse, this obsession with women. The men in our family are weak. Why couldn't they all be more like Cousin Antony?”
Dorothy: “Ma, Cousin Antony had an obsession with men in cowboy hats who hung around Times Square.”

From Feud to Food
Dorothy: “Blanche, zabaglione is a traditional Italian dessert. It's my Uncle Angelo's favorite.”
Sophia: “Yeah, my brother, he's quite the scungiscor-ror-ror.”
Dorothy: “Even I don't know that one.”
Sophia: “That wasn't a word. My dentures slipped.”

Dorothy Zbornak is My Spirit Animal
Dorothy: “Stanley, what are you doing here?”
Stan: “I'm buying a date with the woman I love.”
Dorothy: “Oh, jeez. Not in front of people.”

What, We Can’t Learn From History?
Dorothy: “Rose, I am not going. It is degrading.”
Blanche: “Dorothy, come on, don't be a stick-in-the-mud. It's for the Children's Hospital. I mean if you can't degrade yourself for a bunch of sick kids, who can you degrade yourself for?”
Sophia: “Listen to this. Eleanor Roosevelt in a garter belt.”

Golden Quotes
Blanche: “We could chip in, say, 50 bucks and buy her the bull of the ball. Oh, but who do we know who knows a man?”
Rose: “Blanche, you know hundreds of men.”
Blanche: “I know. I just like to hear you say it.”

Blanche: “Nonsense, Dorothy. You can't pass up a chance to own real estate. It's been a lifesaver for me. You get a bunch of saps to pay your mortgage for you every month while your equity just rises higher and higher, while those poor suckers - What I meant was it's a great opportunity to make new friends.”

Blanche: “Angelo, you're even handsomer than you were your last visit.”
Uncle Angelo: “Thank you. I been plucking, eh? See? I got two eyebrows now. Everybody loves 'em.”
Uncle Angelo: “What am I gonna do?”
Sophia: “You're gonna trust in your family, because family is there when you're down, and family stops at nothing! - NOTHING - to help one of their own! Blanche, I want my brother Angelo to come here and live with us.”
Blanche: “Oh, I'm sorry, Sophia. There's just no room.”
Sophia: “Hey, I tried.”

Blanche: “What is wrong with you the woman’s been with lepahs!”

Dorothy: “Stanley, stop it. I am not going out with you. I would rather be bound and gagged and left on an anthill covered with honey.”
Creepy bidder: “400!”

Dorothy: “Thank you, Blanche. And thank you too, Rose.”
Rose: “What did I say?”
Dorothy: “Nothing. And I can't tell you how much I appreciate it.”

Blanche: “Angelo, great party the other night.”
Rose: “Yeah, you look great in a tux.”
Sophia: “It wasn't your kind of crowd, Pussycat.”
Dorothy: “That's funny. It's the same excuse you used when you didn't invite me to my Sweet 16.”
Uncle Angelo: “Now, that was a party.”

Sophia [seeing Stan on the floor]: “Let's move quick before the cops get here. You wipe for fingerprints, I'll get a shovel and a Hefty bag.”
Stan: “Sophia.”
Sophia: “Oh, great. It figures you couldn't finish the job. I'm gonna go get the toaster.”
Stan: “Ow! Ow! Sophia, I'm not dead.”
Sophia: “Not yet. Would you slow down? I'm an old woman!”

Uncle Angelo: “Dorothy, forgive me, but I gotta speak. Sometimes it's harder to close the door than to open a window.”
Dorothy: “Oh that's very wise, Uncle Angelo. Thank you.”
Uncle Angelo: “Actually, I was talking about the apartment, but I'll take wise.”

Critique:
It took six seasons but the writers really figured out how fun it is to play Dorothy and Stan off each other. The two actors had tremendous chemistry together. And they were both like a couple of redwoods. Sensing, perhaps, that they may have jumped the shark with the whole Cheeseman story line, they sort of reigned things in for this one. Even though the show was known for some progressive thoughts, ideas, and plots, how exactly does a “bachelorette auction” help their cause? It doesn’t really but at least it provides plenty of laughs. I mean who doesn’t want to picture Dorothy hang gliding high above the Florida Keys?? Moving on to the B story involving the return of Uncle Angelo who we haven’t seen since “My Brother, My Father” back in Season 3. He’s now more of a permanent fixture in Miami and will make several more appearances throughout the final season. It’s still weird that they never mention their sister Angela but I mean if Miles is really an accountant from Chicago, why wouldn’t Angelo really be Angela after a sex change and plastic surgery? But I digress. This episode is solid but probably not one that many fans lists among their favorites. The auction scene is probably the biggest laugh getter but otherwise it’s rather quiet affair on Richmond Street. Fun fact: The guy who bids 400 dollars for Dorothy after she describes being covered in honey on an ant hill is a cameo from the show’s stage manager. GRADE: B 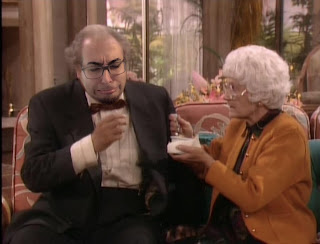