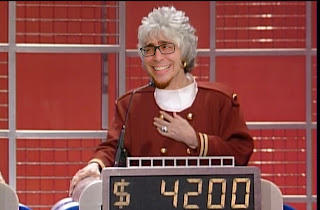 Synopsis: Dorothy applies to be on her favorite show Jeopardy! Meanwhile, Rose brings her newly adopted dog Jake to the hospital to cheer up elderly patients. Wowee!

Crazy Continuity
Rose says here her family had a cat named Scruffy. For someone who’s “never had cats cause she’s allergic” she’s certainly owned a lot of them.

Let’s Get Political
Rose: “Isn’t this dog amazing. He can find anything.”
Sophia: “Anything?? A viable Democrat for president! Go!”

That’s What She Said
Blanche: “Hey. I’ll show you mind if you show me yours.”

Take Me Out to the Ballgame, Stanley
Dorothy [dreaming]: “I won! I won! I won!”
Sophia: “She must be having the shot-put dream again.”

Animal Alert
Mr. Hubbard: “Grace loves animals, always has.
Rose: “Well everybody does Mr. Hubbard. That’s why ancient man, when he discovered the need for pets, turned to the animal kingdom.”
Mr. Hubbard: “I see.”
Mrs. Hubbard: “What a good boy. Yes you are!”
Rose: “Oh he reminds me of my old dog Rusty.”
Mr. Hubbard: “Rose, please, Grace isn’t feeling well. Can we skip the Rusty story today?”

Zbornak Zingers
Blanche [running after Jake]: “Hey! That slipper is from the Mamie Van Doren Collection!”
Dorothy: “Will you look at that. Man’s best friend… chasing man’s best friend.”


Insult Watch
Dorothy: “It’s been two days, why haven’t those Jeopardy people called??”
Blanche: “Dorothy, I’m surprised at this reaction. God knows you’ve had your share of experience sittin’ by a phone that doesn’t ring.”

Product Placement
Blanche, whispering: “Dorothy, where are the Ural Mountains?”
Dorothy: “Well well well, Blanche. A pot of lip gloss and a tube of Maybelline can’t help you now can they, Blanche?”

Back in St. Olaf
Rose: “Oh I love you already. In fact I haven’t felt this way about a dog since… since Rusty.”
Dorothy: “Oh God not the Rusty story again!”
Rose: “Charlie brought him home as a present after our first child was born.”
Blanche: “Oh I wish we had a doggy door so I could push your head through it.”
Rose: “Oh he was the best. Trustworthy, loyal, smart as a whip. Oh I thought Rusty was going to be with our family forever.”
Sophia: “Dorothy, do we have any candles? I’d like to drip some hot wax in my ears.”
Rose: “Then one horrible horrible night our house caught on fire. And it was Rusty who awkened everybody. It was Rusty who pulled us all to safety. He even dashed back in the burning building to rescue Scruffy our cat...”
All: “Whom he never really liked.”
Rose: “Yes sir, he was a real hero. Oh, if only he hadn’t gone back in for the TV. He was a dachshund for god’s sake, I mean what made him think he could carry a TV?”
Sophia: “You know how pig-headed the Germans are.”

Best of B.E.D.
Dorothy: “What are you talking about Blanche, you’ve never cared about Jeopardy.”
Blanche: “No but I do care for Alex Trebek. You see, I’ve never had a Canadian who wasn’t on skates.”
Dorothy: “I’m sorry, I didn’t know.”
Blanche: “I have this recurring fantasy: Take me Alex, take me now. I tell him. And he says to me, not uh uh, Blanche, in the form of a question.”

Sweet, Single-Digit-IQ Rose
Blanche: “We wanted to pick up your spirits Rose, so close your eyes. Close your eyes.”
[Dorothy brings in a dog, who promptly licks Rose’s face]
Rose: “Oh very funny Blanche, just give me the gift.”

What, We Can't Learn From History?
Sophia: “Yes Pussycat, Jeopardy is your favorite show.”
Dorothy: “I watch it every night.”
Blanche: “We know, we missed the entire Gulf War.”

From Feud to Food
Rose: “Uh, Gum for two hundred.”
Alex Trebek: “The answer is: Latin term for a colloidal carbohydrate found in certain trees and plants?”
Rose: “What is Juicy Fruit?”

Dorothy Zbornak is My Spirit Animal
Rose: “Wow, what a tough day, I really need somebody to talk to.”
Dorothy: “Gotta go!”

[phone rings]
Dorothy: “Hello? Yes this is she. Oh my God, it’s them, it’s Jeopardy! I did? Oh, this is wonderful. Yeah wonderful! What? Yes, yes she’s my, she’s my roommate. Oh that is fabulous news too. Oh sure, sure I’ll be happy to tell her. Blanche, YOU FLUNKED.”

Reel References
Alex Trebek: “Loretta Young played an innocent milkmaid in this Oscar-winning 1947 film. Charlie?”
Charlie: “What is The Farmer’s Daughter?”
Alex Trebek: “You are right.”
Charlie: “I thought it was a different kind of movie.”

The Boob Tube
Dorothy: “Everybody, listen to this. Alex Trebek and the Jeopardy people are auditioning contestants in Miami. They’re coming here. Jeopardy! Oh! It’s my favorite show! Wowee!”

Golden Quotes
Rose: “It’s not easy spending that much time with people who are old and sick a frail.”
Sophia: “Oh that reminds me, I’ve got Mah Jong tomorrow.”

Rose: “I’m sorry I won’t be able to quiz you, Jake and I are due at the Hubbards. But I have a book here that should help you prepare you for your Jeopardy tryout.”
Dorothy: “The St. Olaf High School Yearbook? No. Thanks anyway, Rose. I don’t think I’ll be needing it.”
Rose: “Well ok, Miss Know-It-All, but if Alex Trebek asks you what years Ulf Horvald was on the student council back-to-back, don’t come crying to me.”
Dorothy: “1946 and 47. I intend to win this.”

Sophia: “You’re being too intense here. Don’t you remember that spelling bee in second grade? You beat all the kids so bad they wouldn’t invite you to any birthday parties.”
Dorothy: “Ma, that had nothing to do with the spelling bee. The kids were just jealous of me. Jealous. J – E – A – L-”
Sophia: “All right, all right!”
Dorothy: “Besides Ma, all that studying paid off.”
Sophia: “Oh yeah, paid off. You got knocked off in high school.”
Dorothy: “Ma, I am 60 years old, why do you have to bring this up every day of my life?”
Sophia: “So it won’t happen again.”

Dorothy: “Four-time champion? How? This woman is an idiot.”
Johnny Gilbert: “Oh really? She didn’t get knocked up in high school.”

Rose: “Alex, as you know, I was raised in a rural community. Uh, I’m proud to take Cows for three hundred.”

Alex Trebek: “So let’s move on to double Jeopardy! And the categories for this more difficult round of play are: structural engineering, photometry, Roman law, systems of nonuniform motion, electromagnetic phenomena, and finally, gum.”

Alex Trebek: “Today, our final Jeopardy category is this: US History.”
Dorothy: “MY MAJOR IN COLLEGE!”

Dorothy: “Mr. Griffin please. You are the most beloved man in America. You are bright, you are charming, you are the anti-Trump.”
Alex Trebek: “Excuse me Dorothy, but Mr. Griffin really hates it when people kiss up to him. Isn’t that right your excellency?”

Moderator: “I afraid this is the point where Alex would politely tell you to shut up.”
Dorothy: “He would and he should. I mean after all he is the moderator and the function-”
Moderator: “Shut up.”
Reginald: “What is Pentecost”
Moderator: “I’m sorry.”
Dorothy: “What is Pentateuch?!
Moderator: “Correct.”
Dorothy: “Pentecost please! Somebody stop the bleeding.”
Sophia: “Pussycat, leave a few scraps for the other two nudnicks. You never know when I might need a good neurosurgeon.”
Dorothy: “These people are not nudnicks. They are brilliant, accomplished scientists. And I’m wiping the floor with them.”

Dorothy: “He said America wouldn’t root for me.”
Sophia: “Sweetheart, he’s wrong. How could America not root for you? You’re what this country’s all about. The daughter of immigrants who became the first member of her family to go to college, you made something of yourself.”
Dorothy: “Thanks Ma.”
Sophia: “Until you got knocked up in a backseat by a nobody. People didn’t want you at their birthday parties and they don’t want you in their living rooms.”
Dorothy: “I thought you said this was supposed to make me feel better?”
Sophia: “We did that, now we’re up to the part where I feel better. Come on, let’s go home. Lifesaver?”
Dorothy: “Ah go to hell, Ma.”


Critique: It’s funny how they made Dorothy so much more “book-smart” and nerdy in the last couple seasons. Way back in Season 3 she loved that ridiculous show “Grab That Dough” but now her favorite show is apparently “Jeopardy!” and even though she says she watches it every night, we’ve never actually seen her watch it or even mention it. Eh that doesn’t really matter because it leads us to one of Season 7’s all time greatest scenes: Dorothy’s Jeopardy! dream that features cameos from Alex Trebek and Mr. Anti-Trump himself Merv Griffin. I truly love how us Anti-Trump people have this moment of solidarity from the almighty Dorothy Zbornak. Rose’s storyline about Jake is a cute if uneventful sequence of events (save for that, you know, death) and is yet another attempt by the animal-loving cast to get another perfectly trained, genius dog onto the show. It wouldn't be a 90s sitcom without one. How Rose could get a newly acquired shelter dog a job at a hospital without any training is beyond me. But he made Grace happy so I guess that counts for something. And how does Rose just give away her pets to people all the time? Oh your wife just died, here have my dog! But I digress. Back to the more important task at hand: Trying to figure out what Jeopardy! moment is best. While the dream sequence is a stand-out I am a big fan of the egocentric, substitute teacher Dorothy having fun wiping the floor with her professor and doctor competitors. Sure the Jeopardy guy says that he doesn’t think America would root for Dorothy, but as fans of this brilliant show, we root for her every single time Bea Arthur shows up onscreen. GRADE: A-