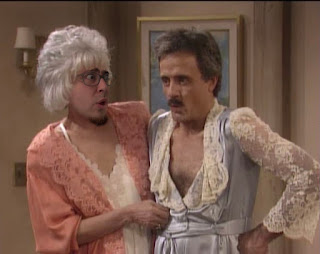 Synopsis: Dorothy finds herself dating a Beatlemania musician; meanwhile, Blanche freaks out about a guy she’s dating who won’t make a move.

Dorothy: “What can you say about a show by an ex-fake-Beatle that began with I've Got to Be Me and ended with Everybody Was Kung Fu Fighting? What the hell was that man doing up there?”
Rose: “Was it as bad as that?”
Dorothy: “Had it been a fight, they would've stopped it.”
Rose: “Did he do any of his own material?”
Dorothy: “Oh, he did his own material, all right. A Tribute to Dorothy. ‘Dot, Dot, What a Girl I Got.’ The last words I heard as I sprinted to my car were, ‘When we shower together, we don't have to turn on hot.’ I guess I just feel a little silly right now. Could I have transferred my love for The Beatles to this one man who plays a Beatle? Could I have been so shallow as to have fallen in love with a persona, and-and not the person? Oh Ma, I need support now. Please, honey, no jokes, no I-told-you-so's.”
Sophia: “Of course not, Dot. ‘Dot, I've gotta trot.’ Hey, listen to me. I'm a Beatle.”

That’s What She Said
Blanche: “Oh, Sophia, do you know where any batteries are?”
Sophia: “Oh you make me sick.”

Lewd Ladies
Rose: “Morning, Blanche. How was your date last night?”
Blanche”“Ha! How was my date last night? I woke up alone. That's how my date was last night. He didn't open my car door. He did not escort me into the restaurant, didn't pull out my chair, and then, when the check came, he made me pay half the bill! What did I ever do to deserve that?”
Rose: “Sounds to me like you put out before dinner again.”

Back in St. Olaf
Blanche: “Listen, girls, don't one of you have a story about some man who wouldn't sleep with you?”
Dorothy: “Golly, I sure don't.”
Blanche: “Stop it.”
Rose: “I have a story, a story that'll end all stories.”
Dorothy: “Oh, Rose, please.
Blanche: “All right, but, honey, make it fast. Ten words or less.”
Rose: “All right, but your curiosity is gonna be so piqued, you'll beg for more.”
Blanche: “Just spit it out, Rose. When was it a man refused to sleep with you?”
Rose: “The time I was radioactive.”
Blanche: “How 'bout you, Sophia?”
Sophia: “Well, there was that time Warren Beatty passed up the chance to sleep with me.”
Blanche: “So, Rose, you say you were radioactive?”

Dorothy Zbornak is My Spirit Animal
Dorothy: “Look, Blanche, are you gonna do this or not? Because my date is on his way over, and I just won a ticket on the radio to a dinner theater Beatlemania. Shut up, Ma.”
Rose: “Beatlemania? You're giving up a date for Beatlemania??”
Dorothy: “Oh, Rose, the Beatles were the first and only rock-and-roll group that I ever really loved. When they came to Shea Stadium, I managed to get a ticket, but one of my kids came down with the flu. It was one of those times when you have to pretend that you love your kids more than something you really wanna do.”

The Boob Tube
Blanche, playing with the remote: “Huh. I wonder how this thing works. Oh, just like The Jetsons. Now, let's just sit ourselves down here and have a little bubbly. You know what goes great with champagne? Me.”

Golden Quotes
Jerry: “I'm supposed to meet a Dorothy Zbornak at this address at 7:30 for a dinner date. So which one of you really is Dorothy Zbornak?”
Blanche: “I am Dorothy's best friend, Blanche. I'm filling in for her because she's dead.”

Dorothy: “Ma, Don plays George in Beatlemania.”
Don: “And Paul when Ernie's sick.”
Sophia: “Well, good for you. Dorothy? What the hell are you doing with this loser?”
Dorothy: “Ma, he is not a loser. He's a wonderful and gifted musician. I know this sounds odd, but when he was on stage, our eyes met and it was.. well, it was, it was kismet. Suddenly, we were spiritually-connected soul mates.”
Don: “And then you threw your underwear at me, didn't you, love?”

Sophia: “I can't believe you. Are you actually standing here, telling your own mother you had sex with a complete stranger?”
Dorothy: “No, but it was an incredible simulation.”

Dorothy: “Girls, I have great news. I finally convinced Don to quit Beatlemania. Isn't that wonderful?”
Sophia: “Dorothy, you're 60 years old and breaking up fake rock-and-roll bands. I want you to think about that.”
Dorothy: “Ma, will you stop it? Thanks to me, Don can now perform his own songs. Do you know what that makes me?”
Sophia: “Yoko Zbornak?”
Dorothy: “His muse. His muse. Well, actually, his old lady.”
Sophia: “Don't you think I know what this is all about? It's about that British Invasion that's been going on in your bedroom.”

Rose: “What are you looking for, Blanche?”
Blanche: “Batteries. You know, I bought one of those subliminal self-esteem tapes, but my batteries are dead.”
Rose: “Oh, you don't need those trendy tapes, Blanche. You know what I do when I need a shot of self-esteem?”
Blanche: “Yeah, you put on that dopey ‘It's okay to be me’ sweatshirt, go lock yourself in the bathroom, and then, like a moron, kiss yourself silly in the mirror.”
Rose: “And I guess I'll be back in there again tonight.”

Dorothy: “I am home, dear, dear friends. What a glorious night!”
Blanche: “Dorothy Zbornak, I just hate you. There you go again, rubbing it in, how I'm having a sex drought and you're having a bumper crop.”
Dorothy: “And I'm expecting more rain.”

Rose: “Blanche, think about it. Would it really be so bad if you and Jerry just had a platonic relationship?”
Blanche: “Rose, I already have friends I don't have sex with: You guys.”

Jerry: “My God, Blanche, this bed is vibrating.”
Blanche:“It better be at these prices.”

Blanche: “Wait, Jerry. Wait. There's been a mistake. I had no idea what kind of place this was, I swear.”
Motel worker: “Ms. Devereaux, nice to see you again.”

Blanche: “I am nothing but a cheap tawdry slut.”
Rose: “Don’t tell me, is it Blanche??”

Don: “Hello love.”
Rose: “Dorothy isn't here, Don.”
Don: “Well, actually, I was looking for you. I was wondering if you might want to have a spot of dinner with me.”
Rose: “Oh, I don't think so. I have a boyfriend.”
Don: “Oh. Did I mention Ernie's sick, and I'll be playing Paul this week?”
Rose: “Well, maybe just some coffee.”

Critique:
So, if Don plays Paul when Ernie’s sick, then who the hell plays George? But I digress. More importantly, read this line of dialogue out-loud: “The time I was radioactive.” I have so many questions. This is the one St. Olaf story that actually sounds remotely interesting and yet we never get to hear it. Tragedy, such a tragedy. Instead we get Dorothy singing “She Loves You Yeah Yeah Yeah” twice, (thank God not thrice) because it was probably all the producers could afford at the time. I really think this Beatlemania plotline existed only so the writers could make that Yoko Zbornak joke, one of the episode’s funniest moments. So yeah, for the wacky 7th season does this actually feels like a more grounded episode? Who else is impressed that Dorothy was able to get her underwear off in the middle of a dinner theater without anyone noticing? I don’t think anyone really lists this episode as being one of their go-to watches but it has some decently funny moments. Blanche’s storyline about dating a man who makes her question her entire sexual existence is fine if underwhelming. The scene at that goofy sex motel is certainly a highlight including the sight of Blanche lunging herself at Jerry to that tribal music. But of course the most memorable moment of Dorothy’s Beatlemania story is of course “Dot Dot what a girl I got.” And of course Sophia has gotta trot. The less said about the episode’s dialed up to 11 corny ending the better. GRADE: B+