The Days and Nights of Sophia Petrillo S4E2 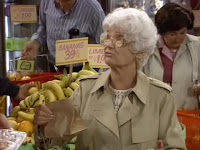 Synopsis: Sophia goes to the market to buy a nectarine while the other three girls have a lazy day sitting on their asses.

Let’s Get Political
Dorothy: “But the most amazing thing about Grandma was that in 1952 she decided to go into politics. She felt it was her personal responsibility to elect Adlai Stevenson president. Well, she didn't care for Eisenhower because, you know, he claimed to have liberated Italy, and she said Italy was liberated enough. Already too many people eating meat on Friday, and wearing condoms on Saturday.”

Crazy Continuity
Blanche mentions that she was arrested in Chattanooga several times... but in "Ladies of the Evening" she says that she's never been in jail.


Dorothy, Blanche, and Sophia watch a TV show with theme music that sounds suspiciously like the theme from “Grab That Dough!”

That’s What She Said
Sophia: “I'm having the usual as soon as the sausage guy comes.”

Lewd Ladies
Rose: “Well, that could be fun too, if we divide into teams and grease our hands.”
Blanche: “I got arrested for that once at a party in Chattanooga.”
From Feud to Food
Rose: “You know it's a shame. We didn't accomplish anything today.”
Dorothy: “Of course we did. We found out in a pinch fruit cocktail is not bad on a bagel.”

Zbornak Zingers
Blanche: “By the way, did you girls know that the size of a man's ears is directly proportionate to the size of his other bodily organs?”
Rose: “What do you mean?”
Dorothy: “He had a big, floppy pancreas Rose.”

Tales from the Old South
Blanche: “Well, it's true. Now I learned that during my sorority years when I was dating Mr. Preston Bougainvillea. Lord, the teasing that boy put up with.”
Rose: “Because of his name.”
Blanche: “No, because of his ears. He had these long, floppy ears. Kind of like a basset hound. When he came to pick me up for our blind date I couldn't believe it. He jumped out of the car and he ran up the walk and bounded up onto the front porch, and I remember thinking, ‘He's gonna trip on those ears.’ But he didn't. So there he stood before me introducing himself and, I don't know, I was still so stunned, I just kind of half-muttered a ‘Howdy-do’ and he said, ‘I beg your pardon? I didn't hear you.’ Well, I don't know what came over me, but I just blurted out, ‘Didn't hear me? I think you could pick up Radio Free Europe with those ears!’ And you know what he did? He laughed. Well, right then and there I started growing very fond of Mr. Preston Bougainvillea, and over the next several months we saw quite a lot of each other.”

Sassy Sophia
Supermarket worker: “This nectarine is beautiful. I never saw a more perfect piece of fruit.”
Sophia: “No? Then try kissing my behind. It's a real peach!”

Back in St. Olaf
Rose: “I just hate the idea of wasting time, I always have, ever since what happened to my neighbor in St. Olaf… It was back in 1955 and we had just moved into our first house, right next door to Pigpen Johannsen. That wasn't his real name. That was a nickname.”
Blanche: “Pigpen?”
Rose: “No, Johannsen. Anyway, Pigpen had just turned 80 and the town bylaws made him leave his job teaching drivers training at the high school… Anyway, without a job Pigpen started feeling useless, so the town fathers thought they'd give him a new job. Putting up the "Welcome to St. Olaf" sign out on Miller's Lane. That same year on Founders' Day the governor was coming, and Pigpen forgot to put up the sign. And the governor drove straight through town without ever realizing he was in St. Olaf.”
Dorothy: “I would have thought the glazed look on everyone's face would have tipped him off.”
Blanche: “So the point is Pigpen ruined Founders' Day all because he was wasting time.”
Rose: “That's right, and the town fathers took down his picture. It had always hung in the St. Olaf auto shop, right next to Andy Granatelli. My mother used to date him. You know what he has under that trench coat?”
Dorothy: “A wrench?”
Rose: “That's what Mother called it.”

Sweet, Single-Digit-IQ Rose
Rose:, about Dorothy's grandmother: “Whatever happened to her?”
Dorothy: “She colonized life on Venus. Rose, she was 94 when I was six. She died, you idiot.”
Rose: “How did she die?”
Dorothy: “You know, we're not sure. One night she left in her wheelchair and she never came back. The next day the neighborhood kids had a go-kart with two really big back wheels.”

Neiman Marcus Marker: 6
Sophia: “This is too big for NOPRL. This is all the way up to OREP.”
Supermarket manager: “OREP?”
Sophia: “Organization of Retired and Elderly People. Sophia Petrillo, Executive Director and leader of the '87 march on Neiman Marcus.”

Golden Quotes
What do you wanna do instead?
Blanche: “I know. Let's rent an adult video, drink mimosas, and French-kiss the pillows.”
Dorothy: “I don't think so, Blanche.”

Blanche: “I once got arrested for that in Chattanooga, too.”
Dorothy: “Blanche, let me ask you a question. Are you allowed to go back to Chattanooga?”
Blanche: “Are you kidding? The sheriff still writes.”

Critique: Is it me or is Sophia kind of a dick in this episode? She's doing lots of good things, but she makes her friend pay for her nectarine and her jazz friend has to pay for lunch because she has high blood pressure. But I digress. “The Days and Nights of Sophia Petrillo” is a solid episode and is finally the episode that gives Sophia more to do than make snide comments. And it's the other three who have nothing to do but sit around and eat pizza and cheesecake. The episode sort of reminds me of those vignette-like “flashback” episodes as we follow Sophia to the market to buy a nectarine, to the boardwalk where she apparently conducts an all-female old lady jazz band, and to the hospital where she volunteers as a Sunshine Lady and befriends a young buy assumed to be dying of AIDS. How Dorothy could have no clue she's doing any of this is beyond me. And funnily enough Sophia is never shown doing any of this ever again. At least there are some great lines especially Blanche's constant references to her arrests in Chattanooga. This is a solid episode, if at times a bit overly corny, but gets extra points for the pancreas line and the drink mimosas line. GRADE: B+
Posted by Chris at 2:42 PM