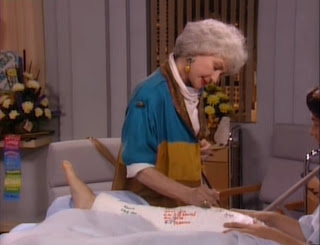 Synopsis: Dorothy courts controversy when she fails a star football player in the high school English class she’s teaching; Rose is molested by her dentist.

80s Flashback
Coach Odlivak: “I'll tell you what. I'll sweeten the pot. You let Kevin play this weekend, and I'll take you out Saturday night.”
Dorothy: “You haven't read ‘The Art of the Deal,’ have you, Coach?”

Take Me Out to the Ballgame, Stanley
Dorothy: “I'm sorry about your knee. You know, you wouldn't have been blindsided if you'd stayed in the pocket.”
Kevin: “You know football?”
Dorothy: “I know everything.”

Lewd Ladies
[Sophia enters with tea]
Blanche: “Oh, Sophia. Thank you, honey. How perfectly lovely.”
Sophia: “Well, I was boiling water anyway to shrink the cyst on my backside. I figured, What the hell? I'll throw in a tea bag and make myself a hero.”

Zbornak Zingers
Dorothy: “Look, it's not that I'm lazy, Ms. Zbornak. I'm just really busy with ball. I wanted to read The Tale of Two Cities, but I didn't have the time.”
Dorothy: “That was my fault, Kevin. For interrupting the high school experience with a book.”

Product Placement
Dorothy: “Oh, a student pays attention, works hard, gets good grades. Does that make him a geek?”
Kevin: “Uh no, that makes him a dork. A geek is more like, you know, somebody with no friends, stays home every Saturday night, nose always buried in a book.”
Dorothy [to Sophia]: “One word out of you and I cut off your supply of Metamucil.”

Sassy Sophia
Dorothy: “Oh, Blanche, you did a pretty good job focusing this for Rose. And for me. I have to admit, you would have made a very good psychologist.”
Sophia: “Great idea, Pussycat. Give Blanche an office with a couch and a license to charge by the hour.”

Back in St. Olaf
Rose: “What if I were wrong? The last time I had courage, I confronted Lukan Ulfnooner, St.
Olaf's moodiest plastic surgeon… Anyway, Doctor Ulfnooner did some work on my mom. And do you know who she came out looking like? Raymond Massey!”
Dorothy: “Rose, that's terrible.”
Rose: “Well that's what I thought when I accused him of malpractice and ruined his business. Unfortunately, little did I know…”
Blanche: “Know what, Rose?”
Rose: “That was the look she was going for.”

Best of B.E.D.
Blanche: “Dorothy, I don't think you realize the significance of football in the South. I've had men break dates with me to go to football games.”

Sweet, Single-Digit-IQ Rose
Rose: “I wish men would have breasts just for one day. Then they'd know what it's like to be judged by some physical trait. I mean, just because I'm built like this, you wouldn't believe how many people think I'm dumb.”
Sophia: “Rose, you're too hard on yourself. I know people who think you're dumb over the phone.”

Dorothy Zbornak is My Spirit Animal
Dorothy: “I see some people have already signed your cast.”
Kevin: “Uh, yeah. Some of the guys from the team. Uh, are you signing it?”
Dorothy: “Correcting it. There is no K in victory. Oh, yeah, and we'll just change this to: ‘Ms. Zbornak eats shii-ta-ke mushrooms.’”

Literary Intelligentsia
Sophia: “Dorothy, why don't you pass the kid so he can play? I doubt if The Canterbury Tales is gonna come up in a huddle.”
Blanche: “I agree, Dorothy. Saturday's game is a big one. And speaking as a former cheerleader and ex-bad girl in a health film, I can tell you the importance of school-sanctioned extracurricular activities.”

Golden Quotes
Dorothy: “I really don't get it. Am I the only one who thinks diagramming sentences is fun?”
Sophia: “You talk like this on dates, don't you?”

Sophia: “Doorbell! Doorbell!”
Dorothy: “Ma, what is the matter with you? Can't you answer the door??”
Sophia: “My butt's asleep, and you know, I'm kinda gettin' into it.”

Blanche: “When I submit to a man's advances, it is with my consent. A woman has the option to say no. Honey, you weren't given that option. You were given nitrous oxide!”
Sophia: “By the way, Blanche, when did you ever say no?”
Blanche: “Did I say there was going to be a question and answer period after I spoke?”

Father O’Mara: “Blanche Devereaux? I've heard quite a bit about you.”
Blanche: “All good, I hope.”
Father O’Mara: “I'm sorry, I can't reveal things learned in confession. But it's nice to match the name up with a face.”

Sophia: “I can't believe I have a daughter who threw a priest out the door.”
Dorothy: “Ma, you have relatives who threw priests out of windows.”
Sophia: “That was business.”

Blanche: “Rose, you obviously had a very traumatic childhood. I need to hear your whole life. I want you to start at the beginning and tell me your first memory.”
Dorothy: “Ma, I'm sorry. I didn't want your last days to be like this.”

Critique:
It still fascinates me how truly obsessed Sophia is with having a big screen TV. This is what her fourth or fifth time mentioning wanting a big screen TV. Imagine if Sophia were around today, she’d be like 4K all the way! But I digress. What a fascinatingly ethics-themed episode this is. Dorothy is in an awkward position of failing a football player only to be threatened by the coach, a priest, and whoever left the dead fish on her door. Meanwhile, Rose is being felt up by her dentist. And with the whole #metoo movement going on you realize how embedded into our society harassment of all kinds truly is. Like the best GG episodes that dealt with serious topics, it’s still disturbingly relevant today. But let’s not be a Debbie Downer, this episode still has it’s moments. Who else wants to see Sophia sitting in a pot of tea? Oh, I’m the only one? Moving on. This episode is also filled with recognizable faces. Rose’s dentist is Col. Sandurz from “Spaceballs.” And Kevin is played by Christopher Daniel Barnes who voiced Prince Eric in “The Little Mermaid” and went on to star as Greg Brady in The Brady Bunch movies. Groovy. GRADE: B 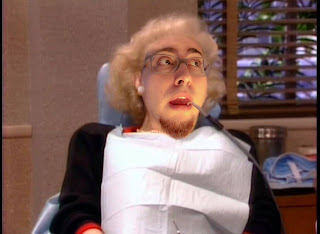