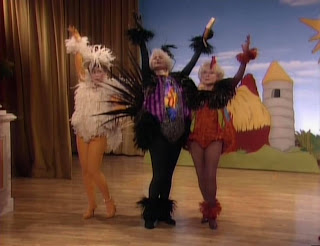 Synopsis: It’s Spring Break in Miami and Dorothy is producing a school play, but when the kids get sick she recasts it with her roommates… meanwhile Blanche deals with an angry ex who publishes her obituary. Sophia plays a chess by mail game with a friend from Sicily.


Musical Moments
Dorothy: “Well, I did once do a production of ‘Showboat’ in high school, and everyone said I was pretty good.”
Sophia: “No one can sing ‘Old Man River’ like my Dorothy.”
Frank: “Then you're saying you'll do it?”
Dorothy: “Well, it is my production, and as they say, ‘The show must go on.’”
Sophia: “Aw, Pussycat. It'll be like the old days. Come on, just one more time.”
Dorothy: “Get a little drunk and you land in ja-aaaaaaaaail... I still got it!”

Rose, as Henny Penny: “A piece of blue sky just fell on my head/The wherefore and why is best left unsaid/But I have a hunch and it's appalling/That like it or not, the sky is falling!”

Blanche, as Goosey Loosey: “A piece of up there just landed down here/You better beware, the message is clear/
Rose & Blanche: “Though millions may find the prospect galling/It's run for your life, the sky is falling!”

Dorothy, as Turkey Lurkey: “A piece of blue sky just did what they said/Don't stand there and sigh/Get under the bed
Rose, Blanche, & Dorothy: “Don't stop to complain, it's no good grumbling/‘Cause this isn't rain, the sky is crumbling”

All: “A piece of blue sky Just fell on her head/The wherefore and why are best left unsaid/But we have a hunch, and it's appalling/That like it or not, the sky is falling”
Rose: “Help! Disaster is near”
Blanche: “Help! We're tremblin' with fear”
Dorothy: “Help. The outlook is drear”
All: “We're dreadin' Armageddon may disrupt our career/And though he may refuse the news we bring/We must fly and try to warn the king”

Frank, as Foxy Loxy: “A piece of good luck just fell in my lap/Three strangers who cluck, well, it's their mishap/These friends who dropped in don't look suspicious/But check out my grin, they look delicious/To me these feathered fools are so much meat I and mine shall dine/Bon appetite”

Animal Alert
Rose: “All right, all right, I'll do it. And not just for the kids. I just feel it's time I gave something back to the chicken community. After all, a chicken once saved my life.”
Blanche: “They are the stupidest birds.”

Picture It
Dorothy: “Here's a letter for you from Palermo.”
Sophia: “Oh, it's the latest chess move from my old rival Serafina Gambrotsi.”
Dorothy: “Ah, how long has this chess game by mail been going on? What, it must be ten years now, huh?”
Sophia: “And it's going to keep on going until I beat Serafina at something.”
Dorothy: “What are you talking about?”
Sophia: “Picture it. Sicily, 1920. Serafina and I were both crazy about Marco the Goat Boy. In appearance, an Adonis. In behavior, horny as a toad. Little did I know he had a thing for hairy fat girls. If I were fatter and hairier, Dorothy, Marco the Goat Boy could've been your father.”
Dorothy: “I think we all grieve. Ma, that was 70 years ago. I was sure you'd forgotten.”
Sophia: “I forget nothing. So, any mail?”

Sophia [narrating]: “Once upon a time on a beautiful spring day, Henny Penny was waking up from a nap under an oak tree when an acorn fell from the tree and hit her on the head. Funny, when I was a little girl in Sicily and they told this story, it was a safe that fell on her head.”

Insult Watch
Sophia: “You'd be perfect. Turkey Lurkey was your nickname in high school.”
Dorothy: “Ma, it was not.”
Sophia: “Really? That's what they called you at the PTA.”

Product Placement
Blanche: “Well, they printed the retraction.”
Dorothy: “Let me see it… wait, I can't find it.”
Blanche: “Of course you can't. It's way down at the bottom in itty-bitty type.”
Dorothy: “Ah. Our ad in yesterday's paper should have read 'Sit Well Cortisone Salve Prevents Hemorrhoids, ' not 'Presents Hemorrhoids.’”
Blanche: “Below that.”

Back in St. Olaf
Dorothy: “How would you like to play Henny Penny?”
Rose: “Well, I have enjoyed playing a hen in the past.”
Dorothy: “Fill us in. Parade, honeymoon or religious ceremony?”
Rose: “Theater. The St. Olaf Masquers' production of Hamlet.”
Dorothy: “I don't right off recall a hen in Hamlet.”
Rose: “Oh we set the play in a barnyard. Luckily the symphony was out of town at the time.”

Blanche: “As Big Daddy used to say, ‘I'm feeling lower than the rent on a burnin' building.’”
Rose: “That's funny. I used to live in a burning building. And it was cheap. It was Charlie's and my first house. Well, scoff if you must, but it was warm and toasty. I'll never forget Charlie throwing me over his shoulder and dashing across the threshold. Oh it was a beautiful place. Three bedrooms, two baths. Then two bedrooms and one bath. Eventually we outgrew the place.”

Rose: “All I'm trying to say is we had fairy tales in St. Olaf that weren't violent, and they had positive role models. Like ‘Gus and the Recliner;’ ‘Gunilla Gets a Catalog;’ and ‘Ilsa, the Girl Who Could Make Bad Food Good.’”

Best of B.E.D.
Blanche: “Oh my gosh. It's only one week till spring break? And I have so much to do. I have to get new T-shirts for the wet T-shirt contest...”

Blanche: “Well, Frank Nann. I haven't seen you since that weekend in Pensacola.”
Frank: “Goosey Loosey!”
Blanche: “That's right. We did have fun, Squeezy Wheezy.”

Sweet, Single-Digit-IQ Rose
Frank: “Where are we going to find an adult with the childlike naivety to play Henny Penny?”
Rose: “Oh, you're not gonna believe it. I just saw a cloud that looked exactly like a cotton ball.”
Frank: “My God, she is Henny Penny.”

Literary Intelligentsia
Dorothy: “We're doing Henny Penny. You know, ‘Help, help! The sky is falling.’”
Blanche: “Oh, that was never one of my favorites. There's no prince in it. I like a fairy tale with a nice prince in it. A handsome prince with a big ol' codpiece and deep dark eyes and powerful thighs and muscles rippling beneath his tunic.”
Dorothy: “Blanche, you could get aroused by Humpty Dumpty.”
Blanche: “Are you kiddin'? ‘All the king's horses and all the king's men.’ Handsome men with deep dark eyes and powerful thighs and muscles and big ol' codpieces.”
Dorothy: “Blanche, how do you make it through an omelet?”

Dorothy: “Fairy tales just show kids how complicated life can be, and it does it on their terms.”
Blanche: “I remember when I first read Snow White and the Seven Dwarfs, it had a profound influence on me. Seven lonely men, livin' in the woods, needin' a woman. All of 'em with Napoleon complexes, somethin' to prove.”
Dorothy: “And jobs, Blanche. They all had jobs.”
Blanche: “In a diamond mine.”

Golden Quotes
Dorothy: “I'm talking about my school's project to get kids to read during spring vacation. We're putting on a series of plays based on favorite children's stories. And guess what. I have just been made producer of the first-grade production.”
Blanche: “This is all you have, Dorothy, so I'm going to be happy for you.”

Dorothy: “Rose, you mean you didn't even look at the end of the play until today?”
Rose: “If there's one thing I remember about my wedding night, it's Charlie telling me it's impolite to peek.”

Dorothy: “Rose, the play isn't real. It's a fairy tale. Not all stories end happily, and children have to learn that.”
Rose: “You call yourself a teacher? It's people like you who are responsible for all the evil on this planet.”
Dorothy: “I guess I had that coming.”

Delivery man: “Flowers for Blanche Deverucks.”
Dorothy: “No, that's Devereaux. It's only pronounced Deverucks in limericks.”

Sophia [reading from Mel’s card to Blanche]: “P.S. Sorry I missed your birthday. Happy 68th.”
Blanche: “It doesn't say that.”
Sophia: “I know. I made that part up.”
Dorothy: “Ma, why are you always trying to aggravate everyone?”
Sophia: “To relax.”

Sophia [narrating]: “And off she went. On her way, Henny came upon Goosey Loosey, one of the most popular birds in the barnyard.”
Blanche: “THE most popular!”
Sophia: “And the eighth graders are seeing a play today about how to be that popular... safely.”

Rose: “Fine. But I just want you all to know there are monsters living under all your beds!”

Sophia: “Uh-oh. I don't think Serafina's a worthy opponent for me anymore.”
Rose: “Why not, Sophia?”
Sophia: “I'm afraid she's losing it. I just got her next chess move. She bid four spades.”

Critique:
First of all, what the hell kind of name is Chugger Dietz? Who names their kid that? I just assume it’s a college nickname from his frat brothers and it stuck. But I digress. Two thirds of this episode is just funny fodder before they get the girls into ridiculous outfits. As Dorothy would say, “I can dig it.” The Henny Penny episode is either a love it or hate it affair. I fall in line with the former as I’ve always quite enjoyed watching the crazy bird antics of the film’s ridiculously stupid school play (but I always fast-forwarded past that Foxy Loxy drip). But who am I to judge because the kids loved the play: “It was good. Especially Turkey Lurkey.” Raves. I mean I do love Sophia breaking the fourth wall and making inappropriate STD jokes in front of first graders. This finale is the epitome of the silliness that is the sixth season of The Golden Girls. At this point the show was beyond really clever writing and story lines; the audience just wanted to see the ladies do silly stuff, which this episode delivers in spades. The four lead characters had been perfectly fleshed out and they were obviously comfortable in their roles. Except for Bea Arthur who wanted out at this point. I image she went something like this: “I am goddam Bea Arthur! And you have me parading around in a turkey outfit?? Eat me! Next season is my last!” I mean Dorothy was basically a punching bag for 7 years though Bea handled it wonderfully. Speaking of which, is anyone else fascinated with the various nicknames that Dorothy collected as a young person? Moose in elementary school and Turkey Lurkey in high school. I wonder what they called her in middle school? Kids and parents can be so cruel. GRADE: A-