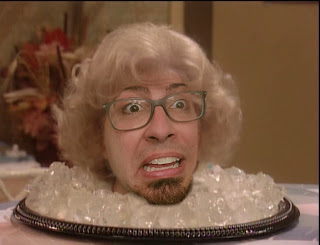 Synopsis: Rose is being prepared for heart surgery but the hospital staff won’t allow Blanche, Dorothy, and Sophia to see her. Rose’s daughter Kirsten joins them at the hospital and is in a MOOD.

Sophia: “By the way, Dorothy, I sold that video of you falling into the gorilla pit to America's Funniest Home Videos.”

Dorothy: “Honey, we made a pact a few years ago that if anything happened to any one of us, the other three would take care of her. Sort of an extra insurance policy.”

I’d like to think this is in reference to the “Sophia’s Choice” episode where they all promised to take care of each other and go to the nursing home together.

Sophia: “And then the strangest thing happened. They put the baby's last name in the window and it was Rheingold.”

Blanche: “What was so strange about that?”

Sophia: “Rheingold. Rheingold was Sal's favorite beer. He was always walkin' around the apartment singing that damn jingle, ‘My beer is Rheingold the dry beer.’”

Blanche: “Think of Rheingold whenever you buy beer”

Dorothy: “It's not bitter, not sweet”

BOTH: “It's the extra dry treat/Won't you try extra dry Rheingold beer?”

Kirsten: “Well, I'm glad to see my mother's illness hasn't upset you all.”

Blanche: “You remember the time she took that playwriting course?”

Dorothy: “Oh. She turned Mary Had a Little Lamb into a musical.”

Sophia: “Don't laugh. Blanche was terrific as Mary. And I made a pretty good lamb, even though my knees were killing me for weeks. And Dorothy's performance stole the show.”

Dorothy: “Come on, I mean how could you not with material like that? I am the wolf Boom, boom/The big bad wolf/Boom, boom/Hello-”

Kirsten: “I'm really glad you all are having such a good time.”

Dorothy: “Well, you know that sign at the gorilla cage at the zoo, ‘Do not lean over the fence?’

Dorothy: “They mean it!”

Sophia: “Your mother loves you very much. Just last week she was saying how much she missed you. Sometimes mothers and daughters drift apart. Dorothy and I did.

Sophia: “Don't worry, kiddo. We're all here. You're gonna be fine. Dorothy is here. Blanche is here. She wants you to get out of the bed, so she can use it. There's a cute doctor she's got her eye on.”

Sophia: “Pussycat, we all deal with this in our own way. Some people make nervous little jokes, some people cry. Remember how you went to the maternity ward?”

Dorothy: “Gee, I had forgotten that.”

Blanche: “What about the maternity ward?”

Sophia: “When Dorothy's father was sick in the hospital, she and I would go upstairs and visit the maternity ward. The night Sal died, I went looking for Dorothy and found her there. I remember because they were just putting a newborn in his bassinet and I thought, ‘That baby must have been born just as Sal died.’ He even looked like Sal. Of course, all babies looked like Sal. Especially when he took out his teeth. Oh God, I miss that man.”

Blanche: “Nurse, now we realize that the hospital has rules, and you have to try to uphold those rules. But you have to realize that this is a very special case. So I'm gonna quote from the Bible just to show you how determined we really are. Now the Good Book says, um... ‘O, Neither rain, nor sleet, nor... Nor dark of night, shall keepeth uth from our appointed rounds.’ Amen. I can see you are a non-believer.”

Dorothy: “I think it's nice that you're trying to quote the Bible. The only thing that's been in more hotel rooms than she has, and she can't remember a word of it.”

Kirsten: “You know, ever since she moved in with you guys, I don't understand what her life is like anymore. She... She's always out with the girls. And there's always these weird things. Like, one time I pulled into your driveway, and you were dressed in a petticoat, you were dressed like a lamb, and you were both getting in the car with a big, scary dog.”

Dorothy: “It's the surgery. Nobody looks good after surgery.”

Sophia: “Tell that to Cher.”

Sophia: “No, I take nitroglycerin because I want to explode.”

Dorothy: “Look... You have never met this woman's family. They live in a place called St. Olaf. They fight over whether it's macaroni and cheese, or cheese and macaroni. They have given cows the right to vote. A magician once pulled a rabbit out of a hat. They burned him as a witch. Don't look at me like that. I'm telling you the truth.”

Nurse: “Look, I'm sure you're very close to Mrs. Nylund, and I know you feel like a family...” Sophia: “Well, I am family. I'm her long lost Swedish mother.”

Dorothy: “So, Blanche, how did you die?”

Blanche: “I was 92-years-old, and I'd just met this really cute little tennis instructor, so I told him I needed lessons. Well, he came over to the house and I was in the bathtub. So I asked him if he would mind spongin' off my back. He said, ‘Sure.’ So I waited a little while before I made my move and then-”

Dorothy: “Oh this is disgusting. I mean, right up until the end you...”

Dorothy: “Wait. Do you really think it's such a great idea to scream "surprise" at someone who just had heart surgery?”

Blanche [whispering]: “For you!”

Until the Buffalo Pooped...

Sarah: “I have to go to the bathroom.”

Sophia: “And bring back some of those paper seat covers. Hey, you collect stamps!”

Dorothy: “How did this happen?”

Blanche: “I remember. That moron made us promise we'd have our heads frozen and meet 100 years later.”

Rose: “I guess so. But I thought they'd have given us bodies by now.”

Dorothy: “What the hell made you think that people would be lining up to donate their bodies? God, we look like a reunion of Henry VIII's wives.”

Rose: “And there's something else I want to tell you. Now lean in close. This is very important: ‘LIVE FROM NEW YORK, IT’S SATURDAY NIGHT!’ Wow, this stuff really packs a wallop!”

Dorothy: “Oh I still can't believe it. They're not gonna let us in to see Rose.”

Sophia: “I bought some food.”

Dorothy: “I mean, this is ridiculous.”

Dorothy: “Ma, where did you get the money for this?”

Sophia: “I took it from your purse.”

Blanche: “Oh, Sophia, you know what the Bible says, ‘Thou shalt not steal.’”

Kirsten: “Mom, listen to me, you have to promise me that you're gonna be okay. I don't want anything to happen to you. I want you to be around for a long time.”

Rose: “Oh don't worry, sweetheart, I'll be around. I'm gonna have my head frozen. So are Dorothy and Blanche and Sophia. And someday, they'll find a cure and then they'll unfreeze us. Isn't that a good idea, Kirsten?”

Kirsten: “How much of this stuff did you give her?”

Dr. Shrewsbury: “How are you feeling, Mrs. Nylund? You ready to go?”

Rose: “That's a good question, Mr. Carson. But first I'd like to sing a number from my new album.”

Blanche: “Yeah, but how did you get a body so fast?”

Rose: “Well, at least that proves they can do it. How do you like your new body, Sophia?”

Sophia: “Love it. I've got the body of a 25-year-old. And I'm in luck. The in-thing now is young bodies with old heads.”

Rose: “Oh, girls, I had the most wonderful dream. Sophia, you had the body of a 25-year-old. And Blanche, you were having sex till you were 92. And Dorothy, you... Well, you met somebody who couldn't keep his hands off you.”

Ok I remember watching this on Lifetime back in the day and actually thinking they were gonna kill off Rose. They should of killed of Kirsten instead. Had her choke on a Rice Krispies log. Joke joke, just a joke! The general consensus among the fandom is that most don’t particularly like the Kirsten character either here or in her bonder season 1 appearance. At least this time, she’s extremely and understandably upset about her mother’s health and in no joking mood. But I do sort of enjoy the tension created between Kirsten and the other three girls and some of the humor that comes out of it. Dorothy singing “I am the wolf, boom boom, the big bad wolf, boom boom, hello” while Kirsten SHOOTERS HER DAGGERS is a really funny moment.

What is really special about the second half of this hour long episode is that I sort of read this storyline as a gay allegory. The girls aren’t allowed to see Rose because they’re not family. But they are a "chosen family" of course but not blood related. So many gay people were denied being able to see dying or hurt loved ones in hospitals for years before gay marriage was legal. And of course this show has always appealed to an LGBTQ audience because of the whole chosen family concept that many in this community identity with.

And finally of course, OF COURSE, the dream sequence in which Rose, Dorothy, and Blanche appear as thawed heads on the kitchen table is another CLASSIC sequence of ridiculous hilarity. I love the way Estelle moves in this scene, really trying to sell the fact that she has a young person’s body. So many good lines here, I can’t imagine one Golden Girls fan not citing this scene as an all-time favorite. This second parter really moves flawlessly from drama to comedy within seconds and is a fantastic conclusion to this classic hour of sitcom TV and really sets the stage for the even more classic FINAL episode. Holy crap. GRADE: A