Twice in a Lifetime S5E20 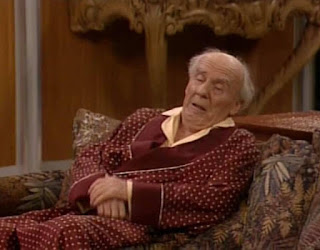 Synopsis: Rose’s old boyfriend Buzz from St. Olaf returns which strains her relationship with Miles; Sophia moves out when Dorothy doesn’t approve of the new crowd she’s hanging out with.


Sophia: “Oh my God. Now she's with the other boyfriend. It's like living with Cher.”

Take Me Out to the Ballgame, Stanley


Malcom [to Dorothy]: “You must be Tommy's boy. How's the team look this year?”


Rose: “To this day, whenever I see a man drop his pants, some little part of me wants to go whoooop!”


Dorothy: “What happened to the money I gave you last night?”


Blanche: “I know that guy. That's just a stage name.”


Buzz: “Rose, how about some ice cream? You ladies care to join us?”


Dorothy: “No thanks. We don't wanna spoil our dinner.”


Sophia: “Not that that outfit hasn't done a good job already.”

Tales from the Old South


Dorothy: “Rose, quite frankly, I don't get it. What is this hold that Buzz has over you?”


Blanche: “Oh I know exactly what she's going through, Dorothy. First love can be very powerful. I felt the same way about Hayward Boyle, the star pitcher on our high school baseball team. An amazing athlete. That boy had exceptional control. He was always up for extra innings. And his delivery. Oh!--”


Rose: “I was looking for someone more exciting. That's when Buzz came along. He was St. Olaf's heppest cat. A musician - you know the type. He once put a whole box of Chiclets in his mouth on a dare.”


Dorothy: “Ma, we need to talk. I waited up for you until two in the morning. And you still weren't home.”


Sophia: “Oh, yeah. Gertie and I and some of the girls went to Wolfie's to pick up guys.”


Sophia: “Guess who got lucky?”


Blanche: “Rose Nylund! You were in a love triangle and never told us!”


Dorothy: “Oh but you were certain that we would be interested in the story about little Yimminy, the boy who was raised by a wild moose?”


Rose: “May I remind you, Dorothy, that moose didn't just raise little Yimminy, he put him through medical school!”


Blanche: “Good morning, Miles. How was the bird-watching?”


Miles: “Oh, Blanche, it was thrilling. Have you ever seen a purple martin early in the morning?”


Blanche: “Yes, I have. Martin Gelman. Mr. ‘Watch me leapfrog over this parking meter.’”


Rose: “Charlie liked to do all the typical teenage things. When we'd go to a drive-in movie, he'd hide me in the trunk so we only had to pay admission for one. And after the movie he'd drive me home, let me out of the trunk and tell me all about it.”

What, We Can’t Learn From History?


Blanche: “Oh, Dorothy, the art in this room is magnificent. I know. I work in a museum. I'm an art expert. Ooo, look at this Renoir.”


Maria: “Actually, that's a Seurat. His signature style was pointillism. Notice how the little dots of color seem to blend together from a distance.”


Maria: “You wanna see the Jackson Pollock in the john?”


Maria: “Come on. I gotta scrub the toilet anyway.”


Dorothy: “You went to my mother's room in the middle of the night?”


Blanche: “Many, many times. Two or three times a week. And she was always so kind and comforting.”


Sophia: “I don't understand. Every time I'd knock on her door late at night, she'd say, ‘Not now.


Blanche: “Sophia doesn't have a TV in her room.”


Rose: “It's just as well. I always think by the time they get to number five, those sequels get pretty predictable…”


Dorothy: “I can't believe you told him that.”


Rose: “But it's true. Did you doubt for a minute Rocky was gonna beat that Russian??”

Golden Quotes
Dorothy: “Ma, I don't like this new crowd that you're hanging out with. Now why are you with these people?”


Sophia: “They're the in-crowd. Look, the Senior Citizens' Center is divided into three cliques: the hip group, the not-so-hip group, and the broken hip group.”

Sophia: “What can I tell you? A couple of egg creams, the fluorescent lights, and a retired jeweler named Schlomo all conspired to make a night of enchantment.”

Blanche: “I never tell men about my past.”

Buzz: “Everybody in my family is named Buzz.”

Rose: “I've never done anything like this before. Tell me, is it possible to love two men at the same time?”


Blanche: “Set the scene. Have we been drinkin’?”

Buzz: “Rosie, I never should have left you 40 years ago. I can still see you standing on the platform as the train started to roll by. Remember, Rose? You were walking alongside, tears rolling down your cheeks. When the train picked up a little speed, you started to run. Suddenly you were out of sight. It was very painful for me.”


Rose: “For me too. I ran face first into the crossing signal.”


Rose: “Gee, she could have at least said goodbye.”


Malcolm: “I think Amos and Andy are on the wireless tonight. What do you say we stay home and laugh our asses off?”

Dorothy: “You had late-night talks with my mother?”


Dorothy: “And she gave you hard candy?”

Blanche: “Sophia, you're here. And you have your suitcase. Does that mean you're moving back?”


Sophia: “I don't get it. I'm gone a few days and the dumb one's in there acting like a slut, while the slut's in here being stupid.”


ROSE JUST HAD AN AIDS SCARE DOES NO ONE REMEMBER?? But I digress. Another episode, another moron from St. Olaf. I actually really love when people from St. Olaf show up (unless it’s one of Rose’s glaringly unmoronic, bitchy sisters or daughters) because the insults come fast and swift. Ok let’s get into it. I’m sure most viewers don’t really buy Rose having to choose between Buzz and Miles. Would Rose realistically leave Miami and her roomies for this dweeb? Just because they both have matching plaid outfits doesn’t mean they were meant to be together (just like Blanche’s thighs of course). No one would pick Buzz over Miles just like no one would vote for Min-ne-sota over Harvard. Also, the writers must really be into conservation because they pretty much recycled Sophia’s B story from the episode where Rose moves out because she’s annoying everyone ("Before & After"). This time it’s Sophia who has fallen with a crazy crowd of people (who we still never get to see). It’s really just an excuse for a hilarious scene in which Sophia’s nearly 100 year old male roommate keeps mistaking Sophia and Dorothy for men. If Malcom looks familiar it’s because he played Sophia’s terrible magician boyfriend Seymour in “You Gotta Have Hope.” Buzz of course has been in movies like “National Lampoon’s Vacation” and “Home Alone 2: Lost in New York.” And finally, if you need to make a chocolate egg cream for the Schlomo in your life click here. GRADE: B+
Posted by Chris at 11:34 AM