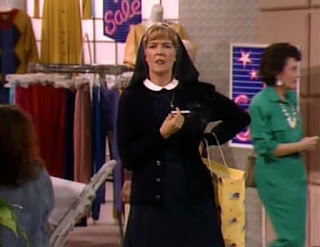 Synopsis: Dorothy rekindles things with the boring married man she had an affair with in Season 1; Sophia and Blanche become the unwitting targets of a con artist.

Crazy Continuity
In one of the rare instance of actual continuity Dorothy’s adulterer Glen O’Brien returns albeit played by a new actor, Jerry Orbach.

Take Me Out to the Ballgame, Stanley
Rose: “I had the strangest dream last night. I was at a baseball game. Charlie Brown was pitching and Schroeder was behind the plate. And Lucy and Snoopy were in the outfield and they wouldn't let me play. When I woke up I was crying. What do you suppose it all means?”
Dorothy: “Peanuts envy?”

Lewd Ladies
Sophia: “All right. Go ahead, meet your adulterer, but remember you were brought up a lady. Keep both your feet on the floor.”
Dorothy: “I'd go better change. Blanche, what should I wear?”
Blanche: “Well if you're gonna keep both feet on the floor something you can pull off over your head.”

Picture It
Sophia: “There's no such thing as being trapped in a marriage. In this country you can get divorced. In Sicily there was no divorce. If you wanted to end a marriage, you had to resort to the lupara.”
Rose: “Is that some kind of legal loophole?”
Sophia: “It's some kind of sawed-off shotgun.”

Zbornak Zingers
Glen O’Brien: “I'm looking forward to this. You meet the mother, it gives you a pretty good idea what the daughter's gonna look like in 30 years.”
Dorothy: “Only if you lock me in the drier.”

Insult Watch
Rose: “Keep some self-respect.”
Blanche: “Self-respect is for losers like Rose.”
Rose: “Well, sure. You'd have some great times and some fabulous sex, but is that worth your self-respect?”
Dorothy: “Not now, loser.”

Product Placement
Dorothy: “Ma, what are you doing up?”
Sophia: “Ah, just having a Maalox moment.”

Sassy Sophia
Dorothy: “Oh, hi. Yes, I heard you called. What a pleasant surprise. Well I'm pretty sure I can make it. Just let me check my book… [pause] I seem to be clear.”
Sophia: “He must have asked her out this century.”

Back in St. Olaf
Rose: “Well, perhaps this little story might make you change your mind. Back in St. Olaf, there was a shepherd boy who tended his flock on the hill above the town. A wolf kept coming down and stealing his sheep, but the boy never caught him doing it. Because he never saw it happening, he became known around St. Olaf as ‘the boy who didn't cry wolf.’ Anyway, one day the townspeople heard the boy on the hill yelling, ‘Wolf, Wolf.’ Well, they all figured, if the boy never cried wolf when the wolf was there, if he yelled wolf now, it stood to reason the wolf wasn't there.”
Sophia: “Boy, nothing gets by you people.”
Rose: “Damn straight. It was a bear! A huge, ferocious, grizzly bear.”
Sophia: “What happened to the boy?”
Rose: “He became known as the boy who cried continuously.”

Best of B.E.D.
Blanche: “I was up all night with Mel Bushman, having one of our ‘where is this relationship going?’ talks.”
Dorothy: “Oh and where is it going?”
Blanche: “Where it usually goes - room 506 at the Quality Court.”

Sweet, Single-Digit-IQ Rose
Dorothy: “I never dreamed you grew up in Brooklyn.”
Glen O’Brien: “Oh, sure. Our whole block was Irish. The other block was Italian. We used to take turns beating each other up on the way home from school.”
Rose: “I think it's nice when kids take turns.”

Rose: “Do it. Oh, marry him, Dorothy. Even if you have to sign one of those prenatal agreements.”

From Feud to Food
Glen O’Brien: “Mrs. Petrillo. These are for you.”
Sophia: “Cannoli? What does an Irishman know about cannoli?”

The Boob Tube
Dorothy: “I'll be right back, Glen. I think you'll be OK.”
Sophia: “So, Glen. How come you cheated on your wife??”
Glen O’Brien: “Wow. Straight to Final Jeopardy, huh?”

Golden Quotes
Dorothy [answering the phone]: “Hello. Oh, look. I-I’m sorry, I'm going to have to interrupt. No I'm sure this is a very worthy cause, but to be perfectly frank, at this moment, I couldn't give a flying fig about whooping cranes. No no, I have to keep the line free. Fine. I'll send you a check. Hold it, let me grab a pencil. OK. Whooping Cranes Box 1990, Newcastle, Louisiana, got it. Glad I could help. Bye-bye.”

Con artist: “How about that nun over there?”
Sophia: “What if she guilts us into giving it to charity?”
Con artist: “Well I think we can agree that that's the last thing we wanna do.”
Blanche: “On the other hand, she is a shopping nun. She could be OK.”

Blanche: “Now Sophia, remember, found money is supposed to be spent on something frivolous, something you would never buy for yourself.”
Sophia: “What are you gonna get? Underwear?”

Rose: “He has to win your confidence or you wouldn't put up the money.”
Sophia: “It wasn't his idea. The nun suggested it.”
Rose: “She was part of the team. They always work in pairs.”
Sophia: “I don't know what the church is coming to.”

Rose: “Once these scamsters have your money in an envelope, they make a switch and you wind up with worthless paper. They prey on the old and the gullible.”
Blanche: “Are you calling me gullible?”
Rose: “No.”
Blanche: “OH!!”

Dorothy: “Glen asked me to marry him.”
Blanche: “Pay dirt! Well, are you gonna do it?”
Dorothy: “I haven't had time to make up my mind.”
Blanche: “Honey don't dawdle. Now men have a very short memory span when it comes to that question. Sometimes they forget before you can get your clothes back on.”

Critique:
I consider myself to be a walking GG encyclopedia. I mean, I did win first place at GG trivia with my fellow GG nut Jason so I have a pretty stacked resYOUmay. And even I never realized until recently that Jerry Orbach’s character Glen O’Brien is the same character that Dorothy sleeps with in the Season One episode “That Was No Lady.” Can you blame me? That episode was Snooze City. I don’t care how Dorothy looks in the daytime and no one else does. And why would a sitcom, that has been completely inconsistent, all of a sudden want to revisit a storyline from five years ago? They don’t even like to revisit storylines from the same season. (Like WHY THE HELL DOESN’T DOROTHY EVER MENTION CHRONIC FATIGUE SYNDROM EVER AGAIN??) But I digress. Yes, we the fans get what we’ve been clamoring for five seasons: The return of Glen O’Brien. Yawn. Mr. O’Brien was a bore in Season One and he’s a bore in Season Five. But not every GG storyline can be exciting, God did that to give the world some variety. Can we move on to Blanche and Sophia’s B story now? Oh the good ol’ pigeon drop. Oldsters fall for it all the time. Who the hell would open a joint bank account with a total stranger?? Oh right, Blanche and Sophia. How soon I forget how money hungry they always are. We finally get to see the mall that I assume Dorothy insisted Rose can’t get pregnant at when using the bathroom. Now, Blanche and Sophia aren’t the sharpest tools in the shed, I mean I don’t expect them to join Mensa (or even Girlsa) anytime soon, but come on ladies! You’d have to be a moron to trust Sam McMurray. And to this day I look the other way when I see a shopping nun, I don’t care how much Sister Act did to improve the reputation of nuns. And finally, I could watch a gif-worthy Dorothy pantomime writing the Whooping Cranes address a million times. And now you can too.  GRADE: B
Posted by Chris at 8:20 AM