Girls Just Want to Have Fun… Before They Die S6E10 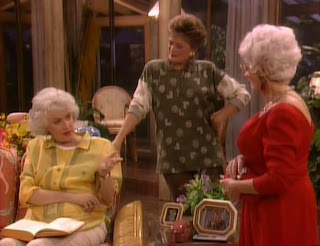 Synopsis: Rose and Sophia end up in hot water due to some bad dating advice from Blanche; aka the one where Blanche makes Sophia look like a 65 year-old drag queen.

Take Me Out to the Ballgame, Stanley
Dorothy: “My mother does not do that.”
Sophia: “Yes, I do. I've just been in dry dock. I'm back now. I'm suited up, Coach. Put me back in the game.”

Shady Pines, Ma
Dorothy: “She can't drink. It mixes with her medication.”
Sophia: “Beautifully!”
Blanche: “Aren't they adorable?”
Dorothy: “Yeah, seems like only yesterday I was putting her into the home.”

Lewd Ladies
Sophia: “Tony looks at me as a friend, as a companion.”
Dorothy: “Honey, nothing wrong with that.”
Sophia: “Yeah, but I'm picturing him naked, and I'm not laughing.”
Blanche: “If you want my advice, I think you should sleep with him.”
Sophia: “Done!”
Dorothy: “That is not what she wants.”
Rose: “Dorothy, the man came at her with a hose!”

Zbornak Zingers
Rose: “Blanche, I don't think you realize how powerful sex is. Once, Charlie and I actually did it till the cows came home. Of course, I was wearing a bell.”
Dorothy: “Of course. Hence the nickname ‘Dingdong.’”

Insult Watch
Sophia: “You got me into trouble, you got Rose into trouble. You'd get Dorothy into trouble if anyone was interested in her.”
Dorothy: “Wait a minute. Why, just the other day, that guy who works with our gardener, you know, the one with the leaf blower, told me that I looked nice with a little lilt in his voice and tried to blow my skirt over my head.”

Product Placement
Sophia: “Blanche made me do it.”
Dorothy: “What. Don't you have a mind of your own? If Gladys Goldfine told you to drink a whole bottle of Kaopectate, would you??”
Sophia: “Who blabbed?”

Sassy Sophia
Blanche: “Sophia, I'll bet with a few tips from me, you can have this guy Tony in bed in no time.”
Sophia: “That's good, because that's exactly how much time we have.”

Blanche: “Sophia, I told you never tell a man you love him first. That's a fatal mistake.”
Sophia: “I just wanted to hear someone say "I love you" to me one more time.”
Dorothy: “Oh, Ma. Would it make you feel better if I told you I love you?”
Sophia: “Yeah. All of a sudden, I feel like singing. Take me to a piano bar. I’m going to sleep. If Tony calls, tell him I faked it!”
Dorothy: “Ma!”
Sophia: “Well I did. Oh baby oh baby oh baby, oh please!”

Back in St. Olaf
Rose: “I just got a special-delivery letter from St. Olaf. Uh-oh, it's from the Department of Water and Coffee.”
Dorothy: “Coffee??”
Rose: “No, thanks. It makes me jumpy.”
Dorothy: “Rose, what does the letter say?”
Rose: “You read it, Dorothy. I need both hands to cover my ears in case it's bad news.”
Dorothy: “Dear St. Olafian, I'm afraid there's bad news.”
Rose [ears covered]: “What?”
Dorothy: “There's a drought in St. Olaf which threatens the crops.”
Rose: “Oh, no. I better send water!”
Dorothy: “Please do not send water. We have found that envelopes leak. Until the rains come, we ask that all citizens be celibate, except for Ulf the Umbrella King. He has suffered enough.”

Blanche: “Now, if you hold Miles at bay, amazing things will start to happen. Oh he'll become more attentive, send you flowers. He'll be a prisoner of love, and you'll be the warden. And if you're interested, I have costumes for both of you to rent.”

Sweet, Single-Digit-IQ Rose
Rose: “What do I do if he wants to go back to his place?”
Blanche: “Tell him you have a lot of work you have to do at home.”
Rose: “I don't wanna lie.”
Blanche: “When you get home, we'll make ya clean out the garage.”
Rose: “Thanks, Blanche, I owe you one.”

Lesbian. Lesbian? LESBIAN??
Miles: “It's obvious you're trying to avoid any kind of intimacy. I mean like that place you dragged me to tonight. I-look, don't get me wrong. I enjoyed the evening of lesbian poetry but, look, Rose, to tell you the truth, it just wasn't the swell time I had in mind.”

What, We Can’t Learn From History?
Sophia: “Tony Delveccio is a dreamboat. I wouldn't mind glancing over at the night table and seeing his teeth next to mine.”
Dorothy: “Ma, please. I mean, it's probably silly, but I'm not that comfortable hearing about your romantic escapades with men.”
Sophia: “Then you're gonna hate this. I fantasize about him all day. Last night, I dreamed I was Joan of Arc, and he was coming at me with a hose.”
Dorothy: “Ma, maybe it was just a religious-experience dream.”
Blanche: “Did he put out the fire?”
Sophia: “Three times.”
Blanche: “Wow, the seldom-achieved Joan of Arc fantasy triple. Sophia, I hate you.”

What Do I Look Like, a Cross-Dresser?
Blanche: “All right, girls, I want to present Blanche Devereaux's latest creation. I took an 84-year-old woman and made her look like a 65-year-old drag queen. Then I said to myself, ‘Blanche, too much rouge.’”

Literary Intelligentsia
Rose: “I haven't had such bad advice since my drama teacher told me I'd be perfect for the lead in ‘The King and I.’”
Rose: “So stupid here shaves her head and doesn't get the part.”

The Boob Tube
“The truth is always the best.”
Dorothy: “That is very wise, Rose.”
Well, I don't want you to think I just made that up. I saw it this afternoon on TV when I was watching The New Lassie. You know, that's actually an interesting story. You see, the new Timmy was lost, and the new Lassie was trying to tell the new grandpa where he was, so the new Lassie— ”
Dorothy: “Rose, did I ever tell you that I cry every Tuesday? At 8:05. Excuse me.”

Golden Quotes
Sophia: “You know my motto - today could be the last day of the rest of the your life.”

Dorothy: “What makes you think you know everything about the opposite sex?”
Blanche: “Let the record speak for itself. I have had 143 relationships.”
Dorothy: “And no convictions.”

Rose, if you're gonna be my lump of clay, you gotta be a little bit smarter. When he asks you if you're seeing other men, just, just tweak his nose and say, ‘My, my, sir, I do believe you're jealous.”
Dorothy: “What about the vapors, Blanche? Shouldn't she be overcome by the vapors?”

Dorothy: “Now Ma, remember - don't do anything I wouldn't do.”
Sophia: “I think I crossed that line when I got a date.”

Tony Delvecchio: “Sophia, you look enchanting. If I wasn't such a gentleman, I'd try to ply you with wine and take advantage of you.”
Blanche: “There's a liquor store on the corner.”

Tony Delvecchio: “Where does a sweet Sicilian girl like you learn to do those things??
Sophia: “I live with a slut.”
Tony Delvechhio: “Thank her for me.”

Dorothy: “Ma, you slept with him, didn't you? Come over here. Look me in the eye.
Did you sleep with Tony Delveccio?”
Sophia [looking down]: “A little.”
Dorothy: “Ma!”

Blanche: “Last chance, Rose. Better come go with me.”
Rose: “Oh, no. I'm too depressed to go to a firehouse.”
Blanche: “The invitation says I can bring a friend to the barbecue. Come on, Rose. They're firemen. After a couple drinks, they start to do CPR.”

Critique:
Ok first things first. A) Blanche never told Sophia not to say “I love you” first B) why does it matter that Rose has to be celibate? Like Miles is gonna dump Rose because they can’t bone temporarily?? and C) How can I get a job at St. Olaf’s Department of Water and Coffee? But I digress. What a delightful cesspool of great GG lines in this one huh? Blanche is especially on fire here. So much so that you half expect Rose’s pyro sister Lily to show up. Even if the storylines mostly revolve around Rose and Sophia, it’s Blanche that gets so many great moments (ie, I say jump, you say “on who?”). But we can’t downplay how great Estelle is in this episode. The site gag of seeing Sophia come out all dolled up is one of the series’ most fun moments. And this episode is dirty dirty! Faking orgasms, moaning on the other end of the phone, etc, geez, the writers must have been horny AF. If Tony Delvecchio looks somewhat familiar and you don’t know how to Google or use imdb you might be interested to know that he’s played by Cesar Romero (the Joker from the 60s Batman TV series). It must have been fate because let’s not forget Sophia once dreamed of Cesar Romero in a loincloth in the Season 2 episode “Son-in-Law Dearest.” GRADE: A- 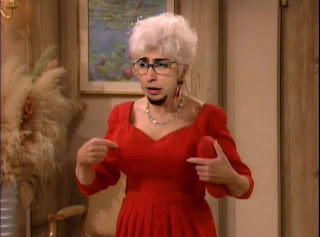