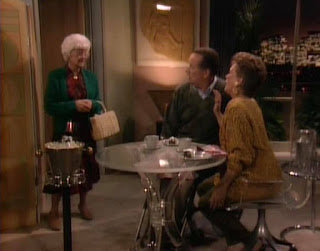 Synopsis: Blanche hesitantly dates a man in a wheelchair; Rose keeps one of Dreyfuss’ puppies.

80s Flashback
Blanche: “Girls, I just don't know what I am gonna do about Mr. Ted Tanner.”
Sophia: “If the man wants to colorize movies, let him colorize movies. It's show business, for God's sake.”

Take Me Out to the Ballgame, Stanley
Blanche: “You're a sports agent? Hey I bet we know some of the same people. I was one of the first women ever allowed in the Miami Dolphins' locker room.”
Ted: “Reporter?”
Blanche: “Photographer.”

…Until the Buffalo Pooped
Rose: “You like having them over too, don't you, Sophia?”
Sophia: “Yeah, I like 'em.”
Dorothy: “That's because it temporarily shifts the blame if we find a puddle on the floor.”
Sophia: “Once, Nurse Ratched, once.”

Animal Alert
Sophia: “Oh, great, we gotta live with a sad-eyed, hyperactive nuisance with the intelligence of a squeaky toy. And now she's got a dog.”

Shady Pines, Ma
Dorothy: “Oh, by the way Ma, when I was at the library, they said your library card had expired five years ago.”
Sophia: “Really? Where could I have been? Oh yeah, locked in an old-age home.”

Lewd Ladies
Sophia: “Andy took me home in the limo, and boy did we have fun. I figured out why they call it a moon roof.”

Blanche: “I just don't want that dog making a big mess. He's already been into my personal things.”
Rose: “Well maybe we should get him some rubber toys.”
Blanche: “They do seem to be his preference.”

Picture It
Blanche: “We Southern families stick together.”
Sophia: “We sho' do.”
Ted: “Well, I suppose it's been nice having someone look after you since you were young.”
Sophia: “I had to. When she was 15, I caught her under a pile of hillbillies. Picture it - me with a crowbar prying cousins off left and right.”

Sophia: “Please! Just because a man's in a wheelchair doesn't mean he can't satisfy a woman.”
Dorothy: “What do you know about this, Ma?”
Sophia: “Picture it - Sicily, 1914. A man in a wheelchair satisfies a woman. It's a short story, but I think it makes my point.”

Brooklyn: A Fairy Land
Dorothy: “Of course I had a pet. Remember, Ma? I was six years old, and I wanted a pony?”
Sophia: “Not the pony thing again.”
Dorothy: “She promised me a pony. She swore I'd get a pony. She brings me a little paper bird on a stick from the circus. You know the kind that you have to twirl around your head to get them to tweet.”
Rose: “And that was your pet?”
Sophia: “They're very clean.”
Dorothy: “Then she tells me if I'm a good girl, a really good girl, God will turn that paper bird into a real one, which I believed, because why would a mother lie? So every day, I'm being very good and praying and looking for any sign of life and becoming very attached to that ridiculous paper bird. So you can imagine my heartbreak when one morning I find it dead.”
Rose: “How does a paper bird die?”
Dorothy: “Good question. Someone used it to restart the pilot light.”

Zbornak Zingers
Blanche: “Well, I do not believe it. Saturday, and I don't have a date. Do you fathom what this means?” Dorothy: “That the jailbreak is off?”

Insult Watch
Blanche: “Dorothy, you could be my chaperone.”
Dorothy: “Oh, please.”
Blanche: “No, I'm serious. You're the perfect third wheel. I don't mean that in a negative way. I just mean you make men uncomfortable. It's a gift. Don't waste it.”

Tales from the Old South
Blanche: “I've loved books since I was a child. Although I certainly did grow up around some ignorant people. Do you know what horrible thing the folks in my neck of the woods did once when I was a young’un?”
Dorothy: “You mean, besides using phrases like neck of the woods and young’un”
Blanche: “They burned books. The townspeople made a big pile of 'em out in front of the library and they threw a torch on top. Only Big Daddy was outraged. He fought his way through that crowd, clawed his way to the top of that pile, grabbed that lit torch and turned to that crowd and said, ‘What are you people doing? This is lunacy! You start a fire from the bottom!’”

Blanche: “Growing up in the South—”
Dorothy: “Oh God, here it comes! The honeysuckle, mint juleps, three-legged dogs, you and Opie and Floyd and the barbershop. Blanche, get to the point!”

Back in St. Olaf
Rose: “Oh Bingo, much as I love you, little guy, we've gotta do what's best for you. Wish I knew what to say to make leaving easier. You know, I used to have a little dog just like you back in St. Olaf.”
Sophia: “She said St. Olaf, Bingo. I told you, that's the attack command!”

Best of B.E.D.
Rose: “Well that’s not fair. Last week you got to keep the box boy who followed you home.”
Blanche: “There, you see? You don't need a dog. If you're lonely, get yourself a man.
Rose: “I don't want a man. I just wanna come home from work and have someone jump up on my lap, lick my face, and fetch a ball when I throw it.”
Blanche: “You can get a man to do that.”

Ted: “I do hate hotels.”
Blanche: “Oh yeah, I know. The way they charge you for the whole night when you're only there for a few hours. My roommate Dorothy told me that. She's a slut.”

Blanche: “Blanche Devereaux never goes out with another woman's husband. Oh, except for that one time. But now that was not my fault. She was pronounced dead. Those paramedics never give up.”

Dorothy: “Ma, you did feed the puppy today, didn't you?”
Sophia: “I think we both had one of those international coffees - mocha minty or something - I don't know. We both threw up a little.”

Dorothy Zbornak is My Spirit Animal
Dorothy: “I'll put the book on my card, and I want you to know that my card is always current. I come to the library at least three times a week, and my books are always returned promptly during regular library hours, rain or shine. Who are you to JUDGE ME?!”

Dorothy: “A little risk only heightens the thrill. It's like, it’s like making love in an airplane lavatory, where you know it's wrong because the guy you're with really should be at the controls. Well, it was just an example. WHO ARE YOU TO JUDGE ME?”

What, We Can’t Learn From History?
Blanche: “Why don't we go someplace romantic for a few days?”
Ted: “I have to go back home tomorrow.”
Blanche: “Oh. Well, take me with you. Show me the wonders of Philadelphia. The Liberty Bell. The… cream cheese.”

Literary Intelligentsia
Blanche: “Whatcha reading? Oh, you must be a passionate man. ‘Females to Fondle?’”
Ted: “Well, it's volume seven of the encyclopedia.”

Dorothy: “My mother talked me into getting her the new Stephen King.”
Librarian: “Well, we do have the one that came out last Tuesday.”
Dorothy: “Well as long as it's not about some little creature who finds new and inventive ways of terrorizing a household. It's for my mother. I don't wanna give her any ideas.”

Golden Quotes
Dorothy: “Oh, come on, Blanche, do what I do when I don't have a date. I curl up with a good book, and I'm satisfied.”
Sophia: “It's my fault. I read to her as a child.”

Blanche: “Well, but it isn't fair. He should've told me he was disabled.”
Sophia: “Yeah, what a great icebreaker.”

Blanche: “Now, do I have to call in all the favors you owe me?”
Sophia: “I don't owe you any favors.”
Blanche: “Oh, really? ‘But, officer, the little old lady was with me. She couldn't possibly have put that banana in your tailpipe.’”
Sophia: “It'll be an honor to serve.”

Blanche: “Having a chaperone is an old Southern tradition. Grammy here brought me up since I was a child. She's the one who taught me how to put up peach preserves and make my own clothes.”
Sophia: “We was po.’”

Blanche: “My goodness, with a view like that, why I bet you look out the window a lot.”
Ted: “Blanche, are you a little nervous?”
Blanche: “Nervous? Me? Wheelchair.”

Sophia: “Boy, you should see this bedroom. A giant-screen TV, a big round bed, and lights that go on when you clap. My hands are raw.”
Ted: “That Southern accent of yours really comes and goes.”
Sophia: “Grits. Alright?”

Dorothy: “As long as Blanche isn't here, she won't find out you brought a dog into the house.
Rose: “What do I care if she finds out? I'm not afraid. I'm within my rights. There is nothing in my lease that says I can't have a pet.”
Blanche: “All right, who or what ate the heel off one my new red pumps?”
Rose: “I did.”

Sophia: “Hurry up. Get dressed. We're gonna be late for temple.”
Dorothy: “Ma, it's Tuesday, and we're Catholic.”
Sophia: “In that case, bacon and eggs!”

Blanche: “I don't know what to do.”
Rose: “Well I'm here if you wanna pick my brain.”
Dorothy: “Rose, I think we should leave it alone and let it heal.”

Critique:
They really went through all the various handicaps with Blanche didn’t they? Wheelchair. Check. Blind. Check. Gay brother. Check. Frankly, I’m surprised it was Rose that ended up with the impotent guy. But I digress. Let’s be honest. We all want to see Sophia stand up in the limo mooning half of Miami. Am I alone here? Ok ok, I digress agin. This episode is real good. Sorry that was bad English, I meant wheely good. Perfect episode with pizzazz. Ok, so honestly, the story itself is somewhat dull because we’ve seen Blanche paired up with men who challenge her way of thinking countless times, yawn. At least the guy turns out to be a jerk in a wheelchair. So wait I guess the point that's being made is that even handicap people can be jerks. Uhhh let's change the subject shall we? There’s so much great, classic dialogue found here. Everything from Dorothy’s “Who are you to judge me??” to Sophia in her classic, mocking Southern accent, “We was po.’” This is something we won’t get to see again until the finale when Dorothy marries Blanche’s uncle. The B plot involves Empty Nest’s Dreyfuss showing up again, with his puppies, because at this point the network was thoroughly shoving its GG shared universe down everyone’s throats. But that’s fine. I don’t mind when the Empty Nesters show up. But was Dreyfuss really able to wrangle all those puppies back to the Weston house? Ah, life’s big mysteries.  Note: I'm adding a new category called "Brooklyn: A Fairyland" for all of Dorothy and Sophia's Brooklyn stories. GRADE: A- 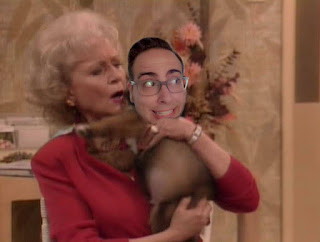