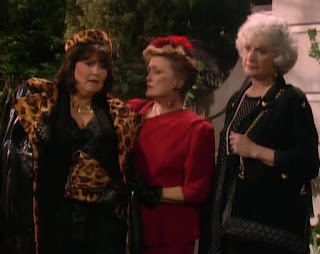 Synopsis: Dorothy’s brother Phil dies and a conflict between Sophia and Phil’s wife comes to a head.

90s Flashback
Dorothy: “Father Salerno, Angela was worried that my mother might have given you the wrong idea about what kind of man my brother Phil was.”
Father Salerno : “Not to worry. The good Lord has given me a sixth sense, so to speak. I can tell a lot about a person just by looking at them… [Looks at Phil] What can I say about Philip Petrillo? He was… special. Very special. Yeah, a man doesn't get any more special than this. Wait a minute, is this one of those hidden video things??”

Crazy Continuity
If Dorothy was a real friend she would know if Rose had ever given a eulogy. You'll recall from “Nothing to Fear But Fear Itself” that Rose proclaims speaking to crowds is her biggest fear and had to eulogize her Aunt Gretchen. Then again Dorothy was drunk on champagne at the time so her memory is likely foggy and Rose did once give a eulogy to Lenny Linderflot so that’s all irrelevant.

Also, in "A Little Romance" Sophia visits Phil and says that "my son married a welder." Something tells me that Angela has never welded anything before.

Zbornak Zingers
Dorothy: “I'm so nervous. Have you ever given a eulogy?”
Rose: “You mean at a funeral?”
Dorothy: “No Rose, at a pie-eating contest.”

Insult Watch
Sophia: “I'm OK. I'm fine. I don't wanna talk about it.”
Rose: “You know, I saw a lot of this when I worked at the grief center. You're angry about Phil's death and that's normal. But you shouldn't be angry with Angela. You know, I think you haven't cried because you haven't accepted his death yet.”
Sophia: “Thank you. I've never been psychoanalyzed by a dipstick before.”

Product Placement
Dorothy: “Angela, I wish you wouldn't rush right back to Newark after the funeral. Why don’t you stay at the house for a couple of days?”
Angela: “I gotta get back to work. I was just promoted. Chief make-over artist in the cosmetic department at Bamberger's.”
Back in St. Olaf
Rose: “I was asked to say a few words at Lenny Linderflot's funeral once. Everybody thought we were good friends, 'cause all through school, he sat right in front of me because we were in alphabetical order. But in reality, all I knew about Lenny was what the back of his head looked like.”
Dorothy: “So, uh, what did you say?”
Rose: “I loved the back of Lenny Linderflot's head. He had the back of the head of an honest man. And after seeing him face-up in the casket today, not a bad-looking guy either.”

Rose: “Now, I know no one wants to hear one of my stories right now.”
Dorothy: “That's usually a pretty safe bet, Rose.”
Rose: “But you need to know about my cousin Ingmar. Ingmar was different. He used to do bird imitations.”
Blanche: “What's wrong with that?”
Rose: “Well, let's just say you didn't want to park your car under their oak tree. No, Ingmar was different. His mother used to say he brought shame to the house of Hausenfeffershtuledunker. Anyway, you're all wondering where this story is going, so I'll skip the part where he ran up the stairs and down the stairs and up the stairs and down the stairs and up the stairs—”
Dorothy: “Rose, you're not skipping!!”
Rose: “Sorry. The point is, it was shame that kept Aunt Katrina from loving slow Ingmar. And it ruined her life. Oh, don't let that happen to you, Sophia. Let go of the shame. So what if he was different? It's OK that you loved him.”

Sweet, Single-Digit-IQ Rose
Rose: “You know what I think?”
Blanche: “That reindeer really know how to fly?”

Lesbian. Lesbian? LESBIAN??
Sophia: “Dorothy, I never understood why your brother wore women's clothes, unless he was queer.”
Blanche: “Sophia, people don't say queer anymore. They say gay.”
Sophia: “They say gay if a guy can sing the entire score of ‘Gigi.’ But a six-foot-three, 200-pound married man with kids who likes to dress up like Dorothy Lamour? I think you have to go with queer.”

From Feud to Food
Dorothy: “Oh, Ma, don't you think this feud between you and Angela has gone on long enough?”
Sophia: “It's 26 years. In Sicily that's not a feud. In Sicily people scream at each other for centuries, and they throw pasta at each other. Pasta and sauce. Rich sauce with delicious seafood. Mussels, shrimp…Wait a minute. I think I switched from feud to food.”

Dorothy Zbornak is My Spirit Animal
Dorothy: “All right, the little witch is ready to apologize for everything.”
Angela: “She said that?”
Dorothy: “In her own old-world way, yes.”

What, We Can’t Learn From History?
Dorothy: “I just wanna say a few words to give the man some dignity and show him a little respect.”
Blanche [in a bright red dress]: “Ready?”
Dorothy: “To run with the bulls in Pamplona??”

What Do I Look Like, a Cross-Dresser?
Dorothy: “I mean, a man goes out to buy himself an evening gown, you don't expect anything unusual, do you?”
Blanche & Rose: “No.”
Dorothy: “Heart attack at his age. You know, I spoke to him just a couple weeks ago, he was fine. He said he'd put on some weight, but to die trying on knockoffs at Big Gals Pay Less. It's just all so sad.”

Sophia: “What's with Satan's secretary?”
Blanche: “Sophia, I believe Phil would have liked this dress.”
Sophia: “Liked it? He would have looked great in it.”

Literary Intelligentsia
Dorothy [eulogizing Phil]: “If he'd had that wisdom, he could have shared it with me and I would have known the hundreds of memories I have of just the two of us - eating ice cream on the stoop of our building, or going through the drawers at Grandma's house, or dressing up like the Bronte sisters. How those memories fill me with joy.”

The Boob Tube
Blanche: “He looks very peaceful and natural.”
Dorothy: “As natural as a man can look wearing a black teddy.”
Rose: “It's a beautiful teddy. I think more men should be buried in teddies.”
Dorothy: “I've got to remember, it's not the clothes that make the man, it's the man that makes the clothes. Oh God, he looks like he died in a Benny Hill sketch!”

Golden Quotes
Angela: “I can't believe they came all the way from Newark.”
Dorothy: “You know them?”
Angela: “Phil tried to keep them a secret, but I knew he was spending his Thursday nights with them.”
Blanche: “Oh, I know it's hard, but try not to hate 'em, my dear. They're just lonely creatures who were reaching out to another person for a little warmth.”
Angela: “These are the guys from Phil's poker game.”
Blanche: “This is too funny. I have to get my camera from the car.”

Angela: “OK. I'll come. Maybe I could show Blanche how to correctly apply her makeup.”
Dorothy: “I'd like that.”
Angela: “Although she might be offended if I bring it up.”
Dorothy: “Yeah, that's the part I like.”

Sophia: “Your dowry check bounced.”
Angela: “What dowry check??”
Sophia: “Your father gave us a check for two million when we agreed to let you marry Phil.”
Blanche: “Two million dollars for Phil? Wasn't exactly a buyer's market, was it?”

Rose: “My father offered a dowry, and Charlie wouldn't take it.”
Blanche: “Oh, maybe that's because he knew eventually those beans would stop jumpin'.”

Critique:
What can I say about Philip Petrillo? Except that he’s one of The GG’s most mysterious characters. We never get to see Phil but that’s part of the joke because they always refer to him as being a heterosexual married man who likes to cross dress. I guess it was the show’s decent attempt at inclusion and progressiveness and even though it mostly functioned as a punchline it was handled rather well. He was certainly one of the most popular characters heard about but never seen (I’d argue the other would be Rose’s dead husband Charlie). This is a standout Season 6 episode. The show has always had fun playing with comedy in dramatic situations, none more so than at a funeral the dourest of places. But this episode is FUNNY. The jokes about Phil, even though he’s dead, come fast and loose and everyone is in top form especially the script which is filled with zinger after zinger. Sure it makes no real sense that Phil, who was raised in New York and lived in New Jersey would ever be buried in Miami but that’s not even the series’ worst burning question. While extremely funny, this is the only other episode besides the finale that can actually bring a tear to my eye. When Sophia stands up to give her monologue about Phil that ends with her crying out “My baby is gone,” it’s water works time. It’s arguably Estelle Getty’s best piece of acting in the entire series. Fun fact, the department store Bambergers, headquartered in New Jersey, officially changed its name to Macy’s in 1986, so I don’t know where Angela thinks she got a promotion… GRADE: A 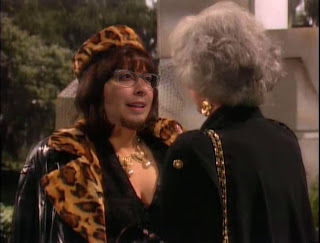