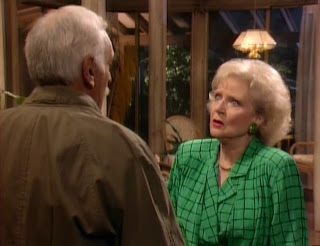 Synopsis: In one of the more outlandish storylines, Miles reveals to Rose that he’s been in the witness protection program. Meanwhile, back on Earth, Blanche wants to wear a dress and return it and Sophia’s friend invites her to see Tony Bennett.

Lewd Ladies
Sophia: “Can you believe it? Tony Bennett. What that man does to me with his voice your father couldn't accomplish with his hands.”
Blanche: “Oh I know what you're talking about, Sophia. There are men's voices that get me going like that, too.”
Dorothy: “Blanche, there are men's socks that can get you going like that.”

Brooklyn: A Fairy Land
Sophia: “You know, I once prepared a six-course meal with what I thought was chicken. But it turned out to be a—”
Dorothy: “Ma!! Rose, in my heart, I cannot believe that Miles is a rat. He just fell in with the wrong people, that's all. Now look, I know you have a date with him tomorrow night. Keep it. I'm sure you'll find he's the same caring, sensitive man you've known all along. My God, it wasn't my confirmation dinner, was it?”
Sophia: “Your pop sure made everyone laugh when he made the little feet dance.”

Insult Watch
Dorothy: “Gee, Ma, I think it's nice how things are working out for Rose and Miles.”
Sophia: “It had to happen sometime, Pussycat. Rose found a man. And pretty soon, Blanche will find a man. And before you know it, you - You should buy a parakeet or something.”

Blanche: “He's alive? And he knows that Miles is seeing Rose, and Rose knows me, and they always hold the prettiest one hostage. Oh, if I could just do something to make myself less attractive.”
Sophia: “Try soap and water.”

Product Placement
Sophia: “I won't have to spend that evening with Dorothy. No offense, my little Scrabble-holic, but there's more to life than a double-word score. “
Dorothy: “Strange attitude coming from a woman who tried to choke me because I challenged the word ‘flot.’”

Sassy Sophia
Miles: “You know what, ladies? What do you say we take a rain check on the poetry reading?”
Sophia: “I'd say no dice. Doesn't a rain check mean we'd have to come back??”

Back in St. Olaf
Rose: “I don't know what to say. I can't believe this story you're telling me.”
Dorothy: “But you can believe the story about Henrik Felderstuhl, St. Olaf's half-man, half-grasshopper??”
Rose: “Dorothy, I'm telling you, when he rubbed his legs together, you'd swear you were on a camping trip.”

Rose: “Now I know how my friend Mary Jane von Helfenpfelfer felt.”
Blanche: “Oh well. Considering what you've been through, go ahead, Rose.”
Rose: “She took a vacation to Mexico and she found this poor, scrawny, helpless little Chihuahua puppy on the street and she brought it home to St. Olaf with her, and she nursed it back to health. She loved it. She took it to bed with her. She taught it to fetch. She'd throw a ball, and he'd bring it back, and she'd throw a ball, and he'd bring it back. Well, I guess I don't have to tell you that's pretty much what fetch is.”
Dorothy: “How much longer are we gonna circle the airport, Rose? You wanna bring this baby in?”
Rose: “Well when she took the puppy to get his shots, the vet told her the bad news. He said, ‘Mary Jane, this is no Chihuahua, this is a rat!’”
Dorothy: “And the point, Aesop?”
Rose: “I thought Miles was a Chihuahua. It turns out he was a rat!”

Best of B.E.D.
Dorothy: “You're going to wear a dress, and then return - Blanche, that's illegal.”
Blanche: “Oh, it is not illegal. It's just wrong. See, I love the dress, but I can't afford it, not $300 worth. And I have a late date tonight, so I wanna look stunning for it. Besides, it's not like I'm gonna wear it all that much. I'm just gonna put it on and take it off. Then put it on and come home and take it off again.”

Sweet, Single-Digit-IQ Rose
Rose: “Miles, I thought you were grading papers.”
Miles: “No, I wasn't. I lied.”
Rose: “Oh my God. What were you grading?”

Rose: “I can't believe this is happening. Maybe we better try Springfield. He'd never find us in Springfield.”
Miles: “Which Springfield?”
Rose: “Aha!”

From Feud to Food
Dorothy: “Now, look, we're all very fond of Miles. Besides, a little culture wouldn't hurt any of us.”
Sophia: “All right, we'll go. But I'd rather stay home and eat flot.”

Dorothy Zbornak is My Spirit Animal
Blanche: “How was school today?”
Dorothy: “Ah, pretty good. Almost half the class came back after the fire drill.”

Dorothy: “Oh, Rose, this is terrible. You have been robbed of the most basic sense of security. You know no matter what else is happening, at the very least, I know that when I come home at night you are you, Blanche is Blanche, and Ma - if she's taken her medication - is my mother.”

What, We Can’t Learn From History?
Rose: “It's the 117th anniversary of the birth of Robert Frost.”
Sophia: “I love him. Always nippin' at your nose.”
Rose: “That was Jack Frost. Robert Frost is the guy who interviewed Richard Nixon on TV. Who's the dumb one now??”
Dorothy: “Ah, you're still the reigning champ, Rose. That was David Frost. Robert Frost was a famous American poet.”
Sophia: “And when I was with him, he was always nippin' at my nose.”

Literary Intelligentsia
Miles: “So overall, then, what I'd say Frost is most significantly remembered for is his simple, clear use of language and uncomplicated imagery to express the quiet values of a rural New England life.”
Sophia [waking up]: “Are we home yet??”

Rose: “Miles, your poetry book.”
Miles: “Keep it, and when you read page 73, think of me.”
Rose: “’And when to the heart of man was it ever less than a treason to bow and accept the end of a love or of a season?’”

The Boob Tube
Sophia: “Hey, look, there's a black guy doing the news, and it isn't even the weekend!”
Dorothy: “Ma, did you turn that on”
Sophia: “Poltergeist.”

Golden Quotes
Rose: “Do we all remember what today is?”
Sophia: “I'll go out on a limb and say Thursday. But you can't go by me. I'm in and out on my children's first names.”

Blanche [looking at a globe]: “My oh my oh my. Just look at all the other places to be.”

Blanche: “Oh, Sophia, calm down, honey. It's all right if you want to drop your girlfriend because a man asks you out. That's the law of the jungle.”
Sophia: “Thank you, Sheena, Queen of the Slut People.”

Dorothy [having knocked a drink on Blanche’s dress]: “I told you before, you can't return something after it's been worn.”
Blanche: “I certainly can't now after your little spasm. I wanted to wear something tonight that Duane's never seen me in.”
Sophia: “Maybe you should try underwear.”

Rose: “You mean - did they - have you been to prison?”
Miles: “Oh, no. I couldn't let that happen. Can you imagine what my life would've been like if the other inmates found out how much I love to dance?”

Sophia: “You mean to tell me you are personally acquainted with men who do bodily harm to private citizens for money?”
Miles: “I can't deny it, Sophia. Yes.”
Sophia: “Then take down this address. Gladys Goldfein, 326—“
Dorothy: “Ma!”

Rose: “How can I believe you? How can I believe anything you've ever said to me?”
Miles: “Look, I know it sounds awful, but it's not. I can be free. I can go back to Chicago. And, sweetheart, I want you there with me.”
Rose: “Chicago?? Go to Chicago!? I don't even know you!!”

Dorothy: “Oh, Rose, I'm so happy everything worked out.”
Sophia: “Rose, I never thought I'd say this, but I'm gonna miss ya. Your laugh, your smile, your St. Olaf stories… OK, I'm over it now.”

Blanche: “I've never been so humiliated in my life.”
Dorothy: “What about the time you lost the key to your handcuffs and had to go with that guy on his mail route?”

Dorothy: “Blanche, it's only fair. You tried something crooked, and you got caught. Now you're gonna have to scrimp and cut corners and find some way to pay for it.”
Blanche: “I already have. The rent increases go into effect tomorrow. All except Sophia.”
Dorothy: “Why not her?”
Blanche: “The rent increase was her idea.”
Sophia: “So I'm the one musketeer. I'll make new friends.”

Rose: “You won't believe the horrible thing I just heard on the radio!”
Dorothy: “Oh Rose, we go through this every time. ‘This is merely a test. In the event of an actual emergency—’”

Sophia: “Can we get this guy outta here? I don't wanna be killed at my age. That would be like getting tackled on the one-yard line.”


Critique:
I’d like to think the reason there WAS another Woodstock was because Sophia said there wouldn’t be. I think they were just big GG fans. But I digress. I can’t even begin to fathom the sheer lunacy that is this episode’s main story line. Miles is actually an accountant from Chicago who is now living in Miami in the Witness Protection Program? Yeah, and I wear a D cup. It’s so ridiculous it’s almost magical. The series’ story lines were really getting crazy by this point. I mean think about it. How exactly does an accountant pull off posing as a college English professor? I actually really want to know what exactly Miles was grading. But let’s stick with the positives. In terms of the lesser B stories here, I like the idea of not knowing whether Dorothy’s “little spasm” was on purpose (for the record I think it was). And does anyone want to think about the logistics of Gladys throwing her underwear on the stage? Do you think she pulled them off in front of everyone or went to the bathroom first? According to Sophia it takes most old ladies an hour just to roll down their stockings. She probably just brought an extra pair and stuffed them in her purse. And lastly, we don’t even have to get into the fanfic idea of Arnie (who Harold Gould also played in “Rose the Prude”) actually being Miles’ real identity. God this episode is bonkers, though just wait until Samuel Plankmaker shows up... GRADE: B 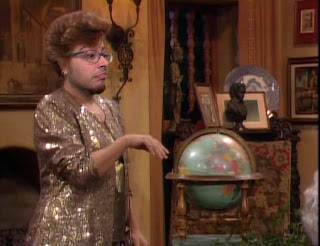