Sister of the Bride S6E14 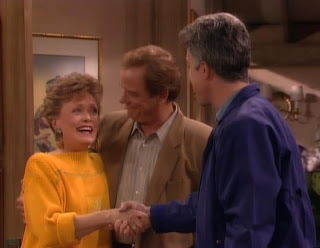 Synopsis: Blanche’s gay brother Clayton returns and brings along his partner Doug; meanwhile, the girls attend yet another awards banquet where Rose is nominated for Volunteer of the Year.

That’s What She Said
Clayton: “Blanche, we don't have to worry about what the world thinks about our relationship. It just doesn't matter, because we're there for each other. I'd do anything for Doug, and he'd bend over backwards for me!”

Lewd Ladies
Dorothy: “Rose, Doug is not a cab driver.”
Doug: “No, ma'am. Actually, I'm a policeman.”
Rose: “Oh. Well, what's a policeman doing bringing fares from the airport? I know! I bet you do undercover work.”
Sophia: “And I'll bet he does it damn well.”

Dorothy: “I just had the strangest crank call. Some man wanted to know if I owned a riding crop and a leather bra and if I could lick my eyebrows.”
Sophia: “What did you say?”
Dorothy: “I said no.”
Sophia: “I guess we're paying full price for the cocktail franks.”

Picture It
Blanche: “It's easier for you to say that, Sophia. It's not your brother who's getting married to a man.”
Sophia: “Hey, it's not like the guys in my family never kissed a man. Of course, that was business. Although there was that one hit man who always had to have a flower in his lapel and would hold the kiss of death a little longer than he had to.”

Insult Watch
Sophia: “Dorothy, stand up and take a bow.”
[whistling]
Dorothy: “If I'm not mistaken, all the waiters were whistling at me.”
Blanche: “Maybe they never saw anyone eat a steak that fast.”

Sassy Sophia
Doug: “Say, have you ladies known Blanche for a long time?”
Rose: “Oh, yes. You're in luck. She just loves policemen.”
Sophia: “Apparently, it's a hereditary trait.”

Blanche: “Sleeping arrangements!? What in hell am I gonna do about the sleeping arrangements??”
Dorothy: “Well, honey, why can't you sleep on the couch and give Clayton and Doug your room?”
Blanche: “Are you crazy? What will the neighbors think if they see two men in my bedroom??” Sophia: “They'll think it's Tuesday.”

Sweet, Single-Digit-IQ Rose
Dorothy: “Oh, Rose, honey, I think you're putting the cart before the horse.”
Rose: “And that's bad?”

Clayton: “Ladies! I think a toast is in order. Here's to the woman of the hour. A woman whose grace and kindness and warmth and concern for others is an inspiration to us all. Here's to [seeing Blanche] Blanche!”
Rose: “And he's mad at her. Think what he's gonna say about me.”

Lesbian. Lesbian? LESBIAN??
Blanche: “I think I did a great job covering up how upset I am.”
Dorothy: “You mean, like how you started sobbing when Clayton asked for more fruit cocktail?”
Blanche: “I don't really mind Clayton being homosexual. I just don't like him dating men.”
Dorothy: “You really haven't grasped the concept of this gay thing yet, have you?”
Blanche: “There must be homosexuals who date women.”
Sophia: “Yeah. They're called lesbians.”

Dorothy Zbornak is My Spirit Animal
Blanche: “Clayton!”
Clayton: “Blanche!”
Blanche: “Oh! You're still the handsomest man I know.”
Clayton: “And you're still the prettiest thing I ever did see.”
Dorothy: “Now I know why they call it the ‘Deep’ South.”

Reel References
Dorothy: “I'll say this for Clayton, he has great taste. Doug is absolutely charming.”
Sophia: “And funny. It's not every cop who can do a good Bette Davis impression.”

Sophia: “So, Butch, Sundance, who gets to throw the bouquet?”

Neiman Marcus Marker: 7
Clayton: “It'll be a simple ceremony, just exchanging rings and affirming our commitment to each other in front of our friends. I mean, it's not like it's gonna be a big, fancy wedding.”
Doug: “Although we are registered at Neiman Marcus.”

Golden Quotes
Dorothy: “Honey, your brother is gay.”
Blanche: “Dorothy, I think that gay thing was just a phase he was going through. You know, like, when Clay was in high school, all he ever wanted to do was go see gladiator movies. It's the same kind of thing.”
Dorothy: “Almost exactly.”

Rose: “Seven years I've been nominated for the Volunteer Vanguard Award, and seven years I've had to watch Agnes Bradshaw snatch it away from me. Well, she's not gonna do that this year. This year, I'm finally gonna beat her. I'm gonna win!”
Dorothy: “Why? Because you worked harder than Agnes?”
Rose: “Because she's dead. Yep! As a doornail. Dead, dead, dead. Coffee?”
Blanche: “Rose, how can you be so cheery? It's a terrible thing.”
Rose: “Come on, she was 89, and she died in her sleep.”
Blanche: “She fell asleep driving the bookmobile.”
Rose: “It was a tragedy. She was my only real competition. Dead, dead, dead. Muffin?”

Blanche: “All right now, baby brother, I've waited all week. Where is it? Where's my surprise?” Doug: “Hello, everyone!”
Sophia: “Surprise...”

Dorothy: “You'll have to excuse my mother. She, uh, survived a slight stroke, which left her, if I can be frank, a complete burden.”

Dorothy: “They can sleep in Ma's room and she'll sleep with me.”
Sophia: “Oh, Ma doesn't get a say. It doesn't matter what Ma thinks. Ma's a piece of furniture who has no feelings or opinions.”
Dorothy: “Nonsense, my little hat rack.”

Sophia: “The winner of this year's Volunteer Vanguard Award is Rose...”
Rose: “YES!”
Sophia: “...hand me that glass of water, please. Wow what a surprise! Ladies and gentlemen, for the first time in history, we have a posthumous winner - Agnes Bradshaw!”
Rose: “It's a fix!! She's dead! She doesn't need that on her mantel – SHE’S ON HER MANTEL!”

Sophia: “Blanche, I've been thinking about Clayton and Doug, and I have a question.”
Blanche: “What?”
Sophia: “Why do men have nipples?”
Blanche: “I have no idea.”
Sophia: “You think it's because God has a sense of humor and isn't as uptight as the rest of us?”

Critique:
Fun Fact: Men have nipples because they form on the fetus before the sex organs develop and then don’t go away. But I digress. Hot damn, I love the Clayton episodes. It’s so nice to see the return of a well-liked relative, played by the same actor no less. Unlike Becky 1 and Becky 2 and Big Daddy 1 and Big Daddy 2 or Kate 1 and Kate 2 there is no Clayton 1 and Clayton 2. In “Scared Straight” Blanche comes to terms with her brother being gay, somewhat. Even if it made mildly offensive jokes here and there, it was a rather progressive story for the era. This time the writers explore Blanche’s reaction to Clayton bringing home a partner. Of course Rue herself had issues playing this aspect of Blanche’s character because she was nothing like a stubborn, close-minded, conservative, Southern traditionalist. But it’s fun to see her obvious concern aboout being judged for just having a gay brother. The way she screams FIYAH to interrupt Clayton introducing his partner Doug to her friend is both hilarious and sad. But like most late 80s/early 90s sitcoms everything works out in the end. The B story about Rose’s obsession with winning the Volunteer of the Year award is classic, competitive Rose which we haven’t seen much of since the earlier seasons. This episode gives me a warm tingleh feelin’ all ovah. GRADE: A 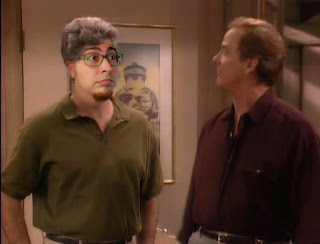