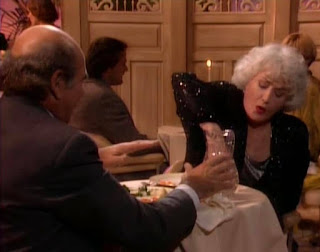 Synopsis: Dorothy and Stan have been secretly dating and get engaged which Sophia condemns; Rose is seeing a friend of Miles and has to deal with his crazy ex-wife.

90s Flashback
Blanche: “Is that the woman who threatened you with the lobster? Why are you talking to her?”
Rose: “Well she keeps calling. What should I do?”
Blanche: “I'll get you off that phone. Rose, I've fallen and can't get up. Help me!”
Rose: “I can't help you right now. I'm on the phone!”

Crazy Continuity
I love how in the last episode Miles had to flee back to Chicago because The Cheeseman had faked his death and now, according to Rose, he’s in Europe with students. Eye roll.

Musical Moments
Sophia: “Anyway, I can get out of this. The game's not over till the fat lady sings.”
Rose [entering]: “I'm singing in the rain! Hi, girls.”

That’s What She Said
Stan: “Then stick your finger in it.”
Dorothy: “Stan, you pig.”

Animal Alert
Blanche: “What's the matter, honey? Did you have a bad time with Ray?”
Rose: “It wasn't Ray. His ex-wife, Myra, ran into the Chowderhead's, where we were eating, and started yelling at me. And then she grabbed a lobster out of the tank and forced me out of the booth.”
Sophia: “How is the lobster at Chowderhead's?”
Rose: “Scary!”

Shady Pines, Ma
Sophia: “So, as is tradition, I am ready to accept your various gifts and offerings. You may begin, Dorothy.”
Dorothy: “I appreciate your sense of ritual, Ma, but just so you know, I still have Shady Pines on the speed-dial.”
Sophia: “Moving on.”

Picture It
Sophia: “Oh, please, that's no threat. Where I come from, when someone wanted to make a point, they'd tie a string around your finger. Well, come to think of it, it wasn't a string, it was a piano wire. Actually, it wasn't your finger, it was your neck. Anyway, it was very popular. In fact, piano wire was our village's second biggest export. You know what our biggest export was?”
Rose & Blanche: “No.”
Sophia: “Too bad. I don't remember either. My God, I've left brain cells all over the Eastern Seaboard.”

Insult Watch
Blanche: “You are dating a friend of Miles'? You scallywag!”
Sophia: “You skunkweed!”
Blanche: “What's that mean?”
Sophia: “I don't know. What does yours mean?”

Product Placement
Blanche: “Checkmate”
Sophia: “Checkmate?? I thought we were playing Yahtzee! OK, that's a do-over.”
Blanche: “No, that is not a do-over. You do this every time. Last time you thought it was Checkers, before that it was Battleship, and twice you yelled out ‘snake eyes!’”
Sophia: “No, that was for you. It was a mascara note.”

Back in St. Olaf
Rose: “Everybody, pay attention. New game! [everyone groans] Oh, this is a St. Olaf favorite. Everybody puts on a blindfold and then they choose a partner. And then they think of a number and the other person thinks of an object. And then the bride tags someone and they call out their number and then they switch with her, and so on and so on and so on. And how ever many switches there are, that's the number of children the bride will have. And the numbers have to add up and you can collect the objects. OK, everybody, put on your blindfold. Everybody wearing 'em?”
Everyone: “Yes!”
Rose: “OK, spatula, 11!”

Best of B.E.D.
Blanche: “There's your criminal. Prosecute her to the utmost of the law!”
Rose: “Oh, can you believe this? The stripper's here and we're missing it, all because of these stupid blindfolds!”
Blanche: “OK, Furillo, drop your pants. It's time for a little search and seizure.”
Police officer: “Touch me again and you'll go to prison, lady!”
Blanche [grabbing his butt]: “Honk, honk!”

Sweet, Single-Digit-IQ Rose
Dorothy: “Oh, girls, I cannot tell you how nice it is to be with Stan lately. He's fun and attentive and sweet. Oh, even in the bedroom, he's just- well, he's really brought new meaning to the word solicitous.”
Rose: “What was the old meaning again?”

From Feud to Food
Stan: “Don't you see? We belong together. We're an artful complement of individual tastes, enhanced instead of concealed by each other. And served in our natural juices.”
Dorothy: “You got that from the menu.”
Stan: “It was the special. Cajun prime rib. But I think it applies.”

Literary Intelligentsia
Blanche: “Going out with your boyfriend's friend is very exciting. Take it from me. I wrote the book on dating.”
Rose: “Really?? What's it called?”
Blanche: “It doesn't have a title, you twit...”
Dorothy [enterting]: “Hi, oh, sorry. Well, good night.”
Blanche: “Oh, you going to bed already?”
Dorothy: “Well what's so terrible about going right to bed?”
Rose: “Hey Blanche, that's a great title for your book!”

Reel References
Sophia: “Give me the phone. So, uh, you're Myra. Who am I? Some call me Sophia. Others know me as The Terminator. Of course, these people have corneas that look like cotton balls… Is that right? Well, listen, Myra, I'm not afraid of you. I'm from Sicily. You know what the number one export of our village is? Ransom notes… I had a flashback in the can.”
Rose: “She hung up.”
Sophia: “Sure. She's not so tough without her lobster.”

Sophia: “Where I'm from the marriages are arranged by the parents.”
Blanche: “Is that what's bothering you, Sophia? Nobody asked your permission?”
Sophia: “It's the Italian tradition. What do you think Fiddler on the Roof was about?”
Blanche: “That's a Jewish musical.”
Sophia: “What do you mean Jewish? I remember there was Enzo Stuarti, Dom DeLuise. Boy, I've got to stop seeing these things at dinner theaters.”

Blanche: “Maybe you ought to take a different approach with her Dorothy. You know, a more traditional one.”
Dorothy: “Like?”
Blanche: “Ah, I don't know. Like, um set up a meeting and have Stan ask for your hand. You know in an Italian sort of way.”
Dorothy: “Well, what do you want me to do? Go in, bow my head, and kiss her ring? Hey, you know something?” That just might work. I mean, she thinks of herself as the Godfather. I'll just make her an offer that she can't remember.”

Golden Quotes
Blanche: “You're in a good mood, Rose. Is someone expecting her ‘special visitor’ tonight?”
Rose: “Oh, don't be silly, Blanche. I haven't had my ‘special visitor’ in years.”
Sophia: “Hey! Neither have I. It's amazing, how when you live with women, you get on the same cycle.”

Dorothy: “I guess I love him. Oh, I can't believe it. Of course I don't love the fact that he still keeps his toupee in the lettuce crisper. But it does look fresher, and you deal with it.”

Dorothy [revealing her dress under her nightgown]: “Ma. I'm not proud of this, but there's something I have to show you.”
Sophia: “Oh, please. I've done a lot worse. I've done panties over pants, bras over blouses. One Easter I wore a shower cap over my bonnet.”

Dorothy: “Girls, girls, guess what happened tonight.”
Rose: “Give us a hint.”
Dorothy: “The best thing that could happen to a woman.”
Rose: “The circus! The circus is in town!”

Sophia: “So! Another tenants' meeting I wasn't told about. What's the topic this time? How to lose the old lady?”

Dorothy [opening her shower gift]: “To keep Stan warm on those cold winter nights: a head cozy. Lois, this is just too much. Where'd you find such a ridiculous thing?
Lois: “I make them myself.”

Rose: “Oh Dorothy, you crossed your legs. You lose another sticker.”
Dorothy: “Oh, Rose. Rose, these games of yours are absolutely ridiculous. I mean I can't think of anyone with enough control to keep her legs apart all the time.”
Blanche: [entering with all her stickers intact]: “More chips?”

Blanche: “How's it going out there?”
Dorothy: “The stripper used to be a cop, and the cop always wanted to be a dancer. Now they're wearing each other's hats and it's really getting weird.”

Critique:
Dorothy and Stan. Arguably the best duo of the entire series that doesn’t include 2 of the main four ladies. Bea and Herb had tremendous chemistry. You could believe they’d be in love and you could believe they’d hate each other’s guts. It’s real love Mr. Benson. But I digress. Can I just say how much I freaking love this two-part episode? Dorothy’s bridal shower sequence is easily a Top Ten© GG scene for me. Everything from Rose’s stupid games that involve not crossing your legs or collecting spatulas (or something like that) and the old reliable sitcom standby of mistaking a real cop for a stripper. It’s all magical. Sure, after six years you’d think Dorothy would be done with Stan and his puka shells. But as intelligent and collected as Dorothy is she still has feelings for the yutz. Other highlights include the visual of Dorothy, Rose, and Blanche toilet papering Harry Weston’s house, Sophia trying to commit suicide in the microwave, and the proposal scene in which Stan asks Dorothy to finger his potato. Who says romance is dead?  GRADE: A 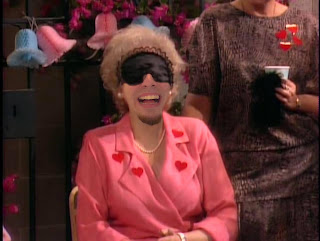