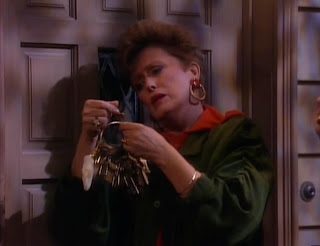 Synopsis: Blanche is worried about her missing on again/off again boyfriend Mel Bushman; Rose auditions for a news reporter job by covering a local dog show.

90s Flashback
Blanche: “What am I gonna do? What on God's green earth am I gonna do?”
Dorothy: “You can stay home tonight. We're gonna watch one of those John Bradshaw specials on PBS.”
Sophia: “Yeah, we're gonna see if we can't get Dorothy's inner child to shut up.”
Blanche: “Good luck.”

Rose: “To tell you the truth, I'm still not ashamed of what I did today. I mean if Deborah Norville stopped for every serious news story that happened around her, she wouldn't be where she is today.”

Animal Alert
Rose [on the TV]: “This is Rose Nylund for Channel 8 News here at the Miami Pet Dog Expo, and I am an eyewitness to something shocking [gunshots] people who look like their dogs!”
Robber: “I said keep quiet and don't move!”
Rose : “That handsome fella you see back there with his hand in the air is Brian Kingsley of Boca Raton. With him is his best buddy Barney, a basset hound you'd swear was a member of his family. As we move closer, you'll notice Barney's collar matches Brian's Rolex… I'm here beneath the information table with Bill Peterson and his similarly profiled bulldog Churchill. It's amazing. That bulldog could be your brother. But I guess you get that a lot.”
Bill Peterson: “Actually I do. [more gunshots] Uh, could we discuss this later?”

Crazy Continuity
Rose had post traumatic stress when their house was robbed. And yet she doesn't seem afraid WHEN THEY'RE HELD AT GUNPOINT.

Shady Pines, Ma
Rose [pretending to interview Dorothy]: “Isn't it a fact that you have a drawer full of retirement home brochures and you're just waiting for the first sign of dribble on your mother's chin to lock her away forever?”
Dorothy: “She - she's kidding.”
Rose: “Your sock drawer, Dorothy. You know, the - the one you-know-who can't reach?”
Sophia: “I knew you were keeping pictures there, but I had no idea. You disgust me.”
Dorothy: “That sock drawer is my business. Look, those times that Ma makes me crazy, I go into my room and have some pretend time, OK?”
Rose: “This is Rose Nylund signing off in a sad, sad situation.”

Lewd Ladies
Blanche: “The truth is Mel makes me feel young and beautiful and special. When we're together, we laugh a lot.”
Sophia: “Why wouldn't you? You're both naked.”

Insult Watch
Blanche: “Well, it's unspeakable, that's what it is. Absolutely unspeakable.”
Dorothy: “Oh, Blanche, are you pretending you just found your first gray hair again?”
Blanche: “Dorothy, just because you have to walk around lookin' like an English lawyer doesn't mean everybody has to.”

Product Placement
Blanche: “Well, so far nothing seems out of place.”
Rose: “Look at this Exercycle. It's never been used.”
Blanche: “Oh yeah, we've been on it.”
Dorothy: “Don't ask, Ma.”

Sassy Sophia
Blanche: “Everything's changed. It's all new and exciting. In many ways, I feel just the way I felt when I was a virgin.”
Sophia: “You mean, the feeling isn't gonna last long?”
Blanche: “Are you implying I lost my virginity at an early age?”
Sophia: “I'm just saying you're lucky Jack and Jill magazine didn't have a gossip column.”

Back in St. Olaf
Rose: “Dorothy's right. You're worrying for nothing. I remember back in St. Ol—“
Dorothy: “Hold it right there, Will Rogers. None of us is in the mood to hear one of those St. Olaf stories.”
Rose: “Well then, here's one against your will. But to show you I'm a good sport, I'll get right to the part that'll make Blanche feel better. Ah. Anyway, everybody in the village hated Ingmar. So we grabbed our torches and climbed the hill to his castle and pounded on the great oak door, but there was no answer. So we got a ladder, climbed up to the window, and we peeked in, and to our relief, there was Ingmar lying on the - oh, wait a minute. He was dead.”

Best of B.E.D.
Blanche: “There's more to Mel and me than just the physical, Sophia. We share things. I couldn't be intimate with just anybody.”
Sophia: “Oh, yeah? What about the guy who painted our address on the curb?”
Blanche: “You make it sound like it was a one-night stand. He'll be back when it's faded.”

Sweet, Single-Digit-IQ Rose
Rose: “The consumer show asked me to test these chemically treated lenses. The theory is they don't fog up when you come in from the cold. Excuse me.” [Sticks head in refrigerator]
Dorothy: “Rose, you wanna run that looking stupid question by us again?”
Rose: “I'm just doing my job.”
Dorothy: “Rose, leave the glasses in the refrigerator, close the door and keep your head out here with us.”
Rose: “How will I know if they fog up?”
Dorothy: “The little man who lives in there who turns the light on and off, he'll tell you.”
Rose: “I'm not in the mood for jokes, especially about the little man, you know he scares me.”

Dorothy Zbornak is My Spirit Animal
Blanche: “Tonight, Mel and I are starting a brand-new relationship. Do you realize how rare it is to find out the person you've been sleeping with is the person you love?”
Dorothy: “No, but you can't go by me, I have morals.”

What, We Can’t Learn From History?
Blanche: “Mel, is that really you?!”
Mel Bushman: “No, it's Claus Von Bulow.”

Literary Intelligentsia
Blanche: “Girls, I do not know what I'm gonna do. I called Mel all last night and all of today. I haven't gotten through to him yet.”
Dorothy: “Oh the nerve. If you wind up having to read a book because of that man.”

The Boob Tube
Rose: “Dorothy, Sophia, I told the news director I was interested in the reporter's position, and guess what he did.”
Dorothy: “A Danny Thomas spit-take?”
Rose: “No, he's giving me an actual news story to cover as an audition.”
[Sophia does a spit-take]

Dorothy: “What is this Bushmania all of a sudden? This is a man you see, what, five times a year? A man you yourself describe as ‘Fred Flintstone with a better car.’”

Reel References
Mel Bushman: “I got a great idea. Why don't you come over to my place? I'm hungry. I'll go down to Wolfie's, I’ll get some pastrami and we can rent Out of Africa.”
Blanche: “We've rented it five times and never made it through to the end.”
Mel Bushman: “I know, but it always works.”

Rose: “Tell me the truth, do these glasses make me look stupid?”
Blanche: “Let’s just say they don’t hide it.”

Rose: “Maybe we better think this over. We don't have any right to go breaking into somebody's home.”
Blanche: “We're not breaking in. I have a key. [Blanche pulls out a keyring with dozens of keys] Let's see. Baldwin, Baxter. Ah, here it is. Bushman. No. Oh, that's Al Bushman. Here we go. Mel Bushman.”

Blanche: “Mel and I were meant to be together.”
Sophia: “I wish I could say the same for your thighs. God, I'm hot tonight.”
Blanche: “I'm not gonna stand for this.”
Sophia: “Take it, Dorothy.”
Dorothy: “But I'll bet you'll lay down for it.”
Sophia: “Well, that was just plain rude.”
Blanche: “Some people just don't know when to quit.”

Sophia: “Look how they pamper these dogs. They eat when they want to, sleep when they want to, go to the bathroom anywhere they - hey, I do have it pretty good. Now, if I could just get you to crack the window when you lock me in the car.”
Dorothy: “Ma, stop it.”

Rose: “This is Andy. He's my cameraman. Andy, these are my friends. Where do you think we should set up?”
Andy: “I'm not sure, Mrs. Nylund. To tell you the truth, this is my audition, too. Um, how about over there?”
Rose: “Whatever you say.”
Andy: ““Whatever you say.”
Sophia: “The blind videotaping the blind.”


Critique:
Yes, yes I know. Who the hell robs a dog show? The guy is a robber, I didn't say he was smart. Dogs do carry lots of money after all. Also, I realize that since it’s a dog show that they’re well behaved, but how was there not one dog that barked? But I digress. There’s a reason this episode is called “Melodrama.” It’s one of the more stupid plots in the sixth season, though not as outlandish as the Cheeseman obviously. Blanche spends half the episode worried about Mel Bushman. Yawn. At least the sight gag with her gigantic key ring made the story worth it. Rose’s story is a little more fun if only for the moment where she pretends to interview Dorothy and exposes her secret stash of retirement home brochures. And Sophia’s meta Danny Thomas spit-take is a fine gag itself, and the second seen on the show. Let’s not forget Blanche spitting Coca-Cola in that Russian guy’s face. What is the deal with this Bushmania after all? Life’s big mysteries. Overall, the episode is fine, with some great lines but one that rarely needs to be revisited often.  GRADE: B 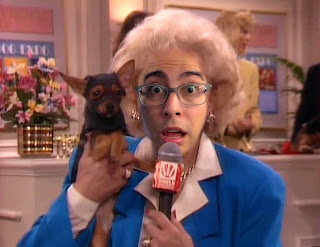