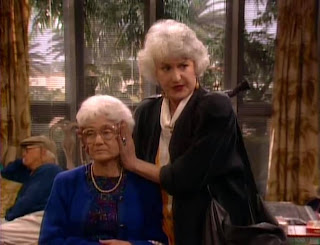 Synopsis: Sophia works as Activities Director at Cypress Grove Retirement Home, but it’s just a clever ruse by Dorothy; Blanche and Rose are recruited to model for a Penny Saver flyer.

80s Flashback
Rose: “So life threw the dumb country girl a crumb for once. I mean, you're sexy and beautiful all the time. Let's face it. You have Bette Davis eyes… and Freddy Krueger hands.”

90s Flashback
Sophia: “Oh, look who's here. Everybody remembers my daughter Dorothy. Or maybe you know her by her Indian name, ‘Dances With Nobody.’”

Let’s Get Political
Dorothy: “Oh, Blanche, haven't you had enough problems with photographers? Remember the last time? Sure, the pictures turned out fine, but it cost your friend his party's nomination.”

Take Me Out to the Ballgame, Stanley
Blanche: “Can you believe it? This is the most humiliating thing that's ever happened to me.”
Dorothy: “Ah, how quickly you forget the 1964 Tokyo Olympics.”
Blanche: “Big deal. 80,000 people had to wait twenty minutes. The torch eventually got there, didn't it?”

Animal Alert
Dorothy: “Where have you been?”
Blanche: “Well my plan with the truck drivers didn't work, thanks to Little Miss Strait-laced here, so I have been in every front yard in a six-block radius gettin' these Penny Savers from the paperboys.”
Rose: “She was a woman possessed, Dorothy. Caught some on the fly, scaled a couple of roofs. And she had a brilliant idea how to avoid guard dogs.”
Dorothy: “You made her wear lamb chops again, didn't you?”
Blanche: “It's not like they slow her down.”

Shady Pines, Ma
Dorothy: “Ma, look at this place. It's lovely.”
Sophia: “Don't get any ideas, Pussycat.”
Dorothy: “I'm not getting any ideas, Ma.”
Sophia: “You're scheming. Remember Shady Pines, Dorothy? ‘Honest, Ma, this is the way to the new Dairy Queen.’”

Sophia: “Shady Pines - now, there's a home. Luxury suites, tennis tournaments. Want a massage? Dial nine. And the food. The filet mignon...”
Dorothy: “Oh, really, Ma? Shady Pines had filet mignon?”
Sophia: “One. They'd throw it in the pit and make us fight for it.”

Insult Watch
Sophia [to Dorothy]: “Some of those people stayed in front of that TV for eight straight hours. Of course, throw in a bag of cheese corn, and I just described your Saturday nights.”

Blanche: “Oh, look, they have airbrushed liver spots all over us.”
Dorothy: “Tell me about it. You guys look like you should be barking on the front seat of a fire engine… I really would sue.”

Tales from the Old South
Blanche: “I think the worst part about getting older is that overwhelming sense of, where did the time go? I mean was it really that long ago I was just a little girl?”
Dorothy: “Oh, why guess? Lift up your chin, and we'll count the rings.”
Blanche: “Dorothy, I was about to share with you a significant memory from my youth. It was the evening my mother gave birth to Clayton. In the spirit of the happy occasion, Big Daddy and a few of his cronies tied one on and went carousing through the streets of Atlanta, looking for some trouble. Just then, as luck would have it, who rounded the corner but two smart-mouthed New York lawyers. So, one thing led to another, and, well, Big Daddy and his friends ended up sort of skimming them across Higgins Pond. It was all in good fun. Least that was their defense. Anyway, that was the night prohibition started.”
Dorothy: “Blanche, prohibition started in the '20s.”
Blanche: “Oh, I'm sorry. I meant probation. Big Daddy went on probation.”
Dorothy: “And, uh, the point of this sordid song of the South?”
Blanche: “Just that sometimes a daughter has to look after her own parent, as unnatural as that may feel.”

Product Placement
Blan“Oh, girls, it finally happened. The most wonderful thing happened to me at the drug store today.”
Rose: “Oh no. Dr. Scholl was there in person, and I missed it!”
Blanche: “Rose, get new heroes.”

Sassy Sophia
Mr. Porter: “That's Smokey. He fancies himself a ladies' man. Sort of the, uh, the rooster of our little henhouse. Whatever you do, don't dance with him. He'll put the moves on anybody.”
Sophia: “Uh Smokey, I want you to meet my daughter.”
Dorothy: “MA!!”

Back in St. Olaf
Rose: “Well, it wasn't unnatural in St. Olaf. We not only took care of our old people, we revered them, honored them, put them on a pedestal. 'Course, that's how we got to be the broken hip capital of the Midwest.”
Blanche: “That's a beautiful story, Rose. Very inspirational.”

Best of B.E.D.
Blanche: “Oh, Rose, come here, sit down. Listen, I just got off the phone with the Penny Saver. Now, I think I have an idea, OK? They have six delivery trucks. By sheer coincidence, I know two of the drivers. I'm not worried about them. They won't show my picture if I don't show theirs. Now, as I see it, of the four remaining drivers, only Agnes is a real problem. Now, Rose, here's a part of the plan you may not like…”

Rose: “Can you believe it? I'm beginning to think Blanche is hung up on her looks.”
Dorothy: “Boy, you don't need lightning to strike you.”
Rose: “No, thanks. Not again. Once was enough.”
Dorothy: “An extra piece of the puzzle.”

Lesbian. Lesbian? LESBIAN??
Blanche: “Now we have to stop those Penny Savers. Come on let's go see if we can get your hair greased back and find you a flannel shirt.”

From Feud to Food
Lucille: “Oh, great, great party, Sophia, but where's the junk food?”
Sophia: “I've got a great idea for free pizza. Let's call up that 30-minute pizza place, tell them we're a bunch of college kids, and when the guy gets here, one of us grandmas will open the door and say, “What took you so long??’”

Dorothy Zbornak is My Spirit Animal
Dorothy: “Now I have to go to work, and I don't want you to worry about me. So I'm going to say to you what you said to me the very first day you dropped me off at school. ‘See if you can find someone who looks clean to drive you home.’”

Blanche: “Do you know what I think the worst part of getting older is?”
Dorothy: “Your face? Rose's hands?”

What, We Can’t Learn From History?
Sophia: “I haven't had a paycheck since 1942, and then I blew it all on war bonds.”
Dorothy: “Well, at least you got it back.”
Sophia: “No, Italian war bonds. I fell for their slick advertising campaign: ‘Buy Italian war bonds - the quickest, surest, fascist way to double your money.’”

The Boob Tube
Dorothy: “Cypress Grove has a great reputation. Did you see the story they did about it on 60 Minutes?”
Sophia: “No.”
Dorothy: “Short piece. It was just Mike Wallace saying, ‘Sorry I bothered you.’”

Reel References
Blanche: “I am going to be a model. There I was, sitting at the lunch counter, and just like Miss Lana Turner, I was discovered. Well, not exactly like Miss Lana Turner.”
Rose: “You mean she was sipping a soda and you were scarfing down your usual lumberjack breakfast.”
Blanche: “Oh, Rose. Silly, silly, water-retaining Rose.”

Blanche: “Oh girls, what a glorious day. I just feel so pretty and alive and young as a teenager.”
Dorothy: “Oh, that's terrific, Blanche. By the way, you got a phone call this morning from your grandson. He got his driver's license.”

Blanche: “Afternoon, Dorothy. My, don't you look lovely today?”
Dorothy: “Why, thank you.”
Dorothy: “Oh. And don't you look, uh, beautiful, vivacious, exquisite and, uh, uh let's see. Breathtaking?”
Blanche: “Dorothy, you know, at some point I'm going to have to start questioning your sincerity. When we get to that point, I'll let you know.”

Rose: “Imagine. These hands, that once reached inside a chicken for a breech birth, will soon grace the pages of a Penny Saver.”
Dorothy: “You've come a long way, baby.”

Sophia: “We older folks have to exercise our minds, too. And don't you forget it, Gloria.”
Dorothy: “Ma, Gloria is your daughter in California.”
Sophia: “Uh, I-I knew that. A mere dramatization to make my point, uh… pal.”

Sophia: “I'm not going to sit here while people are forced to throw in the towel. Have you ever seen what happens to a person when their brain is allowed to disintegrate and their minds turn completely to mush?”
Rose: “Hey! My middle finger's the longest!”

Blanche: “Dorothy, it finally came - the advance copy of our PennySaver ad.”
Rose: “Bet my hands are better looking than your face.”
Blanche: “Bet my face is better looking than your hands.”
Dorothy: “Oh, ladies, ladies, can't we settle this with pistols?”
Blanche: “Oh, my God!!”
Dorothy: “What's the matter, Blanche?”
Rose: “Oh, my God!”
Dorothy: “Oh, come on, no matter what – Oh my God! ‘Does your face look like this? Do your hands look like this? You need Ponce de Leon Anti-Aging Cream…I'd sue.”

Critique:
I refuse to believe that Shady Pines had tennis tournaments and gave out massages. I do, however, believe they probably had one filet mignon that they’d throw into a pit and make the residents fight for it. In fact, I want to watch that fight right now. But I digress. This is a great episode with many memorable moments. It’s hard to believe that Sophia would even come near a retirement home, let alone want to work for one. But I enjoy all her interactions with the residents. Rose and Blanche’s B story about modeling in the Penny Saver is memorable for several reasons. First of all, I love a good Freddy Kruger reference. It really shows how much the Elm Street series had seeped into the popular culture by this point. And I really appreciate a good lesbian joke; who doesn’t wanna see what Rose would of looked like with her hair slicked back and all tricked out in flannel? (Let alone Blanche scaling roofs and Rose running down alleyways, lamb chops dangling from her waste, being chased by dogs.) And finally, the next time I’m in Hialeah I’ll be sure to check out their cappuccino on Sophia’s recommendation. And of course one of Cypress Grove’s residents is the same familiar actress who played Sophia’s friend Lillian... talk about being typecast. GRADE: A- 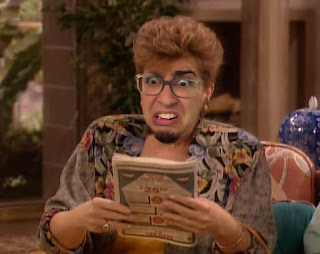