What a Difference a Date Makes S6E22 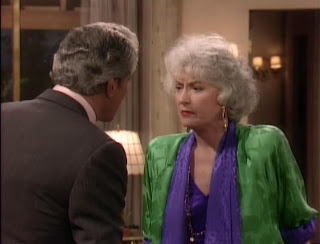 Synopsis: Dorothy confronts the man that stood her up at her senior prom; Blanche goes on a diet.

That’s What She Said
Rose: “I needed something to wash down the little pie. It was so fishy!”

Shady Pines, Ma
Dorothy: “Ma, I'm going to ask you a question, and however you answer, I'll believe you. Did you tell John Noretti to go away the night of my senior prom because you didn't like the way he was dressed?”
Sophia: “Well—”
Dorothy: “LIAR!! You knew John showed up that night, and you didn't tell me. And you didn't want me to go out with him tonight because you knew he'd bring it up.”
Sophia: “I can explain. Just don't lock me away in another ill-equipped nursing home.”
Dorothy: “I promise nothing.”

Insult Watch
Blanche: “Who's John Noretti?”
Dorothy: “He's a guy who humiliated me.”
Rose: “Could you narrow it down a bit, Dorothy?”

Sophia: “Dorothy, I'm begging you. Don't go out with this guy. He hurt you once, he'll hurt you again.”
Dorothy: “I am not going out with him.”
Rose: “But you said you were gonna make him suffer. Don't you have to date a man to do that?”

Sophia: “Blanche, I want to tell you something. I've never weighed more than 100 pounds on any day of my adult life. And because you're my friend, I want you to sit down, and I'll share with you that secret.”
Blanche: “Tell me, Sophia.”
Sophia: “I was born that way. I could eat anything and never get fat. Did anyone ever tell you you look like George Kirby?”

Product Placement
Blanche: “Blanche Devereaux's goin' on a diet.”
Sophia: “Could you hold off until tomorrow? I got some Sara Lee stock I'd like to unload.”

Sassy Sophia
Blanche: “See, I'm on this drink-it-off diet. You have two shakes and a sensible meal every day, you lose weight the fast easy way.”
Sophia: “I prefer the Italian diet. You drink a bottle of wine, make a smart remark, then get your jaw wired.”

Back in St. Olaf
Rose: “I never got to go to the junior prom in St. Olaf.”
Sophia: “How come?”
Rose: “It was just for people named Junior.”

Best of B.E.D.
Rose: “You weren't married in a white dress?”
Blanche: “Oh, Rose, come on. I mean it's one thing to hear snickering when you walk down the aisle, but me in white? Even I couldn't keep a straight face.”

From Feud to Food
Blanche: “Time for my shake.”
Dorothy: “Honey, how you doin' with this diet?”
Blanche: “Oh, no problem. Piece of cake. Nice big piece of chocolate cake. Devil's food, smothered in whipped cream and coconut flakes. And a lobster.”

Dorothy: “Oh, God, that's John. Oh, I just hope I can be mean enough.”
Rose: “Dorothy, do that thing you do to me in the morning when I try to take a piece of bacon off your plate.”

Dorothy Zbornak is My Spirit Animal
Rose: “Oh, Dorothy, a man called for you while you were out.”
Sophia: “Finally. Now we can break out that bottle of champagne we've been saving.”
Dorothy: “Ma.”
Sophia: “Come on, Dorothy. We might not get another chance.”
Dorothy: “Oh, sure we will. We can just serve it at the wake.”

Literary Intelligentsia
Rose: “Wait, can I have those gummy bears?”
Blanche: “They are good, aren't they? Oh, I don't eat 'em.”
Sophia: “Then why do you want 'em?”
Rose: “To play army. And sometimes I like to line 'em up around my bed and pretend I'm Gulliver.”

The Boob Tube
Dorothy: “Oh, Ma, I said some terrible things to you, and I'm sorry. I'm responsible for all the decisions I made in my life, and if my life didn't turn out perfectly, well, whose has?”
Sophia: “Mary Ann Mobley comes to mind. I mean she gets to sleep with Gary Collins every night. Every night.”

Reel References
Sophia: “The last time you went on a diet, you turned into that guy from Silence of the Lambs. You did everything but butter my face.”

Golden Quotes
Dorothy: “I'm talking about me. Oh, my revenge will be to make John feel as bad as he made me feel. I want him to see me, see my life, so he'll know exactly what he missed.”
Blanche: “She doesn't know a whole lot about revenge, does she?”

Dorothy: “It's time that John Noretti learned a lesson. That I am not that same little girl whose head can be turned by a pair of beautiful eyes and a killer smile. [doorbell rings] Now.”
John Noretti: “Dorothy. Dorothy, look at you. You're as beautiful now as you were then. How have you been?”
Dorothy: “I LOVE YOU!”

Dorothy: “Hi, Maaaa.”
Sophia: “Hi, Dorothy. Bye, Dorothy.”
Dorothy: “Ma, come back. I wanna sit and have a little talk.”
Sophia: “Why?”
Dorothy: “Come on, now, would it hurt to spend a little time with your daughter?”
Sophia: “That remains to be seen.”
Dorothy: “Uh Rose, would you excuse us just for a minute?”
Rose: “Sure. I know that tone of voice. [singing] Somebody's gonna get it.”

Dorothy: “I remember the time Stan and I went on that weight-loss- through-sex diet. The idea being every time you felt hungry, you would substitute food with some sexual activity.”
Blanche: “Did it work?”
Dorothy: “I gained 18 pounds.”

John: “It was an enchanting evening.”
Dorothy: “Enchanted Evening. That was the theme of that prom that we never got to.”
John: “Little more romantic than the theme they had tonight.”
Dorothy: "Well, Wear A Condom is more than a prom theme. It's sort of become the school slogan.”
John: “It's catchy.”
Dorothy: “Oh, I wish Stan had gone to that high school.”

Sophia: [waking up as Dorothy kisses her head]: “Don’t take me death, don’t take me!”

Critique:
So, how many proms did Dorothy allegedly go or not go to exactly? One time Dorothy wore her tennis whites to the prom and ended up as the butt of Trudy’s prank (escorted by her brother). Another time Dorothy has to remind Sophia that she didn’t go to her prom ("Clinton Avenue Memories"). And yet another time Sophia reminds Dorothy that she pretended she was dating the quarterback of the football team and slow danced with a rake in the basement (though it was part of Blanche's dream). Anywho, let’s talk about Blanche’s B story for a bit first. To begin, if Blanche diets every year to fit in her wedding dress every year on her anniversary how hos no one seen her do it? Rose acts surprised that Blanche’s wedding dress is red. But obviously it’s to make the joke about Blanche not being able to wear a white wedding dress so I’ll allow it. That dress, by the way, all 37 seconds it’s onscreen, is easily one of the most memorable outfits Blanche wears in the entire series. The scene in the kitchen when Blanche has a complete hunger breakdown is fantastic, more so is Rose priceless reactions when she realized she’s eaten all of Blanche’s fishy diet food. Then there’s Dorothy’s story line which deepens once we find out it was Sophia who was the catalyst for John not showing up which made Dorothy date Stan. Highlights include John and Dorothy’s date at a medieval restaurant that looks eerily like the restaurant that Jake took Blanche to. To say they're overdressed is an understatement. I also don’t understand why men who are “in town” take the ladies out to eat as if they even live in the area. But I digress. Dorothy’s father shows up as a jester and a guy keeps singing the theme to 'Gilligan’s Island.' The jokes, especially the insults, come fast and lose and that’s just how I like it. And lastly, the visual of redwood Dorothy sitting on Sophia’s lap is, in a word, priceless. It’s a solid half hour of The GG. GRADE: A- 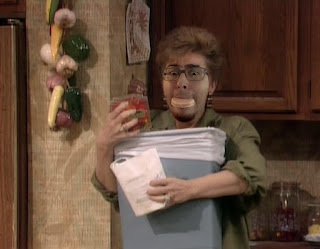