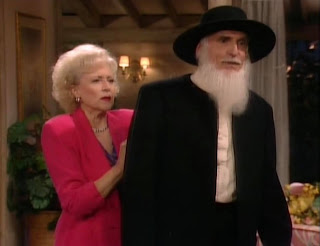 Synopsis: Miles’ Witness Relocation Program subplot rears its wacky head again when it turns out the man Rose is dating is the Cheeseman; Blanche tries to get into the Daughters of the Old South; Sophia loses her glasses.

90s Flashback
Sophia: “Hey, it's the Cheeseman.”
Karl: “Come on, get in here, both of ya.”
Blanche: “Sophia, you recognize Karl as the Cheeseman?”
Sophia: “You don't? The man's been on America's Most Wanted at least six times.”
Karl: “The last episode was the highest rated ever. Ever.”

Crazy Continuity
If ‘Miles Webber’ was always an alias why does he keep this name after The Cheeseman is caught and nothing of this nonsense is ever mentioned again?

Musical Moments
Blanche: “I'm seven-eighths Southern. That's more than enough.”
Dorothy: “And if they don't let you in, instead of saying ‘fiddle-de-doo,’ well, you can always switch to ‘Deedle didle deedle dum.’”

Let’s Get Political
Daughter of the Old South emcee: “Well, thank you, Evelyn and Margaret, for that gripping and realistic reenactment of the defeat of General Burnside's troops at Fredericksburg.”
Dorothy: “It's hard to believe you couldn't get federal funding for this.”

Take Me Out to the Ballgame, Stanley
Daughters of the Old South emcee: “We now call Blanche Devereaux.”
Sophia: “Dorothy, I can't see a thing. What's happening now?”
Dorothy: “The Harlem Globetrotters just took the court.”

Shady Pines, Ma
Karl: “All right, all you gals are gonna get locked up in a closet, and us boys are going for a little walk.”
Sophia: “Wow. Were you ever activities director of a place called Shady Pines?”

Zbornak Zingers
Sophia: [after looking through binoculars] “Well, I'm off.”
Dorothy: “That would be my diagnosis.”

Insult Watch
Dorothy: “Let's analyze this for a moment. You're now what, about 200 years old?”
Sophia: “About.”

Tales from the Old South
Blanche: “I remember, growin' up in Atlanta, how all of us girls used to pretend to be Confederate belles, and we'd receive gentleman callers. Got to be like a competition. In fact, I once received seven callers in one evening.”
Dorothy: “I'm just thinking out loud, but, uh, isn't Atlanta where the Center for Disease Control is?”
Blanche: “Coincidence.”

Blanche: “Those small-minded peckerwoods aren't real Southerners. I am a real Southerner. Real Southerners are compassionate people. They're wise and gentle, and they sit around on porch swings, regaling with stories of Abraham and Moses and, all the other people who worked on the plantation.”

Product Placement
Dorothy: “Now wait a minute! You can't just come into this house waving that gun around. Although it is a very nice one. What is this, a Colt?”

Best of B.E.D.
Blanche: “I just want to go on record as saying I am against this. That Cheeseman character could be following Miles, and there's no telling what he would do to me for information!”

Barbara: “Alright I'm gonna take this creep out front and read him his rights. Somebody call the station and tell 'em to get here, and I need some handcuffs, right away.”
Blanche: “Oh. Oh, OK, you can borrow mine. But please be careful with them, they're a gift.”

[Karl enters wielding a gun]
Miles: “You! How did you find me?”
Karl: “Time to say goodbye, buddy boy.”
Rose: “Karl, Miles, as flattering as this is, I, I don't want you fighting over me.”

Barbara: “All right, Cheeseman, you're under arrest.”
Rose: “You told us you didn't have a gun. You lied.”
Barbara: “To a bad guy. It's OK to lie to a bad guy.”
Rose: “You see that? There's so many things we, as the public, don't understand.”
Lesbian. Lesbian? LESBIAN??

Dorothy Zbornak is My Spirit Animal
Karl: “Excuse me, folks. I've gotta make a quick phone call. Rose, would you mind getting me some punch?”
Blanche: “He's gonna be late for the initiation ceremony.”
Dorothy: “Oh, take it easy Feldman.”

What, We Can’t Learn From History?
Blanche: “My point is, I am made up of many ingredients, but perhaps that is what gives me my uniquely American flavor. Yes, for I am an American, and I'm leavin'. I don't need your lousy club to make me feel special… oh, please??”
All: “NO!”
Blanche: “Oh, you lost the war. Get over it!”

The Boob Tube
Rose: “Oh, Karl is quite a guy. Lately I've been dreaming about him at night, not Miles. Although I do have one dream that both Karl and Miles are in.”
Blanche: “Ohhh! And??”
Rose: “OK. And Captain Kangaroo!”

Golden Quotes
Barbara: “… nobody reported any lost glasses.”
Sophia: “Not lost. Stolen. I want cops on this. Big, burly, steroid-crazed cops.”
Blanche: “Ooo. Sophia!”
Sophia: “Oh, fine, get one for Blanche, too. Throw it on my tab.”

Dorothy [as Sophia walks in with sunglasses]: “Ladies and gentlemen, Roy Orbison.”

Dorothy: “Ma, where did you get those glasses?”
Sophia: “They're an old pair of Pop's, but at least they've got prescription lenses.”
Dorothy: “I know you can't possibly see through them. Now take them off before you hurt yourself.”
Sophia: “No, they're great. I see just fine. [looking at Blanche] Who's the black guy?”

Miles: “Well, I'm Amish, Rose. That's my new identity in the Witness Protection Program. See, I'm an Amish man. I live on an Amish farm. I carry wood, I dig holes, and I milk things. And, to be frank, it sucks.”

Blanche: “I don't know what I'm gonna do. [seeing Miles] Boy, you find out you're a Jew with a dilemma, and these rabbis just come out of the woodwork.”

Blanche: “Dorothy, I belong in this club. Why, I'm just as Southern as, as the fruit of a scuppernong arbor growing proudly by the lazy Mississippi.”
Dorothy: “Lawdy, Lawdy, are you full of it.”

Blanche: “I can't do it. I— daughter of Feldman. I'm a Feldman, damn it… of Buffalo.”
[audience gasps, woman faints]

Blanche: “Oh, I knew all along it was a bad idea to let Miles stay here. Oh I'm too young to be struck down by a madman's bullet. I've gotta find some way outta this. [doorbell rings] I'll get it!”
Karl: “No one moves! And no one makes a sound. We all stand still until they leave. [Sophia enters] Don't make a move, old lady!”
Sophia: “Nice way to talk to your mother, Pussycat.”

Critique:
Burning question: Is the Daughters of the Old South a hate group? And go! Who would have thought storylines like this in the GG would be so relevant today? It’s interesting to note later on, an episode of The Golden Palace actually takes a serious dive into the confederate flag issue and what it symbolizes to different people. But as Blanche would say, we don’t have to get into any of that. In a rare bit of actual continuity, Miles is back; aka Nicholas Carbone aka Samuel Plankmaker aka cruise-ship Arnie perhaps?? (Who the hell knows!) I can almost forgive all of this bizarre nonsense because Mitchell Hurwitz’s writing is top notch here and shows a glimmer of the wackiness that he’ll eventually bring to “Arrested Development.” For example, the comedy mileage he gets out of Sophia’s lost glasses subplot is simply astonishing. This was the type of B story that Sophia used to have in the early seasons but never really had a purpose except to give Estelle Getty something to do. Here she milks the comedy for all it’s worth most notably in the scene where she mistakes Blanche for a Black guy. Also, Rose’s idiocy reaches the tipping point here; it’s always good for a laugh but jeesh. Her conversation with Karl outside the front door is Forrest Gump level stupidity. The whole episode is ridiculous. Everything from the nutjobs at the Daughters of the Old South banquet to Miles nonchalantly grabbing the gun out of Karl’s hand as Barbara “subdues” him. She doesn’t even have handcuffs. I refuse to believe a big-time gangster like that couldn’t get away. And let's not even get into how Dorothy still insists on pronouncing "program" as "progrim." But I digress. Yes this episode is as ludicrous as it his hilarious but it’s too crazy not to love. GRADE: A 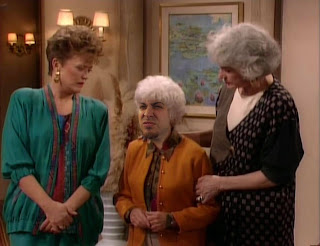