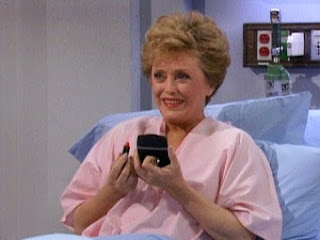 Synopsis: Blanche has to have pacemaker surgery and then decides to give up sex; Rose is busy testing weight-loss products for work.

90s Flashback
Dorothy: “Hi, Ma. What you doing?”
Sophia: “Thinking.”
Dorothy: “About what?”
Sophia: “About wind, water, rocks. Man's place in the delicate balance of nature's harmony. Where we're going. Where the road ends.”
Dorothy: “Gee, Ma, I never knew you were so philosophical.”
Sophia: “I'm not. It's those damn Infiniti commercials. They're driving me crazy.”

Crazy Continuity
Rose says when she had trouble sleeping she'd count sheep (and Dorothy tells her she doesn't want to hear the story if there are real sheep in the story which there are) but in the Season 3 episode “Brotherly Love” Rose says she can't count sheep because she's allergic to wool.

Musical Moments
Rose: “Over there/Over there/Send the word, send the word over there/That the Yanks are coming/The Yanks are coming--”
Dorothy: “That is the lullaby that your mother sang to you?”
Rose: “Well, it was the only song she knew. During World War I she gave out donuts and coffee to the doughboys before they boarded the trains for Europe. It works, truly. She said no one can be scared when they hear that song, except maybe the Kaiser.”

Let’s Get Political
Sophia: “Dorothy, have you been fooling around with my Tip O'Neill calendar?”
Dorothy: “No, Ma, I haven't.”
Sophia: “Come on! I'm missing March. It's the month where he's playing volleyball with Jesse Helms.”

St. Olaf Vocab
The St. Olaf “I Can't Believe This is Cheese” Diet: You eat nothing but rice

That’s What She Said
Blanche: “If everything's as bad as he thinks it is, he wants to put a pacemaker in me.”
Sophia: “Everybody's got a nickname for it.”

Lewd Ladies
Blanche: “That madman wants to rip me open from stem to stern.”
Sophia: “Your two favorite parts.”

Picture It
Sophia: “Hey, it's never easy to go without. I remember when my mother-in-law came to stay with Sal and me when we were first married. For two months Dorothy your father and I didn't have sex.”
Dorothy: “Why not, Ma?”
Sophia: “She slept in between us. It was a very small place. Have you ever seen an Italian after he's gone without?”
Dorothy: “Hm, no.”
Sophia: “That's because your father was the only one.”
Rose: “Well she finally left, didn't she, Sophia?”
Sophia: “Yeah. I'll never forget that day. Your father stayed home from work. Unfortunately, I couldn't get the day off. I don't know what he did, but he was happy when I got home.”

Zbornak Zingers
Blanche: “I know this sounds crazy, and if it hadn't happened to me, I wouldn't believe it either, but while I was being operated on, I had an out-of-body experience. I was floating, lookin' down at myself. It was like, it was like--”
Dorothy: “Like the mirror on your bedroom ceiling?”

Insult Watch
Dorothy: “Rose, what's that supposed to be?”
Rose: “A flab stimulator. You hook these things to your muscles. They give out an electric charge and help get rid of unwanted fat deposits.”
Sophia: “Does it come in a hat?”

Sassy Sophia
Blanche: “He wants to match the heartbeats that this records to my activities, so, for the next 24 hours, I have to write down everything I do.”
Sophia: “And you're not embarrassed to have him read that smut?”

Back in St. Olaf
Rose: “Since Charlie was a traveling salesman, sometimes I'd be alone for weeks. I used to have so much trouble sleeping, I tried counting sheep.”
Dorothy: “Rose, if there are real sheep in this story, I do not wanna hear it.”
Rose: “OK.”

Best of B.E.D.
Blanche: “You know, I'm really starting to care about him, and I wouldn't want him worrying about my recording his performance. You know how fragile men's egos are. One little thing like screaming out the wrong name, and they go all to pieces.”

Sweet, Single-Digit-IQ Rose
Blanche: “I don't know what to expect of myself with this thing in me. I just keep remembering how you're not supposed to overload electrical outlets.”
Rose: “Maybe you just shouldn't make love when you're wet.”

Reel References
Dorothy: “I can't believe it. Blanche has gone without for two weeks. I mean, that's like Raymond Burr saying, 'No gravy!'”

Golden Quotes
Rose: “You wouldn't believe the length people go to just to drop a few pounds. I heard about one woman who even had her jaw wired shut.”
Dorothy: “Oh. Is that something that you'll be testing, Rose?”

Rose: “What's wrong with your heart?”
Blanche: “Oh, nothing. Dr. Stein just thought it sounded a little irregular. I think it's 'cause I was so uncomfortable sittin' there topless with a strange man.”
Dorothy: “Next time, just pretend you're at home and he's the bug guy.”

Rose: “Sophia, It's been wonderful watching you take care of Blanche all week.”
Sophia: “I feel like a regular hospital worker.”
Rose: “Ah, that's nice.”
Sophia: “Yeah. I just took all the money and jewelry out of her nightstand.”

Blanche: “The time has come for me to re-evaluate my life, for me to take stock of myself. I just know that there's a part of me that nobody's ever seen.”
Sophia: “I find that hard to believe.”
Blanche: “If a 5,000-year-old Indian shows up, tell him I wanna know more about his people.”

Rose: “Where's Blanche?”
Dorothy: “She's out on a date with Simon. It's her first time out, so who knows when she'll be home.” Sophia: “Checkout time is usually noon.”
Dorothy: “You know, Blanche has been without a date for weeks. I know that because all the pictures on my wall are straight.”

Simon: “I cannot believe how much I've missed this little girl.”
Sophia: “This guy is growing antlers.”

Rose: “Your date is over??”
Blanche: “You sound surprised.”
Dorothy: “Well, it's just that your dates usually end with a little... pillow talk.”
Sophia: “Yeah like, 'What did you say your name was again?'”

Blanche: “I've made a decision. Blanche Devereaux is giving up sex.”
Sophia: “And what does that do to the morale of our boys overseas?”

Blanche: “It was not an easy decision, but it's best that I retire from the sexual arena undefeated. Time I hung up my gloves.”
Rose: “Gloves?? Boy, you do practice safe sex.”

Dorothy: “Ma, I said I was sorry.”
Sophia: “The least you can do when we're gonna see a movie is say it's a foreign film.”
Dorothy: “What is the big deal?”
Sophia: “I had to stand at the front of the screen just to read the subtitles and all that running back and forth to complete a sentence almost killed me.”

Blanche: “Over there/Over there… No, I said over THERE.”

Critique:
This episode is a double-entendre hot zone. Popsicles, growing antlers, pacemakers. It's all here! This truly delightful Blanche-centered episode is a perfect showcase for the great Rue McClanahan. Probably one of her best performances since her Emmy-winning Season 2 opener “End of the Curse.” Blanche is always great when the writers force her to confront real life square in the face. Here she has issues with her heart and thinking a pacemaker is practically an electrical appliance (not unlike the heatin' pad Dorothy was using) she's afraid that too much passion will basically make her heart explode. Sure it's borderline crazy, but you know how Blanche gets. Rose's storyline about testing weight-loss products is a showcase for some fun physical bits including those memorable blow up “vacuum slacks.” How exactly a pair of pants and vacuum clean is aupposed to "inhale the fat from your body" is beyond me. Sounds dangerous. It's utterly silly but a perfect reflection for the sheer hell going on inside the mind of Blanche Devereaux. The dialogue is on point here with line after line of racy one liners. And two words: Over. There. I have no complaints about this one. GRADE: A