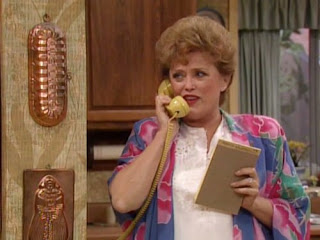 Synopsis: The girls juggle three storylines: Blanche rents a Mercedes to attract men, Mile's daughter doesn't approve of Rose and Miles' relationship, and Sophia has been hoarding checks from the government that were sent by mistake.

90s Flashback
Sophia: “Have you guys ever heard of Totally Hidden Video? Well underneath this gray wig is comedian Kaye Ballard. Thanks for being on our show.”

Crazy Continuity
Later we find out Miles is in the Witness Relocation Program. So really, who the hell is Caroline??

Let’s Get Political
Dorothy: “Now, just a minute. I have my own problems. I'm dealing with a mother who stole money from the government.”
Sophia: “Come on! It's not like I'm an elected official.”

St. Olaf Vocab
Gerkinflunken – Rose's uncle who was the owner of St. Olaf's most famous haberdashery. He came up with the slogan, 'You don't have to be Amish to look Amish.'


That’s What She Said
Blanche: “You can tell a lot about a man by the way he drives.”
Dorothy: “You know, that's true. Sometimes Stan couldn't even get the key in the ignition.”

Take Me Out to the Ballgame, Stanley
Dorothy: “Where'd you get the money?”
Sophia: “Is that what you say to someone who bought you a gift?”
Dorothy: “Ma, I asked you a question.”
Sophia: “I never told you this, Dorothy, but I'm a special friend of Phil Rizzuto.”

Lewd Ladies
Dorothy: “Ma, why don't you take a moment and think what America has given you?”
Sophia: “Besides this 170 grand? All right. All right, all right, I'll send it back. All of it?”
Dorothy: “Yes, Ma, all of it.”
Sophia: “OK, OK. I just hope they want it back after an 83-year-old woman rolled around in it naked.”

Sassy Sophia
Sophia: “The government is being kinder and gentler by sending me a lot more social security checks than they used to.”
Dorothy: “The computer made a mistake. Ma, that money doesn't belong to you. Now how much are we talking about?”
Sophia: “Enough to have you rubbed out if you rat on me.”

Best of B.E.D.
Blanche: “My first appointment's here, right on time. I've been out there watching him. He's been looking at the car and smiling. I feel just like a fisherman with a new lure.”
Dorothy: “You catch 'em, you clean 'em! Blanche, aren't you embarrassed, going through all this subterfuge just to get a man?”
Blanche: “A man? I'm planning on getting a six-month supply!”

Sweet, Single-Digit-IQ Rose
Rose: “Your father tells me you're a classical musician. What do you play?”
Caroline: “The English horn.”
Rose: “I didn't know horns had nationalities. But I guess it makes sense, if jumping beans can be Mexican and fire drills can be Chinese and flies can be Spanish!”

Literary Intelligentsia
Miles: “We saw a marvelous production of The Glass Menagerie.”
Dorothy: “Oh that is one of my favorite plays.”
Rose: “Frankly, I was a little disappointed.”
Miles: “Really?”
Rose: “Yeah. When you told me you were taking me to a revival of Tennessee Williams, I was expecting something more along the lines of a seance.”

Reel References
Dorothy: “Morning, Ma. You sleep well?”
Sophia: “No. I had that recurring nightmare – you know the one where I'm in bed with Warren Beatty and he says, 'Sorry, this is too sick even for me.'”

The Boob Tube
Miles: “Rose, I have never met anyone like you.”
Sophia: “Check the cornfield on Hee Haw.”

Golden Quotes
Blanche: “Don't worry about it honey. Men will be over, but they'll be in and out all day.”
Dorothy: “Don't say it, Ma.”
Sophia: “I have to Dorothy. At my age, when you don't say it, it can back up on you and come out some other way.”

James: “How much mileage has she got on her?”
Dorothy: “Let's just say she's been around the block.”
James: “...I can't believe anything that beautiful is so cheap.”
Sophia: “I'm cramping up!”

Blanche: “Boy, Mother Devereaux was dead set against me marrying George. She wanted her little boy to marry a virgin.”
Rose: “How did she know you weren't?”
Sophia: “Maybe it was all those 'Honk if you've had Blanche' bumper stickers.”

Blanche: “Caroline, you think your daddy has become involved too soon after your poor mother's demise, but, honey, a year is more than respectable. Why, I've had men call me when their wives were in intensive care.”

Critique:
Ok before I get into it. What exactly is the vaccine that's in Rose's birthday cake? Discuss amongst yourselves, I'll wait. Rabies. It's definitely rabies. But I digress. Holy cow I think this one of the most underrated episodes. It's not particularly memorable. Because they don't go on a game show or go to a murder mystery weekend. But it has really snappy dialogue and truly hilarious moments. Most people remember it for being the one where Miles' daughter is a bitch. Which is true of course, but also remember that soon we'll find out that Miles in the Witness Relocation Program and my theory is that Caroline is just an actor. There's a reason she wants Rose to stay away from Miles after all. Anyways. These storylines are great. OF COURSE Blanche would rent a Mercedes just to attract eligible men. There are so many great automotive/sexual double entendres it's hard to keep track. I'd like to know how Blanche got away with falsely reporting her Mercedes stolen. Probably the same thing that happened to Dorothy when she reported her best piece of crystal stolen in “One For the Money.” Sophia even gets in on the fun as she's been hoarding money from the government. She also says she rolled around in it naked. There's a little part of me that kind of wants to see that. Actually nevermind, that's too sick even for me. GRADE: A-
Posted by Chris at 4:12 PM