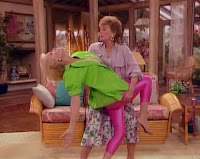 Synopsis: Sophia's friends from Sicily come to visit and announce that their daughter Gina and Dorothy were switched at birth; Rose and Blanche take a Dirty Dancing class.

Crazy Continuity
Everyone recognizes Dominic as Vincenzo the guy in the wheelchair who helped remodel their garage and Freida Claxton has been reincarnated as Philomena. Also, Sophia once said Dorothy was born on a pinnacle table at McSorley's Bar so how could she have been switched at birth in the first place?

Musical Moments
Blanche: “Look into my eyes!”
Blanche and Rose dirty dance in the living room.

That’s What She Said
Blanche: “It was harder than I'd expected, but I'm sure that in time I'll be able to master the technique and absorb the subtleties.”

Lewd Ladies
Dorothy: “Let me get this straight. Blanche couldn't get the hang of dirty dancing but you could?”
Blanche: “Dorothy, now do you see why I'm so embarrassed? Can you imagine a dance with movements just like making love, and I can't do it??”
Dorothy: “Relax, Blanche. Maybe standing up is what's throwing you.”

Picture It
Sophia: “Let me remind you of something that may set your mind at ease.”
Dorothy: “Are you going to tell a story?”
Sophia: “No, I'm gonna sing a Negro spiritual. Shut up and listen. Do you remember the first day you went to school?”
Dorothy: “No.”
Sophia: “I do. You looked so adorable in that pink and white polka-dot dress. I loved that dress. Even after you outgrew it, it was tucked away in an upstairs closet for years.”
Dorothy: “You put it away for sentimental reasons?”
Sophia: “No, your brother Phil hid it there. He used to like to wear it when he visited the firehouse. Anyway, we got to the school and I walked you to your classroom, and as I turned to go you started to cry, 'Mommy! Mommy! I want Mommy.' But the teacher told me to go, so I did, and I left you there screaming, crying, with the tears pouring down your face… It took a good half-hour to calm you down, but that didn't last long. Every time the teacher turned her back, little Debbie Tansen did something she shouldn't. Of course, her mother was the same way every time her father turned his back. The woman was a real tramp… So, there's Debbie putting gum in your hair, hiding your lunch, stealing your toys when no one was looking. When I come to pick you up, I figure you'll say you never wanna go to school again. But what do you tell me? You love it. You made a new friend named Debbie.”
Dorothy: “Ma, what the hell does this have to do with? Wait a minute. Wait a minute. How did you know what happened? I mean if the teacher didn't see Debbie-”
Sophia: “I saw. I stood at the window and watched you for four hours, in case you needed me.”
Dorothy: “You didn't.”
Sophia: “No big deal. Any real mother would do that for her kid.”

Zbornak Zingers
Dominic: “Don't raise your voice at your mama. You know, you're not too old for me to take you across my knee!”
Dorothy: “You lay a finger on me, your teeth will be back in Sicily before you are.”

Insult Watch
Blanche: “This flier that came in the mail says they're gonna start a dirty dancing course down at Lawson's dance studio. What do you say, Dorothy?”
Dorothy: “Oh, no. I can't see myself swinging my hips and wildly gyrating my pelvis. I am not interested.”
Sophia: “And the world heaves a collective sigh of relief.”

Sassy Sophia
Dorothy: “I don't need a blood test to tell me who my mother is. A mother is someone who raises you and loves you and is always there for you. I don't need any more proof than that.”
Sophia: “Me neither. I raised her, and I was the one who got her through that awkward period. The 50 toughest years of my life.”

Best of B.E.D.
Blanche: “You know Rose, all that dancing has just done wonders for me. I feel so energized. I feel so alive. I feel like working this body up into a manic frenzy.”
Rose: “Well, great. We still have time to get to class.”
Blanche: “Oh who cares about class! The circus is in town. I say we go look up the Flying Fanelli Brothers.”

Sweet, Single-Digit-IQ Rose
Rose: “Will the Boscos be staying with us, Sophia?”
Sophia: “Unless there's a bidding war with the neighbors.”
Rose: “Well, even if we lose, at least they'll be close by.”

Philomena: “After Gina take her blood test for her marriage we find out it is not possible she is related to us. At the hospital there must have been some mix-up.”
Blanche: “You mean they switched the babies??”
Dorothy: “Oh, but this is ridiculous.”
Rose: “Absolutely. We can prove it. Dorothy, show 'em your driver's license.”

What, We Can't Learn From History?
Rose: “Blanche, if you can't do a simple dance, how do you expect me to believe that story about you and the Flying Fanelli Brothers?”
Blanche: “That was all true. To this day I get flushed every time I pass a jungle gym.”
Rose: “Oh, come on, Blanche. That story is no truer than the one you told about you and Buzz in the lunar module.”
Blanche: “Oh, that does it. Rose, I would never lie about the US Space Program.”

Reel References
Blanche: “Dorothy, have you ever heard of something called dirty dancing?”
Dorothy: “Well, of course, Blanche. They did it in that movie.”
Rose: “What movie?”
Dorothy: “Lawrence of Arabia, Rose.”

Golden Quotes
Woman with coffee: “Hospitals. Nothing ever works the way it's supposed to.”
Dorothy: “Wait a minute. Wait a minute. Just because a hospital vending machine screws up a lousy cup of coffee doesn't mean the hospital did anything wrong. Oh, sure, a mistake like getting two babies mixed up makes the headlines. But the point is - statistics back me up - hospitals are remarkably efficient institutions. I mean, seriously. How often does a hospital mix up two babies? Have you ever heard of such a thing?? WELL HAVE YOU???”
Woman with coffee: “Are you here for the methadone program?”

Blanche: “Hi, girls. This is not what it looks like.”
Sophia: “What they do is their business, but if I ever see your hand on Rose's behind it'll kill me.”


I am I the only who gets weirded out by the fact that Sophia leaves her blood test results ripped up on a table in the waiting room? Like isn't there important information on there? But I digress. One thing most Golden Girls fans always appreciate when it comes to this show is the parent-child relationship that is so well-developed between Sophia and Dorothy. If “Two Rode Together” was a great example of the chemistry between Estelle Getty and Bea Arthur, than “Foreign Exchange” proves it without a shadow of a doubt. The mother-daughter dynamic here is phenomenal without ever being overly sappy. This is truly one of my favorite episodes. When Gina shows up as the exact same height as Sophia, and in the same outfit and with the same purse it's such a hilarious bit of great casting and costuming. Dorothy being a nervous wreck while Sophia treats the situation calmly is simply great. Her teasing Dorothy about the test results is a perfectly dark moment with such a funny payoff. These two ladies must have been wizards because what they have on screen is magical. And let's not forget the dirty dancing subplot that obviously is only an excuse to get Rose and Blanche to dance together in neon colored stretch pants. It's a hilarious, fan-favorite moment. So many good moments and lines here, this is a real classic. GRADE: A
Posted by Chris at 4:08 PM